The process of using the Stoic journaling app is simple: You open the app in the morning and the evening, when you’ll be prompted to answer a couple of questions and perform a few simple exercises.

For example, this evening the app asked me to rate my current level of fulfillment and to identify what made me smile today, while also pointing me to guided exercises like journaling and breathing.

Stoic is part of the current batch of startups at Y Combinator (it’s taking the stage today at Demo Day). Founder Maciej Lobodzinski told me that his goal is to help users understand the different factors influencing their mental and emotional state.

“The core of the app is: We have this insight and we see what influences your mood and what you feel,” Lobodzinski said. He suggested that this is very different from the “super transactional” idea embedded in my other mental health and wellness apps, where “you pay for my app and you feel better.” In his view, “You should feel how you feel. It’s okay, how you feel, but you should know why you are feeling this way.”

So once there are a couple of weeks of data in the app, you should be able to look back and see how you were feeling on a certain day, and if there were activities that made you feel more or less fulfilled. Over time, Lobodzinski hopes to add more insights about “what influenced you, why you feel this way, why you are productive.” 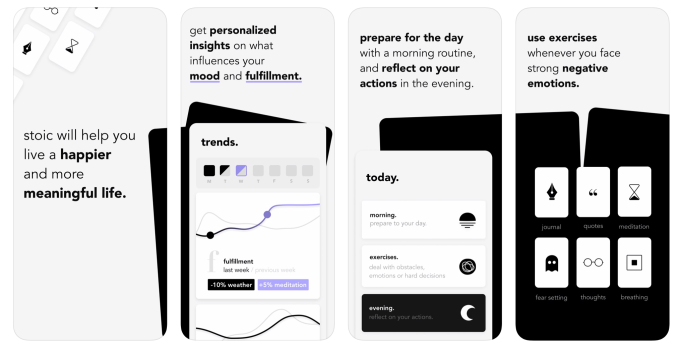 As the name implies, Stoic is inspired by Lobodzinski’s interest in classical Stoic philosophy (he’s not the first to suggest that the approach has direct applications in the tech industry), and the app even includes quotes from Stoic philosophers.

“It’s an extremely practical framework,” he said. “When I talk to users, there are entrepreneurs, investors, traders — people who found out about the app because they were looking for how to deal with their stress …
If you are stressed with your everyday life and you can get the advice of the emperor of Rome, who dealt with much more serious things, it’s amazing how much better you can feel after that.”

At the same time, users have the option to receive quotes from different schools of thought — not just Stoicism but also Buddhism, Taoism and Catholicism. For some users, their app experience won’t be explicitly focused on Stoicism, but Lobodzinski said that even then, it forms the “spine” of the app’s approach.

The basic app is free, but Stoic charges $27.99 per year for a premium version that includes iCloud syncing and additional content.

Calm raises $27M to McConaughey you to sleep