Roku’s home entertainment hub, The Roku Channel, is expanding into programming for children. The company this morning announced plans to aggregate kids and family movies and TV alongside the channel’s other content, including its free, ad-supported movies and television, live TV and subscriptions. In addition to the launch of the new “Kids & Family” section on The Roku Channel, Roku is also rolling out Parental Control features to give parents more control over what their kids can watch when accessing the channel.

The latter — while useful for families who don’t want the kids stumbling upon their HBO or Cinemax subscriptions — will also be a hindrance when the parents go to watch their own shows in The Roku Channel, due to Roku’s current lack of user profiles.

Meanwhile, the new kids section is not home to original content, but rather takes advantage of Roku’s ability to aggregate the streaming content on its own platform — including both free content from other channels and digital creators, as well as kid-friendly content from the family’s paid subscriptions.

At launch, the Kids & Family section will offer 7,000 free, ad-supported TV episodes and movies from 20 partners, including Allspark (a Hasbro company), DHX Media, Happy Kids TV, Lionsgate, Mattel, Moonbug, pocket.watch and others. This will bring a mix of classic franchises and favorite characters to the channel, like Care Bears, The Cat in the Hat, Leapfrog, Little Baby Bum, My Little Pony, Rev & Roll, Super Mario Brothers, Thomas & Friends and more.

This content will be mixed in with live, linear streams from Moonbug, pocket.watch and XUMO-powered partners Ameba, BatteryPop and KidGenius. There also will be five exclusive episodes of Ryan’s World by pocket.watch available.

In addition, the new section can pull in premium content for kids from services like Blue Ant Media’s ZooMoo, CONtv, Dove Channel, HBO, Hopster, NOGGIN, Starz or Up Faith.

In total, there are nearly 30 partners participating in the Kids & Family section. Notably absent, however, are top sources for kids’ shows, like Netflix and Hulu. These larger streaming services want to own the user experience end-to-end and collect their own data. 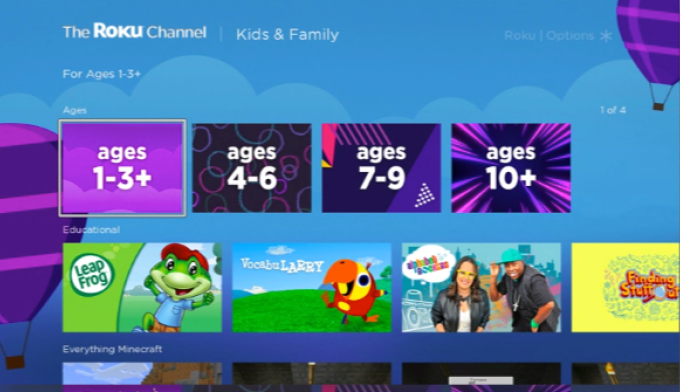 Roku says it will collect “non-user level data” from the new section, in order to see, in aggregate, which programs are popular. But it will not use data to personalize the experience for kids, target kids with ads, or make recommendations.

Instead, the content in the Kids & Family section is organized by age range, character and theme in an interface that resembles Netflix’s Kids’ profile layout.

The ad load is also lighter than elsewhere on The Roku Channel, the company says.

He adds that the advertisers are kid-appropriate, and are vetted and served internally by Roku.

Ad revenue is the only way the new section will be monetized. Roku tells us the premium content for kids will only be displayed to existing subscribers, as it’s not in the business of trying to upsell to children.

The launch follows several other recent developments for The Roku Channel, now one of Roku’s top five channels and a big selling point for Roku devices and TVs.

Since its 2017 launch, which focused on aggregating free movies, the company has expanded into news, sports, TV shows and other entertainment offerings both from traditional studios and digital networks, as well as paid subscriptions from networks like HBO, Cinemax, Showtime, Starz, EPIX and more.

Roku closed out its second quarter with 30.5 million active accounts, up by 1.4 million from the prior quarter, and revenue up 59% year-over-year, to $250.1 million. The company’s platform business is now the primary revenue driver, up 86% year-over-year to reach $167.7 million in the quarter. Users streamed 9.4 billion hours of content on Roku in Q2.

Media companies have been heavily investing in kids’ programming, especially in the cord-cutting era, which gives Roku a large library to tap into. However, the biggest names in kids’ streaming — like Netflix and soon, Disney (with Disney+) — will not participate in aggregated sections like this, which ultimately limits their ability to become a true one-stop-shop for everything you want to stream.

The Roku Channel update is rolling out in the U.S. today, on Roku devices, the web, the Roku mobile app and select Samsung smart TVs.