Just in time for back-to-school shopping, Nike today officially announced its entry into the subscription service market with the launch of a “sneaker club” for kids called Nike Adventure Club. The new program is specifically designed to make shopping easier for parents who struggle to keep up with their quickly growing children’s shoe needs. Instead of taking kids to the store and trying on pair after pair to try to find something the child likes, the new Nike Adventure Club will instead ship anywhere from four pairs to a dozen pairs of shoes per year, depending on which subscription tier parents choose.

However, even the minimum of four pairs per year may be too frequent for some parents of older kids.

Children over three years old grow one-half a foot size every 4 to 6 months. That means some older kids only need to replace their shoes twice per year, outside of excessive wear and tear.

That said, Nike allows parents to upgrade or downgrade their subscription at any time, or even put it on pause. 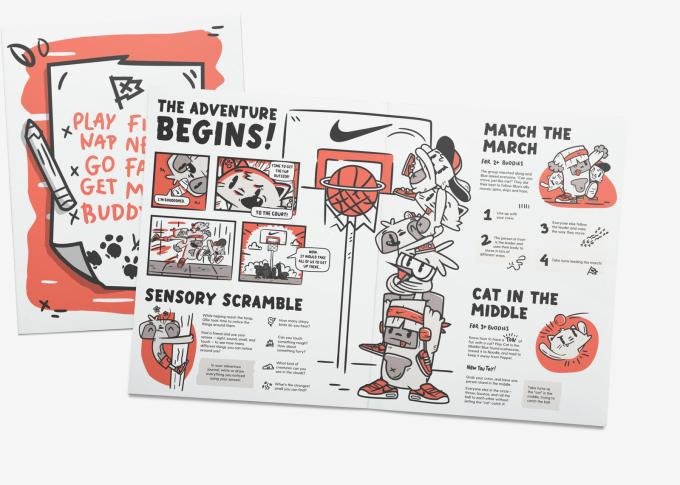 Once signed up, parents will receive an email with a selection of more than 100 styles of Nike and Converse shoes from which to choose, which they can review with their kids. They then pick which shoes they want to receive, and these are shipped to the home in a box with the child’s name on it. This box also includes an “adventure kit” filled with activities and games for parents to do with their kids, stickers, plus a small gift. The kit is created in partnership with the nonprofit KaBoom, which is focused on encouraging kids to lead healthy lifestyles.

If the shoes are the wrong size, exchanges are free within a week of delivery.

Perhaps the best part of the program is the recycling component.

Twice a year, Nike will ship out a prepaid bag where parents can send back their kids’ worn shoes, which will either be donated to families in need if in good condition or recycled through Nike Grind, a program that separates out the rubber, foam, leather and textile blends, grinds them into granules and incorporates those into new products, including footwear, apparel and play surfaces.

“We see Nike Adventure Club sits as having a unique place within Nike, and not just for it being the first sneaker club for kids,” says Dave Cobban, VP of Nike Adventure Club, in a statement about the launch. “It provides a wide range of options for kids, while at the same time, it removes a friction point for parents who are shopping on their behalf.”

Nike has been testing the program since 2017, when it was known as Easy Kicks. The test reached 10,000 members, the company said.

Nike isn’t the first to launch a subscription focused on kids — and big retailers have taken note. This year, Foot Locker took a minority stake in kids’ clothing subscription Rockets of Awesome and Walmart partnered with children’s clothing startup Kidbox.

Stitch Fix also offers a kids’ styling service. And Amazon offers a try-before-you-buy shopping service without a subscription, Prime Wardrobe. Amazon’s variation offers both girls’ and boys’ options where parents can fill a box with apparel, shoes and accessories for home try-on and easy returns.

Nike’s Adventure Club is launching today, but is easing in new customers via a waitlist option.