Launch vehicles and their enormous rocket engines tend to receive the lion’s share of attention when it comes to space-related propulsion, but launch only takes you to the edge of space — and space is a big place. Tesseract has engineered a new rocket for spacecraft that’s not only smaller and more efficient, but uses fuel that’s safer for us down here on the surface.

The field of rocket propulsion has been advancing constantly for decades, but once in space, there’s considerably less variation. Hydrazine is a simple and powerful nitrogen-hydrogen fuel that’s been in use since the ’50s, and engines using it (or similar “hypergolic” propellants) power many a spacecraft and satellite today.

There’s just one problem: Hydrazine is horribly toxic and corrosive. Handling it must be done in a special facility, using extreme caution and hazmat suits, and very close to launch time — you don’t want a poisonous explosive sitting around any longer than it has to. As launches and spacecraft multiply and costs drop, hydrazine handling remains a serious expense and danger.

Alternatives for in-space propulsion are being pursued, like Accion’s electrospray panels, Hall effect thrusters (on SpaceX’s Starlink satellites) and light sails — but ultimately, chemical propulsion is the only real option for many missions and craft. Unfortunately, research into alternative fuels that aren’t so toxic hasn’t produced much in the way of results — but Tesseract says the time has come.

“There was some initial research done at China Lake Naval Station in the ’90s,” said co-founder Erik Franks, but it fizzled out when funds were reallocated. “The timing also wasn’t right because the industry was still dominated by very conservative defense contractors who were content with the flight-proven toxic propellant technology.” 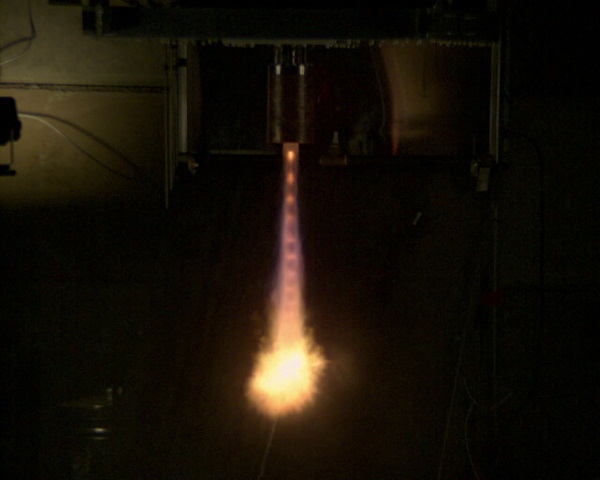 The lapsed patents for these systems, however, pointed the team in the right direction. “The challenge for us has been going through the whole family of chemicals and finding which works for us. We’ve found a really good one — we’re keeping it as kind of a trade secret but it’s cheap, and really high-performance.”

You wouldn’t want to rinse your face with it, but you can fuel a spacecraft wearing Gore-Tex coveralls instead of a hermetically sealed hazmat suit. Accidental exposure doesn’t mean permanent tissue damage like it might with hydrazine.

The times have changed, as well. The trend in space right now is away from satellites that cost hundreds of millions and stay in geosynchronous orbit for decades, and toward smaller, cheaper birds intended to last only five or 10 years.

More spacecraft being made by more people makes safer, greener alternatives more attractive, of course: lower handling costs, less specialized facilities and so on further democratize the manufacturing and preparation processes. But there’s more to it than that.

If all anyone wanted was to eliminate hydrazine-based propulsion, they could replace the engine with an electric option like a Hall effect thruster, which gets its thrust from charged particles exiting the assembly and imparting an infinitesimal force in the opposite direction — countless times per second, of course. (It adds up.)

But these propulsion methods, while they have a high specific impulse — a measurement of how much force is generated per unit of fuel — they produce very little thrust. It’s like suggesting someone take a solar-powered car with a max speed of 5 MPH instead of a traditional car with a V6. You’ll get there, and economically, but not in a hurry.

Consider that a satellite, once brought to low orbit by a launch vehicle, must then ascend on its own power to the desired altitude, which may be hundreds of kilometers above. If you use a chemical engine, that could be done in hours or days, but with electric, it might take months. A military comsat meant to stay in place for 20 years can spare a few months at the outset, but what about the thousands of short-life satellites a company like Starlink plans to launch? If they could be operational a week after launch rather than months, that’s a non-trivial addition to their lifespan.

“If you can get rid of the toxicity and handling costs of conventional chemical propulsion, but maintain performance, we think green chemical is a clear winner for the new generation of satellites,” Franks said. And that’s what they claim to have created. Not just on paper either, obviously; here’s a video of a fire test from earlier this year.

“It’s also important at end of life, where doing a long, slow spiral deorbit, repeatedly crossing the orbits of other satellites, dramatically increases the risk of collision,” he continued. “For responsibly managing these large, planned constellations the ability to quickly deorbit at end of life will be especially important to avoid creating an unsustainable orbital debris problem.”

Tesseract has only seven full-time employees, and was a part of Y Combinator’s Summer 2017 class. Since (and before) then they’ve been hard at work engineering the systems they’ll be offering, and building relationships with aerospace. 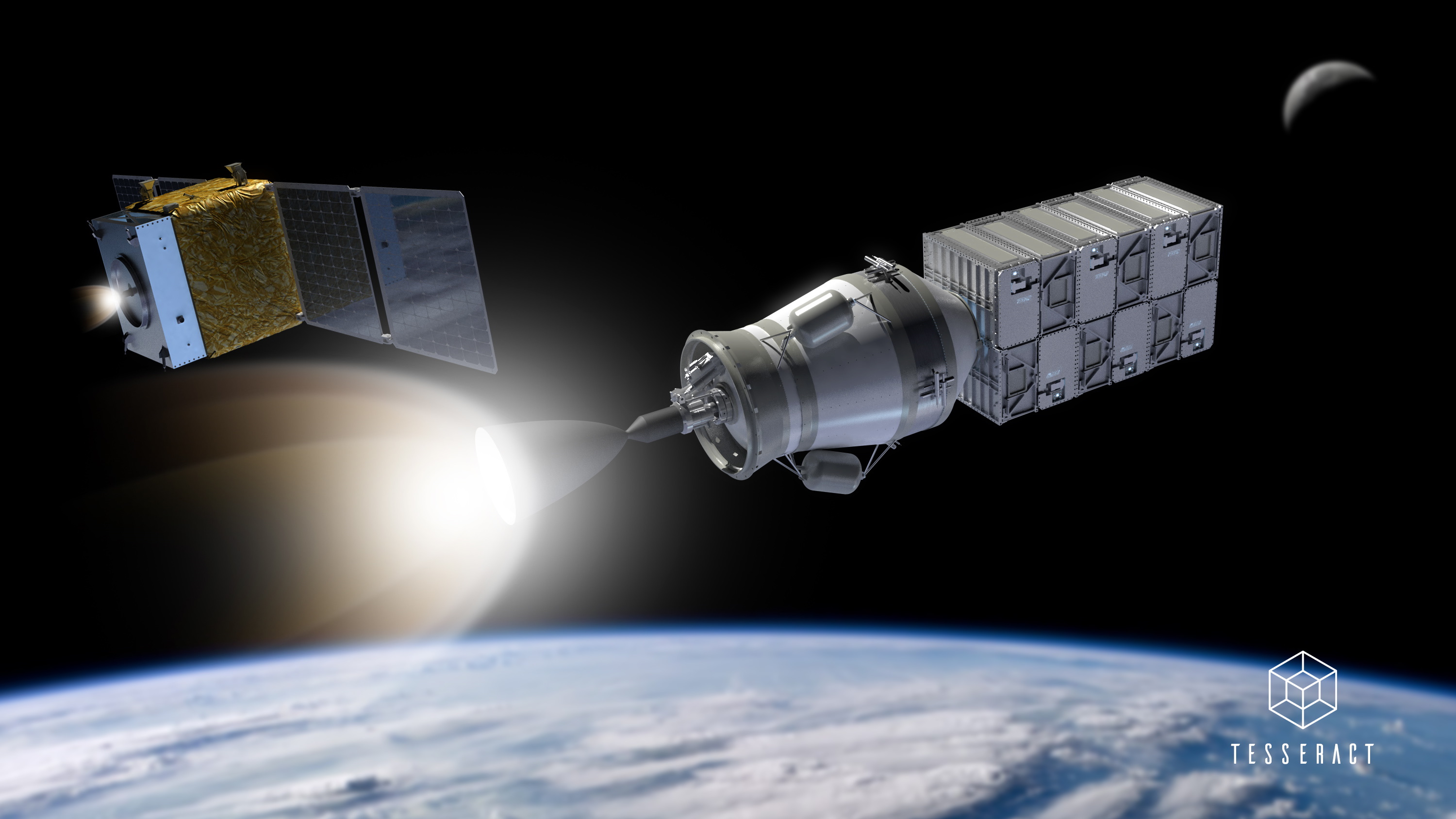 A render of Tesseract’s two flagship products — Adhara on the left and Polaris on the right.

They’ve raised a $2 million seed round, but you don’t have to be a rocket scientist to know that’s not the kind of money that puts things into space. Fortunately, the company already has its first customers, one of which is still in stealth but plans to launch a Moon mission next year (and you better believe we’re following up on that hot tip). The other is Space Systems/Loral, or SSL, which has signed a $100 million letter of intent.

There are two main products Tesseract plans to offer. Polaris is a “kickstage,” essentially a short-range spacecraft used to deliver satellites to more distant orbits after being taken up to space by a launch vehicle. It’s powered by the company’s larger Rigel engines; this is the platform purportedly headed to the Moon, and you can see it propelling a clutch of 6U smallsats on the right in the image above.

But Franks thinks the money is elsewhere. “The systems we think will be a bigger market opportunity are the smallsat propulsion systems,” he said. Hence the second product, Adhara, a propulsion bus for smaller satellites and craft that the company is focusing on keeping straightforward, compact and, of course, green. (It’s the smaller rig in the image above; the thrusters are named Lyla.)

“We’ve heard from customers that complete, turnkey systems are what they mostly want, rather than buying components from many vendors and doing all the systems integration themselves like the old-school satellite manufacturers have historically done,” Franks said. So that’s what Adhara is for: “Keep it simple, bolt it on there, let it maneuver where it needs to go.”

Engineering these engines was no cakewalk, naturally, but Tesseract wasn’t reinventing the wheel. The principles are very similar to traditional engines, so development costs weren’t ridiculous.

The company isn’t pretending these are the only solutions that make sense now. If you need to have the absolute lowest mass or volume dedicated to propulsion, or don’t really care if it takes a week or a year to get where you’re going, electric propulsion is still probably a better deal. And for major missions that require high delta-V and don’t mind dealing with the attendant dangers, hydrazine is still the way to go. But the market that’s growing the most is neither one of these, and Tesseract’s engines sit in a middle ground that’s efficient, compact and far less dangerous to work with.