GDPR, the European data privacy regulations, have been in effect for more than a year, but it’s still a challenge for companies to comply. Ethyca, a New York City startup, has created a solution from the ground up to help customers adhere to the regulations, and today it announced a $4.2 million investment led by IA Ventures and Founder Collective.

At its heart, Ethyca is a data platform that helps companies discover sensitive data, then provides a mechanism for customers to see, edit or delete their data from the system. Finally, the solution enables companies to define who can see particular types of data across the organization to control access. All of these components are designed to help companies comply with GDPR regulations. 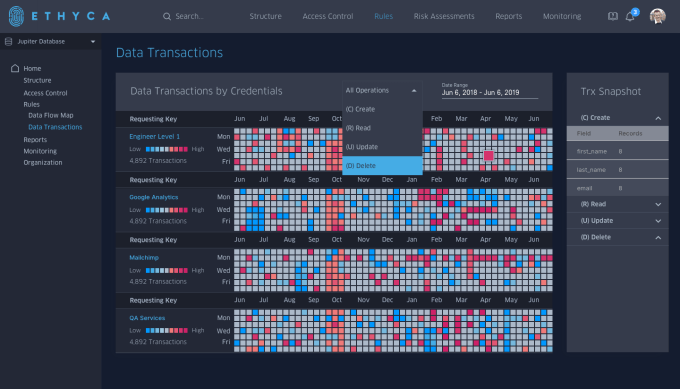 Company co-founder Cillian Kieran says that the automation component is key and should greatly reduce the complexity and cost associated with complying with GDPR rules. From his perspective, current solutions that involve either expensive consultants or solutions that require some manual intervention don’t get companies all the way there.

“These solutions don’t actually solve the issue from an infrastructure point of view. I think that’s the distinction. You can go and use the consultants, or you can use a control panel that tells you what you need to do. But ultimately, at some point you’re either going to have to build or deploy code that fixes some issues, or indeed manually manage or remediate those [issues]. Ethyca is designed for that and takes away those risks because it is managing privacy by design at the infrastructure level,” Kieran explained.

If you’re worried about the privacy of providing information like this to a third-party vendor, Kieran says that his company never actually sees the raw data. “We are a suite of tools that sits between business processes. We don’t capture raw data, We don’t see personal information. We find information based on unique identifiers,” he said.

The company has been around for more than a year, but has been spending its first year developing the solution. He sees this investment as validation of the problem his startup is trying to solve. “I think the investment represents the growing awareness fundamentally from both with the investor community, and also in the tech world, that data privacy as a regulatory constraint is real and will compound itself,” he said.

He also points out that GDPR is really just the tip of the privacy regulation iceberg, with laws in Australia, Brazil and Japan, as well as California and other states in the U.S. due to come online next year. He says his solution has been designed to deal with a variety of privacy frameworks beyond GDPR. If that’s so, his company could be in a good position moving forward.