Founded in Russia and now headquartered in New York, InDriver’s mobile app allows passengers to name their own fare for nearby drivers to accept, decline or counter. The startup operates in 200 cities, is used by 26 million people and has raised $15 million in two rounds from Leta Capital, according to a release, Crunchbase and a company spokesperson.

InDriver entered Latin America and Tanzania in 2018. The startup sees a value proposition for Africa based around urbanization, demographics and some of the unique characteristics of its platform.

“We think Africa is going to be a big market for us because there’s a lot of cities and high population [areas] that still don’t have access to ride-hail applications,” InDriver’s Chief Marketing Officer Egor Fedorov told TechCrunch on a call.

He believes InDriver can reach an additional market segment in African cities — one that may overlook other ride-hail options that require cards to sign up or don’t feature bidding. The startup’s mobile app allows for cash payment, and InDriver views itself more as an IT service than a taxi company, according to Federov. The company does not directly finance or brand cars in Africa. InDriver charges a percentage of each ride to generate revenue and doesn’t currently take commission from drivers in Africa, though it does in other markets.

For now, InDriver will stick to car-based taxi service in Africa (with no immediate plans to enter the motorcycle taxi space) or add things it does in other markets, such as truck rental services. 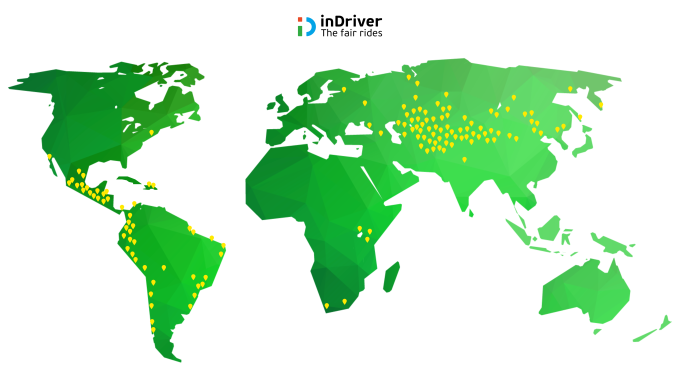 On marketing outreach for Kampala, InDriver will rely primarily on word-of-mouth gained by (what it projects as) cheaper prices and bringing price negotiation (common to the continent’s taxi markets) to a quick and controlled online process.

InDriver’s Uganda expansion comes at a time when Africa’s ride-hail markets are becoming a multi-wheeled, pan-African and global affair. A lot of VC is accumulating and expansion is happening around the continent’s online car taxis, moto-taxi startups and car and motorcycle delivery services.

On the local level, Ethiopian auto-taxi startup ZayRide announced it will expand to West Africa in August.

MAX.ng raises $7M round backed by Yamaha and pilots EVs in Nigeria

And Uganda-based motorcycle ride-hail company SafeBoda expanded into Kenya and recently raised a Series B round, co-led by the venture arms of Germany’s Allianz and Indonesia’s Go-Jek.

So whether by two wheels or four, Africa’s on-demand transit market is moving rapidly. Time, attrition and burn rate will tell which startups — including InDriver — can stay in the race for market share or are forced off the road.