Microsoft in 2017 said it would eventually shut down Wunderlist, a company it acquired, in order to forge ahead with its own “to do” app. It has since launched To-Do, as the app is called, on Windows, iOS, Android and the web and expanded its feature set. Today, it’s bringing the app to the Mac, as well.

The company announced this morning its To-Do app is live on the Mac App Store, where it will support most of the core features right away, including the ability to create and manage tasks, work offline, share lists, utilize tags and more. It also will integrate with Microsoft Outlook to pull in your “Flagged” email list and will support integration with Planner soon, allowing you to see any items assigned to you.

The Mac version also takes advantage of its new platform to offer a handful of keyboard shortcuts, like ⌘2 to minimize the app so it only displays the list view, and ⌘1 to return to viewing all your lists. You can click on a task’s text to edit it directly from the list view, as well. 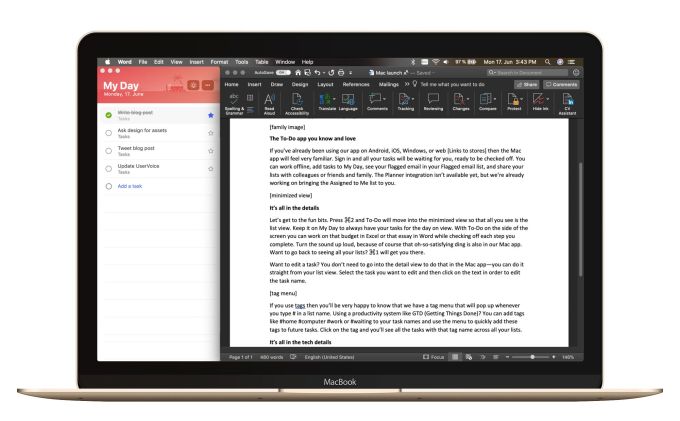 At Apple’s Worldwide Developer Conference this month, the company announced a new set of tools — called Project Catalyst — that allow developers to bring their iPad apps to the Mac by leveraging their existing codebase. This is expected to bring more Mac apps to Apple’s Mac App Store over time, as it simplifies the process of maintaining multiple apps for various platforms. Twitter, for example, said on Friday that it would leverage Project Catalyst to bring its app back to the Mac.

A big question now is what today’s news will mean for Wunderlist — an app that has a near-perfect 4.9 out of 5 stars rating on the Mac App Store and is the No. 21 most popular free app in the store’s Productivity category.

As of today’s launch, Microsoft To-Do has seen a surge of downloads and jumped ahead of its predecessor — it now claims the No. 11 spot in the same category (as of the time of writing).

Microsoft had earlier promised that it wouldn’t close down Wunderlist until it was confident that it has “incorporated the best of Wunderlist into To-Do.” Some of the company’s initial concerns were adding support for list sharing in To-Do and rolling out support for all platforms — which Microsoft has now done with this Mac app launch.

We asked Microsoft if it will comment on its updated plans for Wunderlist as a result of this launch.

“We’re not currently working on new features for Wunderlist as we’re concentrating on our new app, Microsoft To-Do,” a spokesperson said. “Once we are confident that we have incorporated the best of Wunderlist into Microsoft To-Do, we will retire Wunderlist,” they added.

This is generally the same statement the company made years ago, so it doesn’t add much clarity to the situation.

In the meantime, the new Mac version of To-Do is a free download from the Mac App Store here.