Background noise on calls could be a thing of the past if Krisp has anything to do with it. The app, now available on Windows and Macs after a long beta, uses machine learning to silence the bustle of a home, shared office or coffee shop so your voice and the voices of others comes through clearly.

I first encountered Krisp in prototype form when we were visiting UC Berkeley’s Skydeck accelerator, which ended up plugging $500,000 into the startup alongside a $1.5 million round from Sierra Ventures and Shanda Group.

Like so many apps and services these days, Krisp uses machine learning. But unlike many of them, it uses the technology in a fairly straightforward, easily understandable way.

The machine learning model the company has created is trained to recognize the voice of a person talking into a microphone. By definition pretty much everything else is just noise — so the model just sort of subtracts it from the waveform, leaving your audio clean even if there’s a middle school soccer team invading the cafe where you’re running the call from. 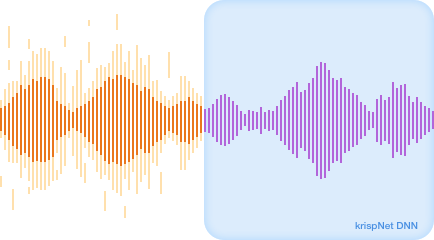 It can also mute sound coming the other direction — that is, the noise on your friend’s side. So if they’re in a noisy street and you’re safe at home, you can apply the smart noise reduction to them as well.

Because it changes the audio signal before it gets to any apps or services, it’s compatible with pretty much everything: Skype, Messenger, Slack, whatever. You could even use it to record podcasts when there’s a leaf blower outside. A mobile version is on the way for release later this year.

It works — I’ve tested it, as have thousands of other users during the beta. But now comes the moment of truth: will anyone pay for it?

The new, official release of the app will let you mute the noise you hear on the line — that is, the noise coming from the microphones of people you talk to — for free, forever. But clearing the noise on your own line, like the baby crying next to you, after a two-week trial period, will cost you $20 per month, or $120 per year, or as low as $5 per month for group licenses. You can collect free time by referring people to the app, but eventually you’ll probably have to shell out.

Not that there’s anything wrong with that: A straightforward pay-as-you-go business model is refreshing in an age of intrusive data collection, pushy “freemium” platforms and services that lack any way to make money whatsoever.