YouTube is a confusing mess of an internet platform. In what appears to be a moment that draws a line in the sand around how online platforms regulate content, YouTube has told a gay reporter that homophobic harassment he received from a prominent conservative channel does not violate its policies.

The company told Vox reporter Carlos Maza that comments from Steven Crowder, who has over 3.8 million subscribers, that focused on his sexuality and ethnicity are within its rules. The Google-owned video platform, which claims two billion monthly users, said on Twitter that it spent “the last few days” looking into a complaint lodged by Maza, who alleges that Crowder taunted him with racist and homophobic comments.

Yet, despite admitting that Crowder used “language that was clearly hurtful,” the company said that the show has acted within its boundaries. That means the videos remain on the site, and Crowder’s channel will not be punished.

(1/4) Thanks again for taking the time to share all of this information with us. We take allegations of harassment very seriously–we know this is important and impacts a lot of people.

Here’s what the company told Maza on Twitter in full:

(1/4) Thanks again for taking the time to share all of this information with us. We take allegations of harassment very seriously–we know this is important and impacts a lot of people.

(2/4) Our teams spent the last few days conducting an in-depth review of the videos flagged to us, and while we found language that was clearly hurtful, the videos as posted don’t violate our policies. We’ve included more info below to explain this decision:

(3/4) As an open platform, it’s crucial for us to allow everyone–from creators to journalists to late-night TV hosts–to express their opinions w/in the scope of our policies. Opinions can be deeply offensive, but if they don’t violate our policies, they’ll remain on our site.

(4/4) Even if a video remains on our site, it doesn’t mean we endorse/support that viewpoint.

There are other aspects of the channel that we’re still evaluating– we’ll be in touch with any further updates.

When contacted for comment, YouTube referred TechCrunch to its tweets but it did provide additional color. A spokesperson said that Crowder had asked viewers not to harass Maza, while it said that the YouTube host had not revealed his personal information.

That is true but, in a sign of the complexities around online communities, Crowder fans did doxx Maza last year. That resulted in a barrage of messages demanding that the Vox reporter “debate” with Crowder.

“It makes life sort of miserable. I waste a lot of time blocking abusive Crowder fanboys, and this shit derails your mental health,” wrote Maza.

Crowder, meanwhile, couched the situation as being about a larger battle between established media, such as Vox, and independent creators like his channel.

“This isn’t about me versus some guy at Vox. This is an example of a giant corporate media entity trying to silence voices that they don’t like,” he said in a video published on May 31.

“This is David versus Goliath,” he added. 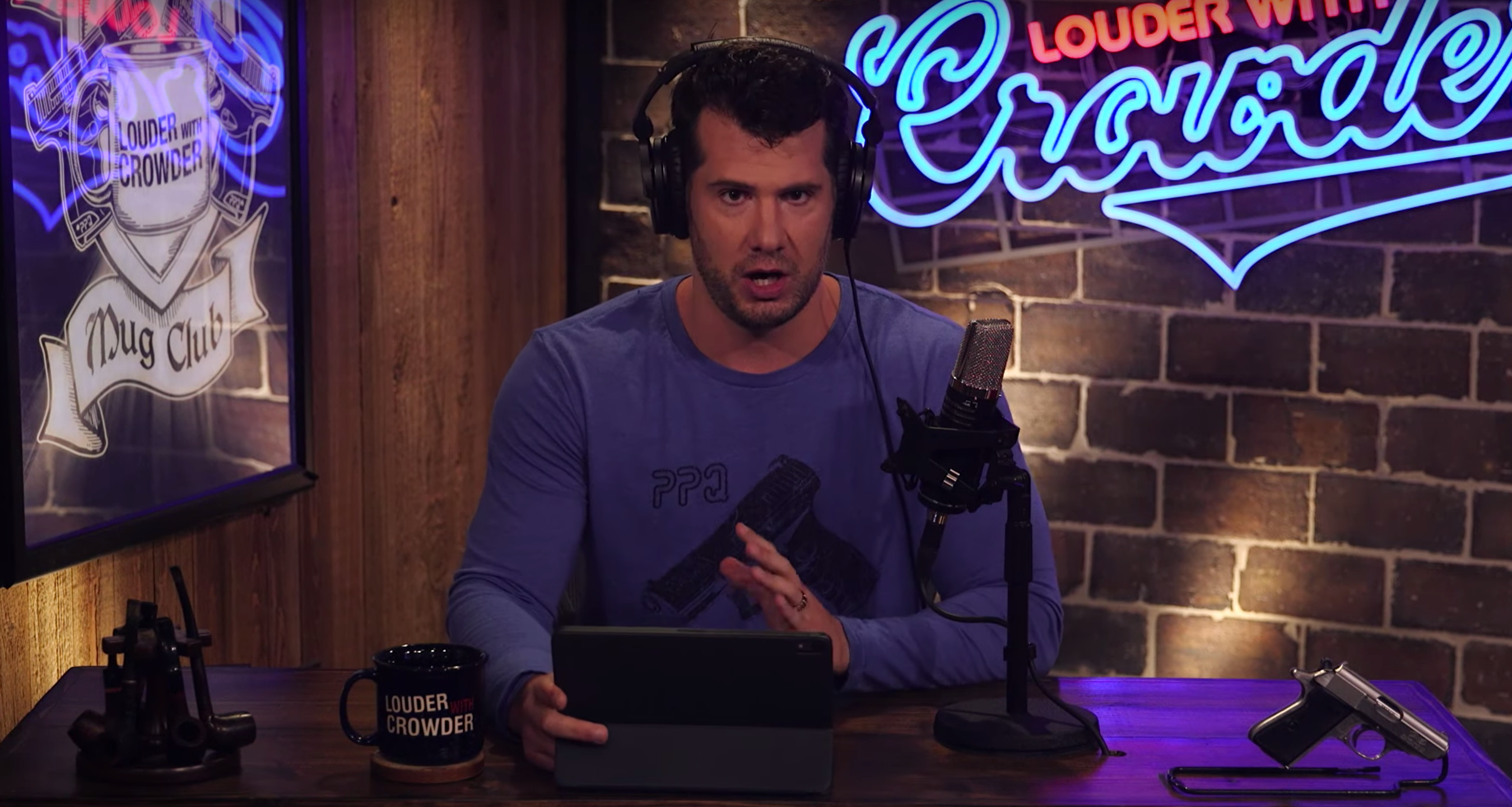 The YouTuber admitted making comments that reference Maza’s sexuality and race — which include “the gay Latino host at Vox” and “lispy queer” — but he dismissed them as “friendly ribbing.” Crowder argued that because Maza identifies as Latino and gay on the internet — his Twitter handle is @gaywonk, for example — it is just “harmless” banter.

Beyond comments, Crowder also sells a range of merchandise, including t-shirts, which generate revenue for the YouTube Channel. The collection includes t-shirts that are labeled “Socialism Is For Fgs” — indeed that slogan has been adapted by Crowder fans to read “Carlos Maza Is A Fg,” as Maza himself has pointed out.

Crowder’s online store is powered by Shopify, which outlaws its service being used for “hateful content,” including discrimination based on sexual orientation, according to its terms and conditions. 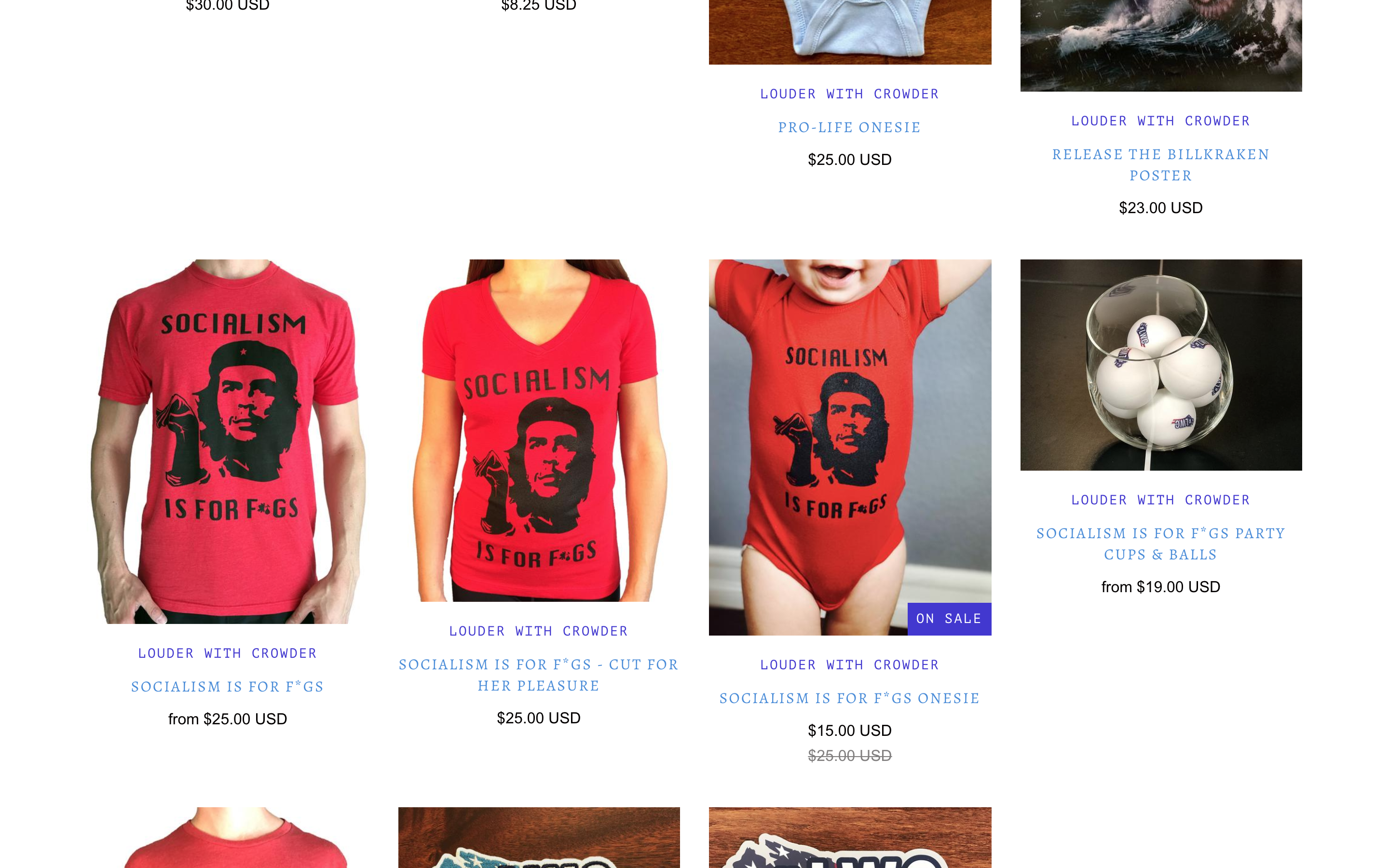 Despite Crowder’s claims of victimization, clips shared by Maza paint a different picture of the rhetoric used on his show.

Some choice quotes from Crowder include: “You’re being given a free pass as a crappy writer because you’re gay,” and a number of derogatory references to his ethnicity.

Since I started working at Vox, Steven Crowder has been making video after video "debunking" Strikethrough. Every single video has included repeated, overt attacks on my sexual orientation and ethnicity. Here's a sample: pic.twitter.com/UReCcQ2Elj

“These videos get millions of views on YouTube. Every time one gets posted, I wake up to a wall of homophobic/racist abuse on Instagram and Twitter,” Maza said.

The kicker for this, however, is that YouTube calls Crowder’s comments “clearly hurtful” and that’s an exact term used within its harassment and cyberbullying policy. According to that policy, “content that makes hurtful and negative personal comments/videos about another person” will be removed with the channel owner warned. YouTube’s three-strike rule then comes into effect for channels.

hello @TeamYoutube, youtuber here who is somewhat confused by your moderation policies. wanna help me out here? pic.twitter.com/QjmyeQ0s5b

It is not clear how or why YouTube did not take action based on that policy breach.

YouTube did not respond to a request for clarification.

This episode appears to mark a crisis moment for YouTube, as it continues to grapple with the demands of policing its service, particularly since it has become the go-to place for “far right” figures like Crowder to connect with their audience. Despite some in that community claiming YouTube, and other internet companies, are biased against them, Maza maintains that Crowder’s large following and conservative focus is precisely why YouTube is not taking action.

In an April interview with the New York Times, YouTube CEO Susan Wojcicki said the company would lessen its focus on juicing numbers and generating revenue to instead focused on “responsible growth.”

“To boil it down: YouTube wants to remove the content that violates its policies more quickly and effectively; promote better, more authoritative material and limit the spread of videos that are potentially harmful but do not break the rules,” the Times wrote.

Despite the soundbites, there’s little evidence that Wojcicki can deliver on that promise.