It’s business as usual for Alibaba after the Chinese e-commerce giant bounced back from a lackluster Q3 — which saw its slowest growth for three years. For Q4, the company saw revenue surge 51% year-on-year to reach 93.5 billion RMB, or $13.9 billion.

That revenue beat analyst expectations of 91.5 billion RMB, according to Barons, and net income came in at 23.38 billion RMB, or $3.48 billion.

Alibaba positions itself as the gateway to Chinese consumers, and it continues to grow. The company said its mobile monthly users — a metric it uses to measure shoppers — reached 721 million in March, an increase of 22 million in three months and 104 million over the last year. Annual active users were up 18% to 654 million and the company’s Chinese marketplaces saw GMV — the value of total goods sold — rise by 19% year-on-year in its fiscal 2018.

Speaking on a call with analysts, executive chairman Joe Tsai claimed Alibaba is ideally placed to capitalize on China’s switch from an export economy to domestic consumption, despite the ongoing U.S.-China trade war.

“China is opening its markets to more foreign businesses to satisfy the demands of Chinese consumers,” he said. “We have the reach and deep insights… our scale and access to Chinese consumers is simply unrivaled.” 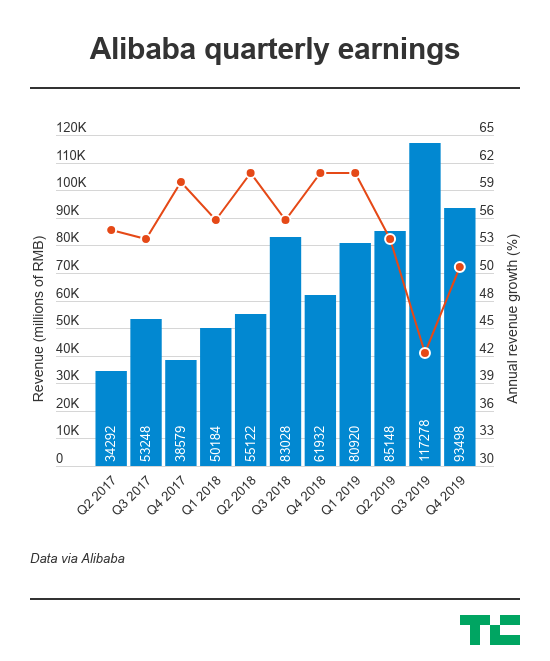 On the earnings call, CEO Daniel Zhang explained that the impressive results were because of improved conversion rates — thanks to a new app interface featuring more recommendations and video content, an increase in retailer product launches and general user/shopper growth.

A big part of that growth focus is on consumers in more rural areas. Indeed, over the past year, more than 70% of the increase in annual active consumers was from less developed cities, Tsai said, adding that spending in tier-three, four and five cities is projected to triple to $7 trillion in the coming years. Alibaba clearly believes it can take a large bite of this, despite rivals including Pinduoduo focusing intensely on rural Chinese consumers.

The user growth also arises from Alibaba’s hold on its range of businesses and its ability to channel traffic between them. For example, its online e-commerce app Taobao and e-wallet Alipay brought about 30% of total orders to Ele.me, the food delivery service competing head-on with Tencent-backed Meituan Dianping.

Outside of China, Lazada in Southeast Asia and internationally-focused Aliexpress clocked a cumulative 120 million shoppers over the past year although Alibaba is, again, not giving many more details on either service.

Cloud has been a major growth vertical for Alibaba, and once again that proved true, although growth is tapering as the business grows larger. Alibaba Cloud, which is ranked as China’s top cloud service with 42.9% market share according to IDC, grew by 76% annual to hit 7.73 billion RMB, or $1.15 billion. Alibaba claimed the cloud business services over half of China’s A-listed companies.

Outside its core online retail business, Alibaba continues its big bet on brick-and-mortar retail. Its own supermarket chain, Freshhippo (formerly Hema), reached 135 stores, dwarfing its rival JD.com’s counterpart 7Fresh, which operates fewer than 15 locations. Digital entertainment is another cash-guzzling business for Alibaba, although the firm once again refrained from revealing user numbers for its video streaming service Youku, once a pioneer in the industry.