Facebook has quietly removed three far-right networks that were engaged in coordinated inauthentic behavior intended to spread politically divisive content in Spain ahead of a general election in the country, which takes place on Sunday.

The networks had a total reach of almost 1.7 million followers and had generated close to 7.4 million interactions in the past three months alone, according to analysis by the independent group that identified the bogus activity on Facebook’s platform.

The fake far-right activity was apparently not picked up by Facebook.

Instead, activist not-for-profit Avaaz unearthed the inauthentic content, and presented its findings to the social networking giant earlier this month, on April 12. In a press release issued today, the campaigning organization said Facebook has now removed the fakes — apparently vindicating its findings.

“Facebook did a great job in acting fast, but these networks are likely just the tip of the disinformation iceberg — and if Facebook doesn’t scale up, such operations could sink democracy across the continent,” said Christoph Schott, campaign director at Avaaz, in a statement.

“This is how hate goes viral. A bunch of extremists use fake and duplicate accounts to create entire networks to fake public support for their divisive agenda. It’s how voters were misled in the U.S., and it happened again in Spain,” he added.

We reached out to Facebook for comment but at the time of writing the company had not responded to the request or to several questions we also put to it.

Examples of the inauthentic content can be viewed in Avaaz’s executive summary of the report. They include fake data about foreigners committing the majority of rapes in Spain; fake news about Catalonia’s pro independence leader; and various posts targeting left-wing political party Podemos — including an image superimposing the head of its leader onto the body of Hitler performing a Nazi salute.

One of the networks — which Avaaz calls Unidad ​Nacional Española (after the most popular page in the network) — was apparently created and coordinated by an individual called ​Javier Ramón Capdevila Grau, who had multiple personal Facebook accounts (also) in contravention of Facebook’s community standards.

This network, which had a reach of more than 1.2 million followers, comprised at least 10 pages that Avaaz identified as working in a coordinated fashion to spread “politically divisive content.”

Its report details how word-for-word identical posts were published across multiple Facebook pages and groups in the network just minutes apart, with nothing to indicate they weren’t original postings on each page.

Here’s an example post it found copy-pasted across the Unidad ​Nacional Española network: 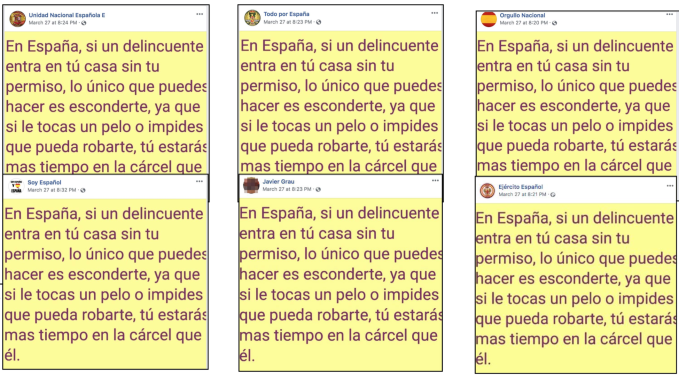 Translated the posted text reads: “In Spain, if a criminal enters your house without your permission the only thing you can do is hide, since if you touch a hair on his head or prevent him from being able to rob you you’ll spend more time in prison than him.”

A third network, Lucha por España​, comprised 12 pages and groups with around 378,000 followers.

Avaaz said it was unable to identify the individual/s behind that network.

While Facebook has not publicized the removals of these particular political disinformation networks, despite its now steady habit of issuing PR when it finds and removes “coordinated inauthentic behavior” (though, of course, there’s no way to be sure it’s disclosing everything it finds on its platform), test searches for the main pages identified by Avaaz returned either no results or what appear to be other unrelated Facebook pages using the same name.

Since the 2016 U.S. presidential election was (infamously) targeted by divisive Kremlin propaganda seeded and amplified via social media, Facebook has launched what it markets as “election security” initiatives in a handful of countries around the world — such as searchable ad archives and political ad authentication and/or disclosure requirements.

However, these efforts continue to face criticism for being patchy, piecemeal and, even in countries where they have been applied to its platform, weak and trivially easy to work around.

Its political ads transparency measures do not always apply to issue-based ads (and/or content), for instance, which punches a democracy-denting hole in the self-styled “guardrails” by allowing divisive propaganda to continue to flow.

In Spain, Facebook has not even launched a system of political ad transparency, let alone launched systems addressing issue-based political ads — despite the country’s looming general election on April 28; its third in four years. (Since 2015 elections in Spain have yielded heavily fragmented parliaments — making another imminent election not at all unlikely.)

In February, when we asked Facebook whether it would commit to launching ad transparency tools in Spain before the April 28 election, it offered no such commitment — saying instead that it sets up internal cross-functional teams for elections in every market to assess the biggest risks, and make contact with the relevant electoral commission and other key stakeholders.

Again, it’s not possible for outsiders to assess the efficacy of such internal efforts. But Avaaz’s findings suggest Facebook’s risk assessment of Spain’s general election has had a pretty hefty blind spot when it comes to proactively picking up malicious attempts to inflate far-right propaganda.

Yet, at the same time, a regional election in Andalusia late last year returned a shocking result and warning signs — with the tiny (and previously unelected) far-right party Vox gaining around 10 percent of the vote to take 12 seats.

Avaaz’s findings vis-à-vis the three bogus far-right networks suggest that as well as seeking to slur left-wing/liberal political views and parties, some of the inauthentic pages were involved in actively trying to amplify Vox — with one bogus page, Orgullo Nacional España, sharing a pro-Vox Facebook page 155 times in a three-month period.

Avaaz used the Facebook-owned social media monitoring tool Crowdtangle to get a read on how much impact the fake networks might have had.

It found that while the three inauthentic far-right Facebook networks produced just 3.7 percent of the posts in its Spanish elections data set, they garnered an impressive 12.6 percent of total engagement over the three-month period it pulled data on (between January 5 and April 8) — despite consisting of just 27 Facebook pages and groups out of a total of 910 in the full data set.

Or, to put it another way, a handful of bad actors managed to generate enough divisive politically charged noise that more than one in 10 of those engaging in Spanish election chatter on Facebook, per its data set, at very least took note.

It’s a finding which neatly illustrates that divisive content being more clickable is not at all a crazy idea — whatever the founder of Facebook once said.

We thank Avaaz for sharing their research for us to investigate. As we have said, we are focused on protecting the integrity of elections in Spain, the European Union, and around the world. We have removed a number of fake and duplicate accounts that were violating our authenticity policies, as well as one Page for name change violations. We aren’t removing accounts or Pages for coordinated inauthentic behavior. As in other cases, we removed these accounts based on their behavior, not the content they posted. Some additional Pages were also disabled because they were administered solely by fake accounts. We will take further action if we find additional violations.