Despite an ongoing tussle with the U.S. government, signs look positive for Huawei. The Chinese firm just released its end of year report for 2018 and profit is up 25 percent to 59.3 billion CNY, or $8.84 billion, thanks to its fast-growing smartphone and devices business.

Huawei isn’t a public company, but it does release financial reports that are audited by KPMG. The big takeaway from its latest financials is that it has become a hardware company — that’s to say that revenue from consumer devices overtook Huawei’s core telecom business, which involves selling networking gear to carriers.

Huawei said revenue from its consumer business rose by 45 percent to reach 349 billion CNY ($52 billion), with its carrier business dropping 1.3 percent to 294 billion CNY, or $43.8 billion. Enterprise services is the third revenue bucket, and that accounted for the remaining 74.4 billion CNY.

The company is, unsurprisingly, still reliant on China, which accounted for 52 percent of its revenue in 2018, although Huawei saw stronger growth from other global markets. Its business in the Americas, however, lags that of Europe and the Middle East and Asia Pacific in terms of revenue, and that isn’t likely to change soon. 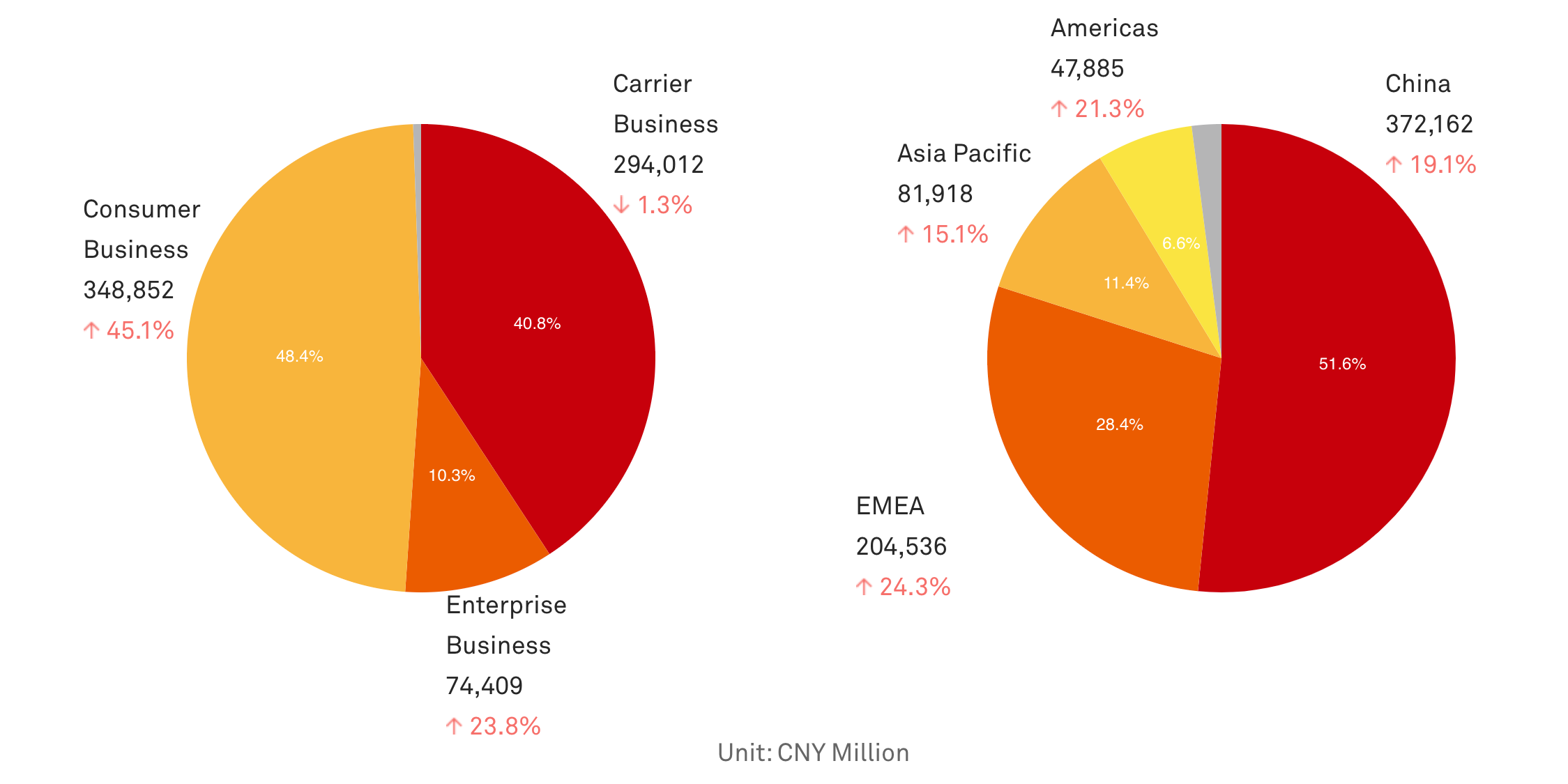 Huawei is certainly riding some momentum in the consumer space, having launched its latest P30 and P30 Pro smartphones last week — which come with some very impressive camera specs — and generally climbed the smartphone sales chart. Research firm IDC said Huawei grew its shipment volumes 33.6 percent thanks to its Honor brand. The firm ranked Huawei third with 16.1 percent market share in Q4 2018.

It’s on the carrier front where Huawei is being tested hardest.

The Chinese company has fought back against a ban on its equipment in the U.S. through a lawsuit arguing that federal agencies and contractors have violated due process and acted in a way that is unconstitutional. Still, the U.S. concern around national security has been fortified by a U.K. government report released this week, which claimed there are “significant technical issues” around adopting its telecom network kit.

The report, prepared for the National Security Advisor of the U.K. by the Huawei Cyber Security Evaluation Centre (HCSEC) Oversight Board, said it has “not yet seen anything to give it confidence in Huawei’s capacity to successfully complete the elements of its transformation programme that it has proposed as a means of addressing these underlying defects.”