Chinese startup ByteDance is finding itself surrounded by challengers as its empire of new media products, including global video app TikTok and Chinese news aggregator Jinri Toutiao, gather steam. Tencent tried to play catch-up with a handful of new short-video services, and a Facebook clone of TikTok was reportedly in the making.

Less-famous players also tried to take on ByteDance, but the costs of keeping up with the world’s most valuable startup are high. One company that’s made its mark is Qutoutiao, which is pronounced “chew-tow-ti-ow” and means “fun headlines” in Chinese.

Like ByteDance, the Shanghai-based company began as a news aggregator banking on personalized content often characterized by gossipy news and viral videos. By the time Qutoutiao debuted in 2016, Jinri Toutiao had more than 40 million daily users and was fast growing by feeding people what they wanted. Qutoutiao needed something more than just clickbaits and the solution was a costly scheme that rewards users with cash prizes for consuming more content and getting their friends to sign up. 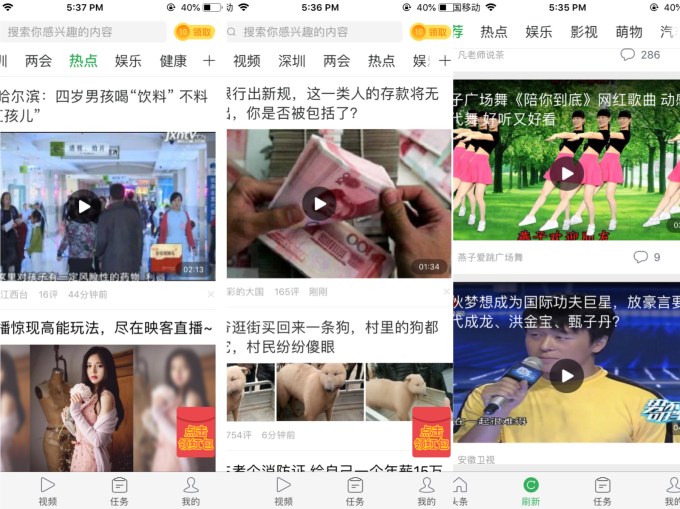 Screenshots of the Qutoutiao app, which is characterized by clickbait content akin to those on Jinri Toutiao

The startup was able to play the expensive game on account of sizable fundings. Before pushing ahead with an $84 million initial public offering in the U.S. last September, the firm had secured $242 million from backers, including Tencent. All that capital arrived within two years of its launch, and much of the money went to acquiring and retaining users.

In its fourth quarter, sales and marketing expenses soared 463 percent to almost $200 million. Revenues climbed 484 percent to $440 million in 2018, but the increase was tempered by the firm’s skyrocketing net loss, which widened to $283 million compared with $14.3 million just a year ago. 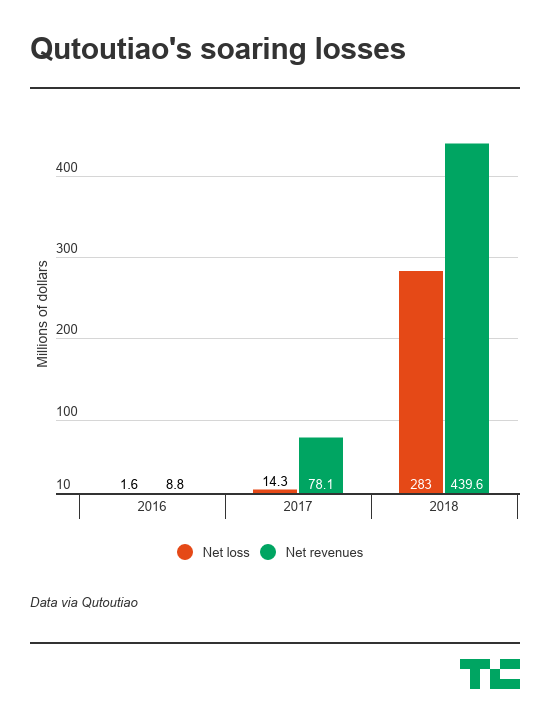 So far the spending spree appears to be paying off. In the three months ended December 31, monthly active users nearly tripled to 93.8 million, the company claims in its latest financial results. People spent an average of 63 minutes on the firm’s services each day over the quarter, doubling from about 30 minutes in the year-earlier period.

ByteDance’s Jinri Toutiao is still ahead by a large margin, with 2.4 billion MAUs in 2018, although that’s the result of six years in operation. TikTok, on the other hand, has collected more than 1 billion downloads worldwide. But ByteDance, too, is hemorrhaging money over its ambitious global vision. It lost a staggering $1.2 billion last year, The Information reported earlier, citing sources.

In the long run, Qutoutiao vows to improve its margins by “controlling user engagement expenses,” chief executive and founder Tan Siliang, who previously worked at Yahoo China and games publisher Shanda as a senior engineer, told analysts last week on a conference call. “As our user base continues to expand, our user acquisition expenses as a percentage of revenues will decline.”

The company is also aiming high. Last week, Tan said in an internal meeting that he believes “Qutoutiao will quickly rise to become a Top 10 internet company in China by 2019,” multiple Chinese outlets reported. To that end, the boss plans to double the company size by adding 2,000 staff this year, a move that contrasts with large-scale layoffs that have recently shaken up Chinese tech heavyweights like NetEase.

We’ve reached out to Qutoutiao for comments on the reports and will update the story when we hear back.

What’s also notable about Qutoutiao is its overwhelmingly small-town base, areas that China’s tech giants increasingly covet as markets in large urban centers reach saturation. The company says 70 percent of its users live in cities that are Tier 3 and below, far and remote from megacities Beijing, Shanghai and the like.

“[Small-town residents] used to rely predominantly on TV for news. Now with Qutoutiao, they could obtain much more timely, personalized and diverse news and information and, as a result, become frequent readers,” said Tan on the call. “The Qutoutiao app has total installations of about 300 million so far, which still has considerable further penetration potential given a 1 billion population that live in Tier 3 and below cities.”

Like ByteDance, Qutoutiao has branched out to other media forms. It also runs Midu, an e-book app that has collected 5 million users by providing a more thoughtful alternative to its clickbait-filled news app. More recently, the company trailed ByteDance’s to test out a short video service, which hasn’t officially launched but will make a big push in the second quarter. And the startup is ready to splurge if the app grows large enough to face off against TikTok.

“On the short video side, it is hard to give an estimated budget on the marketing side because it really depends on how popular or what kind of traction it receives with users,” said chief financial executive Wang Jingbo during last week’s conference call. “In case it has very strong traction with users such as TikTok, we will definitely be spending much more on the marketing side.”

China’s obsession with short videos has its internet giants worried