Fortnite Season 8 is almost here. There’s a lot we don’t know — most things, really — but the long wait will be over soon. If you can’t stand the anticipation or the requisite server downtime, we’re here to speculate so you’ll be mildly less bored. It worked for us.

If Fortnite’s snowy Season 7 felt like it was dragging on through winter, things look to be warming up and melting out. Epic’s hinting makes it pretty clear that Season 8 will be a maritime adventure of some kind, swapping abominable snowmen for… pirates. There have been other watery clues though in recent days those expanded on what we assumed to be a marine theme of some kind, suggesting the map may soon be crawling with sea-faring marauders.

If you combine the four pieces of an image teaser for the new season, you’ll clearly see a skull-looking situation with a hook hand on the right side and a… dragon-like creature (viper? scaly dude?) on the left. Below those images there’s a more clear dragon/monster creature and um, a freaked out looking banana. Because Fortnite.

'X' Marks The Spot
Treasure abound
Loot that has been lost
Can always be found.
4 days to Season 8. pic.twitter.com/1U8n7x4pQQ

Update: According to an Xbox leak, that right-side dragon creature actually could be a tiger mask that’s one of three featured Season 8 skins. Unfortunately, that tiger skin is so sweet I’ll probably have to play continuously until I get it, even though this game and I are on a break right now.

Xbox with the screw up this time! #fortnite #fortniteseason8 pic.twitter.com/QMNP3pgkcK

The red background and shape under the figures is distinctly lava-inspired, so we’re expecting a volcanic and or tectonic event to impact the map in some way that’s probably going to be centered around Wailing Woods, which has become brown, fissure-ridden and crispy in the last few days.

Then again, dragons can also make things pretty brown and crispy… as could a volcano full of dragons. And of course there’s the mystery of the dragon eggs below the castle made of ice. Will they turn out to be related to Season 8’s map transformation? Maybe, maybe not! 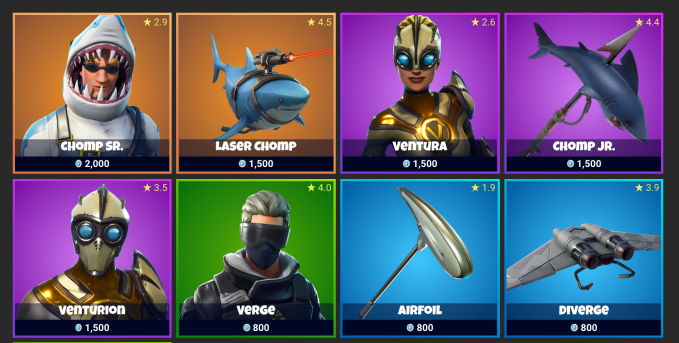 Beyond the thematic elements, Fortnite players should also expect some kind of new mass server-wide live event to whisk them into the fresh season. Some people think this will be a volcanic monster with billions of HP that everyone has to take down across servers, and given the scaled imagery and impending volcano situation, that’s as good a guess as any.

Beyond pirates, dragons, volcanoes and assorted oceanic stuff, we don’t really know what else to expect yet, but knowing Epic’s penchant for maximalism, it’ll probably be, well, epic.  One thing we do know: You should take one last joyride in the clouds because planes are set to be vaulted. Maybe players will be flying dragons this time tomorrow — that’s fine! Fly whatever you want, fly it in your banana suit, just please, please lock the plane noise in the vault for good.