Last year, Amazon introduced Alexa Blueprints, a way for an Alexa device owner to create their own customized voice skills and Alexa responses without needing to know how to code. These skills — like family trivia or tips for your babysitter — could then be published for personal use. Later, Amazon added the ability to share the skills with others by way of a link. Today, Amazon is taking things a step further — you’ll now be able to publish these skills publicly to the U.S. Alexa Skills Store.

The idea with blueprints is to offer Alexa device owners a simple, online tool for building voice skills using templates you customize and edit to your liking.

Originally designed for use in the home and among families, some of the first “blueprints” included those offering instructions to houseguests and sitters or games and trivia you could play with family and friends, among other things. Others let you create your own stories for Alexa to narrate, or helped you build your own flashcards, quizzes and other educational tools.

Amazon continued to expand the Blueprints service following its April 2018 launch. For example, last summer it rolled out more customizable templates for families and roommates, like the Chore Chart or Roommate templates, for instance.

As of yesterday, there were 50 voice blueprints available across a half dozen categories, including a newer set of special-occasion and greetings skills from Hallmark. 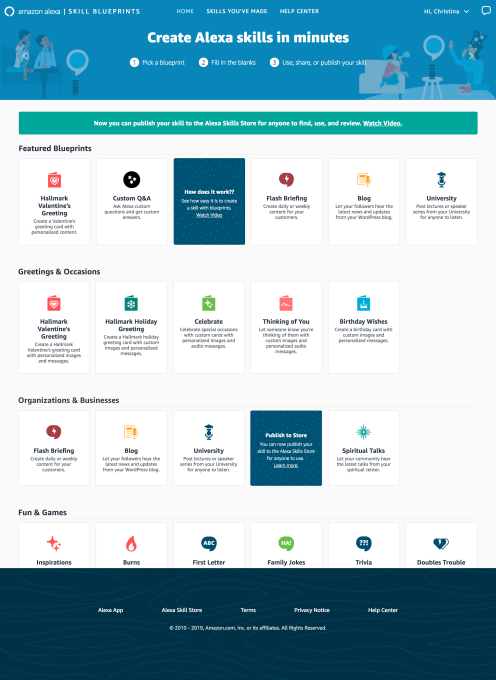 The most interesting is the Flash Briefing blueprint, which allows any content creator to publish their news and updates to the Alexa Skills Store in the U.S. Their audience can then opt to include the skill in their own daily briefing, alongside the news from larger organizations, like the BBC or NPR, for example.

Another allows bloggers using WordPress to deliver their blogs as audio, by way of Alexa. That’s similar to something Amazon previously offered via its Amazon Polly WordPress plugin, now called the Amazon AI Plugin. The new skill leverages that same plugin to turn the blog’s text to speech, which can then be published as an Alexa skill.

These two new blueprints allow smaller publishers or local news, local weather providers or local sports groups to reach Alexa users, but they may represent a new challenge for Amazon, too.

Because of their ease-of-use, these skills could be co-opted by extremists or conspiracy theorists who don’t have an official path to broadcast their “fake news” otherwise. Amazon will need to be careful in its vetting and approval process. 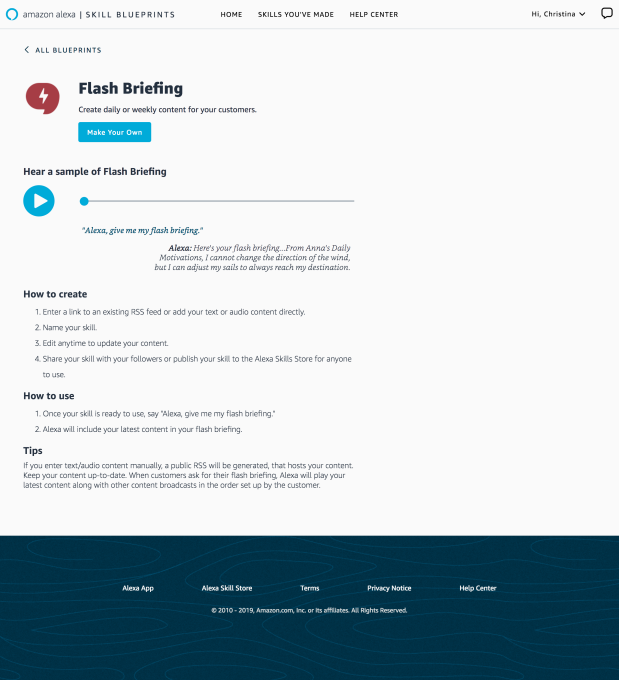 The other two new blueprints are aimed at organizations — specifically, universities and churches. The University and Spiritual Talks blueprints let anyone make their live and recorded audio content accessible on Alexa devices.

To create these skills, the organization only has to add their audio feed URL, then customize their welcome and exit messages.

In addition to the new blueprints, the current set of templates may be used by a wide range of businesses, brands and individuals, ranging from personal trainers who want to offer their clients personalized routines, to tutors who offer their students flashcards and facts, to authors who want to share their short stories with the world. 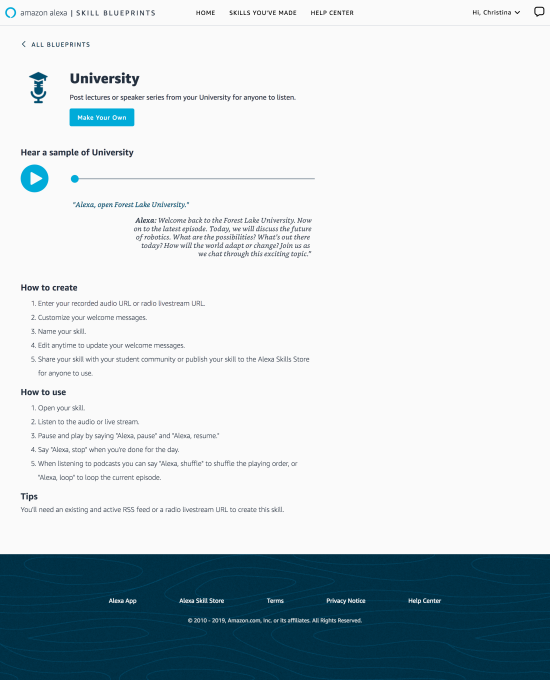 Amazon declined to say how many people have used Blueprints to date, but says it’s “excited” about the level of adoption. When asked if people could monetize their blueprints, a rep responded “that’s an interesting idea.” (Which is Amazon PR speak for “yes, but not now.”)

“We’re always thinking about ways to make the experience better for customers,” a company spokesperson said.

Allowing anyone to publish Blueprints to the Skills Store could allow it to quickly grow beyond the 80,000 voice apps it offers today. But it could also fill the store with lower-quality apps, as templated apps aren’t unique in their design, have simple flows and don’t use voice talent or sound effects as part of their experience.