Fertility services are raising venture cash left and right. Last week, it was Dadi, a sperm storage startup that nabbed a $2 million seed round. This week, it’s Extend Fertility, which helps women preserve their fertility through egg freezing.

Headquartered in New York, the business has secured a $15 million Series A investment from Regal Healthcare Capital Partners to expand its fertility services, which also include infertility treatments, such as in vitro and intrauterine insemination. The company has also appointed Anne Hogarty, the former chief business officer at Prelude Fertility and vice president of international business at BuzzFeed, to the role of chief executive officer. Hogarty replaces Extend Fertility co-founder Ilaina Edison, who had held the C-level title since the business launched in 2016. Edison will remain on the startup’s board of directors.

“A lot of amazing things have happened for women over the last century,” Hogarty told TechCrunch earlier this week. “Now, women are permitted and encouraged to seek higher education, pursue a career, follow their dreams and end up with a partner who’s the right partner, not just any partner. Doing all those things has pushed the window for when women want to start a family from their 20s to their 30s and unfortunately, one thing that has not changed in that time is the biological clock.”

“We are really purpose-built to be an egg-freezing-first company, where many legacy institutions that were providing infertility services have legacy costs that come with … inefficiencies bred over decades and outmoded technology in their labs that may not be the most efficient and effective,” she said. “We have a state of the art lab with the latest equipment.”

“It’s the classic innovator dilemma,” she added. “Infertility services are extraordinarily expensive and reproductive endocrinology is a new area of medicine. There are a lot of people and institutions that have been taking inordinate amounts of money for their infertility services so they weren’t looking to serve this population of women looking to preserve their fertility.”

One egg-freezing cycle with Extend costs women $5,500, and additional cycles come at a sticker price of $4,000. Each cycle includes a fertility assessment, private consultation, anesthesia and any monitoring a patient may need during their cycle. The costs don’t include medication, however. Extend can prescribe medications — which typically cost between $2,000 and $5,000 for fertility patients — but they still need to go through a third party to get their prescriptions filled and paid for. 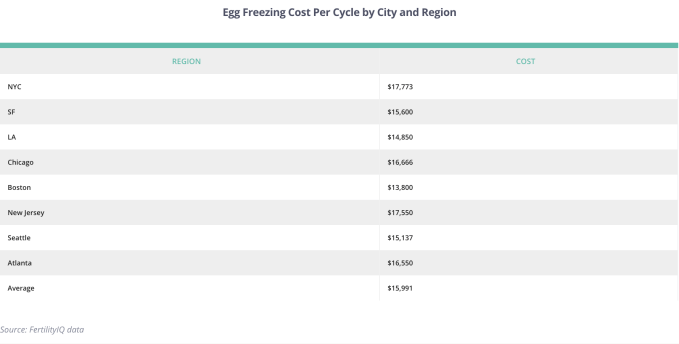 For reference, FertilityIQ, an online platform for researching fertility care providers and treatments, says the typical cost per cycle for egg freezing is more than $17,000 in New York City or $15,600 in San Francisco. Most egg-freezing services, including Extend, do not accept insurance, as most insurance providers don’t cover the steep costs of fertility or infertility treatments.

Some companies, however, are beginning to offer benefits that cover these costs. Facebook and Apple, for example, began subsidizing egg-freezing procedures for employees in 2014. Spotify and eBay, for their part, will pay for an unlimited number of IVF cycles.

Hogarty said Extend’s price point makes it one of the lowest-cost players in the market.

“We want as many women as possible to benefit from the advances from egg-freezing technology,” she said.

Extend Fertility, which has previously raised $10 million, plans to use the latest investment to open labs in new markets and expand its infertility services.