Amazon, Dish, Comcast and others are hoping to turn Super Bowl 2019 into a way to show off the potential for their voice technologies and TV integrations. The companies this week have been touting new features and a variety of voice commands that will allow viewers to get prepared for the big game, learn about players and teams, tune into NFL news and highlights, set their recordings and more.

In some cases, this may be as simple as asking your TV to tune to the Super Bowl, record the event or get more information about the game, as is the case with Dish. Customers can press the button on their Dish voice remote, then say to Alexa “Super Bowl” or “Super Bowl 53” to watch, find information or record the game, the company says.

Comcast and Amazon are taking things further, however.

Comcast’s Xfinity X1 customers can now use their voice remote to get the latest stats, get pre-game news and post-game highlights or even turn on an app that tracks real-time stats on the screen during the big game.

For example, X1 customers can say “Tom Brady vs. Jared Goff,” “The Patriots vs. the Rams,” “Show me Julian Edelman,” “Show me Rams leaders” and other sorts of commands to get stats on teams or to learn about the players. They also can say “Super Bowl” or “NFL” to be taken to news and highlights, or say “X1 Sports app” to launch the stat-tracking feature on their TV screen. 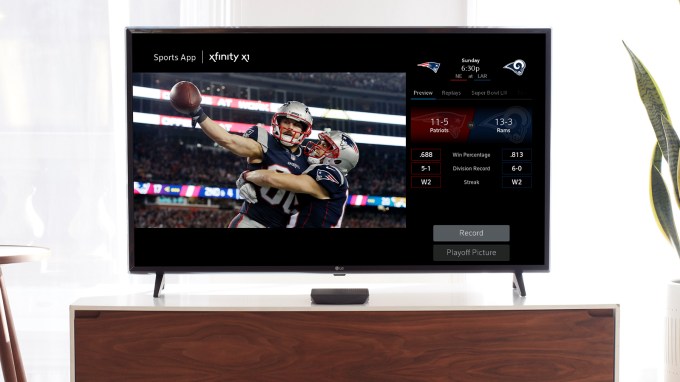 Smart home users with Xfinity Home can even turn their lighting to their favorite team’s colors by saying “Xfinity Home, go Patriots!” or “go Rams!,” as desired.

Alexa’s Super Bowl feature set is more robust, offering the ability to ask for trivia and quizzes, background on the players and teams, stats, jokes and burns, track the odds, get historical data and more.

These sorts of questions can range from the basic — like, “where is the Super Bowl this year?” — to the more complex, like “what is the Patriots yards per carry this season?” or “how many times has Tom Brady been to the Super Bowl?”

You can also ask Alexa for a Super Bowl quiz, fact or past game recaps, in addition to more informational questions. Alexa can give you football jokes and “burns,” too.

What was surprising was that some of the stat-related questions Alexa could answer herself weren’t answered on Google Home, when asked the same way — for example, the above yards per carry question, and number of Super Bowls that Tom Brady has been to.

Both Alexa and Google Assistant will give you their own opinion on who they want to win, however. Google says it’s cheering for the underdog, the Rams. Alexa says as much as she wants to cheer for the Rams, she thinks the Patriots will win.