Brud, the company behind the virtual celebrity Lil Miquela, is now worth at least $125 million thanks to a new round of financing the company is currently closing. Meanwhile, new venture-backed companies like the superstealthy Shadows, SuperPlastic and Toonstar are all developing virtual characters that will launch via social media channels like Snap and Instagram, or on their own platforms.

It’s all an effort to test whether audiences are ready to embrace even more virtual avatars — including ones that don’t try to straddle the uncanny valley quite as blatantly as Miquela and her crew.

The investors backing these companies say it’s the rise of a new kind of studio system — one that’s independent of the personalities and scandals that have defined a generation of Vine, YouTube and Instagram stars — and it’s attracting serious venture dollars.

Los Angeles-based Brud is by far the most established of this new breed in the U.S. (at least in terms of the amount of money it has raised). Last year the company scored at least $6 million from investors, including Sequoia Capital, BoxGroup and other, undisclosed, investors.

And the company has done it again, and is in the process of closing on somewhere between $20 million and $30 million at a pre-money valuation of at least $125 million led by Spark Capital, according to people with knowledge of the round. Miquela “herself” teased that “she” had something to “share” with her roughly 1.5 million followers. Brud declined to comment.

If Miquela is arguably the most successful U.S. version of this new breed of entertainer, the collective behind the account is far from the only one.

Experiments in avastardom have been percolating in popular culture since at least the rise of the Gorillaz — the Damon Albarn assembled musical supergroup that released their first EP “Tomorrow Comes Today” in late 2000. Or, depending on your definition, perhaps as early as Space Ghost Coast to Coast, the mid-1990s Cartoon Network series featuring an animated superhero interviewing real celebrities.

And that success spawned imitators like Hatsune Miku, who’ve captured the imagination and hearts of audiences globally. In November, a Japanese fan named Akihiko Kondo spent $18,000 to wed the avatar. And he’s not alone. Gatebox, the company that manufactures hardware to display holograms of various anime characters in homes, has issued at least 3,700 marriage licenses to fans like Kondo.

At Betaworks, the firm is exploring the popularity of these virtual characters — and the role that artificial intelligence and new content creation technologies will play in reshaping entertainment and social media platforms. The company’s Synthetic Camp, which launches in mid-February, is around what Rojas calls “synthetic reality,” including the rise of avatar-driven media like Miquela.

“We’re looking more broadly at the issues around manipulated or faked content and how do you address that,” says Rojas. “Algorithmically generated content and how things like generative adversarial networks are being used to create and synthesize new photo and video content.”

For Rojas, the development of powerful new tools that enable the creation of new characters in minutes that, in the past, would have taken humans hundreds of thousands of hours, can unlock all sorts of possibilities for entertainment.

“The celebrity part comes into play where we’re now at a point where you can create these photorealistic avatars and put them into videos and have them wearing clothes without having to spend millions of dollars on CGI,” he says.

Betaworks is betting on the content studio aspect through companies like SuperPlastic, a new startup launched by Paul Budnitz, the founder of the alternative social network ello and Budnitz Bicycles. Budnitz is perhaps best known for Kidrobot, a manufacturer of branded collectibles and toys for adults and kids everywhere. But the company also believes there are opportunities in backing the content creation toolkits that can power this new kind of media star, like its investment in the media creation tool, Facemoji.

“There’s no reason why you won’t see it across the board. Our appetite for fresh content and this stuff is kind of limitless,” says Rojas. “And I don’t see it as zero sum. YouTube didn’t kill television, it just became Netflix… Things can move in two different directions at the same time. More high brow and more complex and higher level and also more democratized and lowbrow and dumb. There’ll be avatar tools and apps and games and then we’ll see stuff that’s top of the pyramid stuff like Lil Miquela and Shudu.”

At Toonstar, co-founders John Attanasio and Luisa Huang went from developing a platform to developing a studio. The two met at the Digital Media Group within Warner Brothers and were tasked with trying to experiment with technologies at the intersection of media generation and distribution.

“Daily, snackable and interactive are the three things that you need to be successful in the world,” says Attanasio. “We saw the impact that the rise of mobile was having on linear. We sat through a lot of meetings where you looked at audience trends and you saw that going in the wrong direction in the wrong color.”

So the two founders began contemplating what a new, low-cost, high-touch media network might look like. “We looked at mobile and we saw the massive animation gap. Animation takes a long time and it’s expensive, the average season can cost $3 million to $5 million and bringing a new series to life can take three to four years.”

For Attanasio and Huang, those timelines were too slow to take advantage of the mobile content revolution. So the two built a platform that initially focused on letting user-generated content flourish — a kind of YouTube for animated, avatar-driven storytelling that could be distributed on any social media platform or on Toonstar’s own site and app.

Since that launch, the company has refined its business model to become more of a traditional animation studio. “We do daily pop culture cartoons… and partner with creators and influencers,” says Attanasio. “Our whole thing is driven by proprietary tech that allows us to do things really fast and at low cost… 50 times faster and 90 percent cheaper than typical animation.”

Attanasio also realized the importance of creative talent. “We had no shortage of content, but it was shitty content,” Attanasio says. “That’s when you realize… what we’re doing… there’s three ingredients… One is tech, one is process and the third is creative… if you have tech and process and you take away creative what you have is an ocean of shit.”

“We launched a channel called Poppy.tv. It was a blue chicken [and] she became musically famous,” Attanasio said. “Within three months Poppy had 300,000 followers and had an avid fan base for Poppy and her cast of characters.”

The content was episodic and ranged from 15 seconds to 30 seconds — and it was based on cartoon music videos. “That validated the thesis of can you create a cartoon influencer and can you have a broad audience be super engaged?… and the answer was ‘Yes,'” said Attanasio.

Then, taking a page from the early Cartoon Network playbook, Attanasio and Huang made the show interactive in a callback to the “Space Ghost” phenomenon. “We started doing cartoon live streams and the founders of Musical.ly asked us to do a weekly show that they would feature,” Attanasio says. “It was Poppy the Blue Chicken and we would broadcast for an hour every week. Famous musers on Musical.ly come in with a FaceTime… And there were games and all of it was live, in real time.”

It’s hard to overstate the importance of working with virtual characters, according to Attanasio. “We understand how much money you can make from the IP. When we’re working with creators or influencers they understand that you have this shelf life as an influencer, but as IP, that can go on in perpetuity. There is something to be said about building a character. We’re all children of Saturday morning cartoons.”

And Toonstar is building an audience. Its show, the Danogs, has 4.5 million weekly viewers, and the company recently launched Black Santa — a show developed in partnership with the former NBA All-Star and tech investor Baron Davis. The NBA star and studio analyst also committed capital to Toonstar’s recent seed funding, a round led by Founders Fund partner Cyan Banister. In all, Toonstar said it has about 45 million weekly viewers for all of its shows. 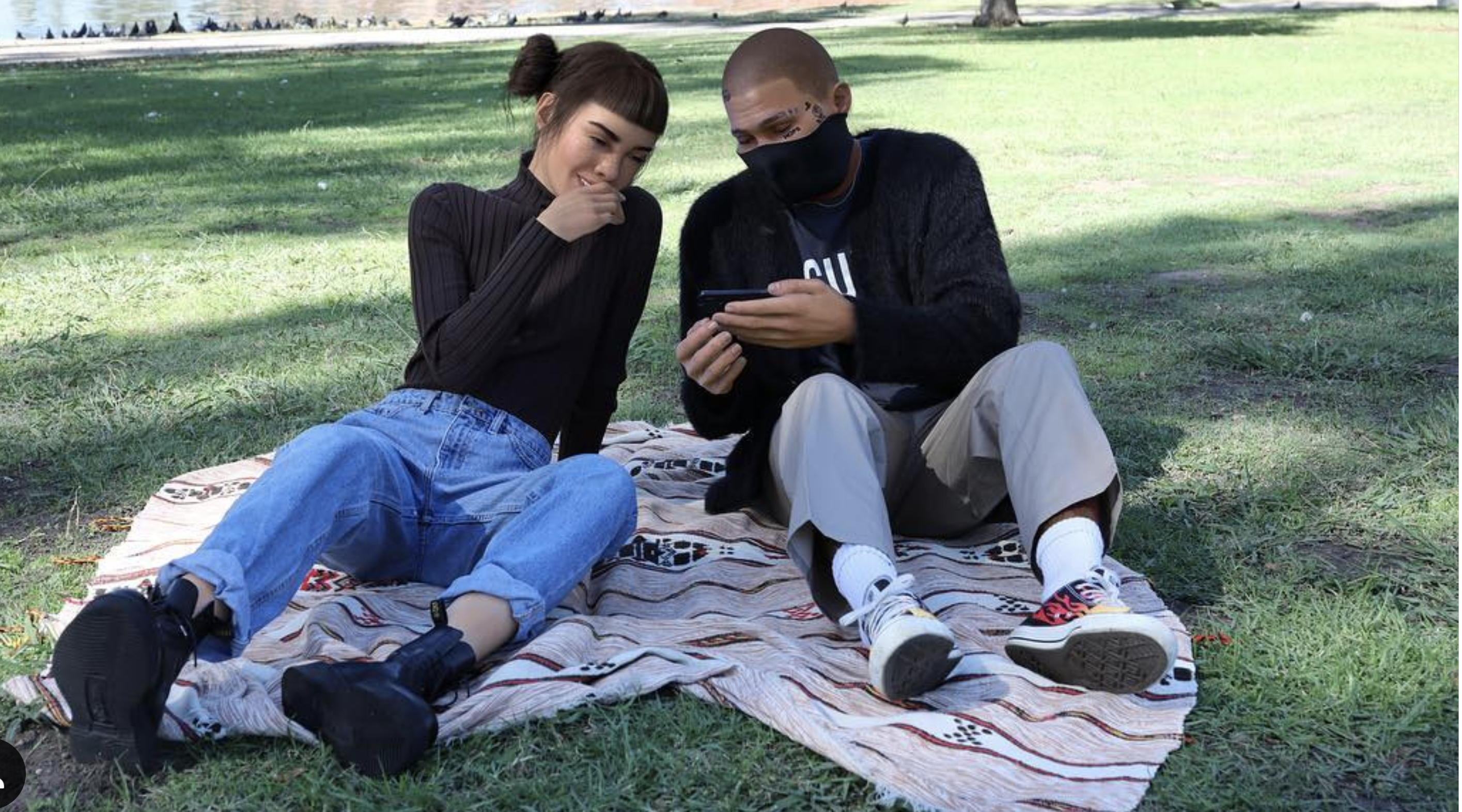 Those kinds of numbers are music to the ears, of Dylan Flinn, a former agent at the Los Angeles powerhouse Creative Artists Agency, who left to start his own company.

Flinn has partnered with the producers of BoJack Horseman on a new venture called Shadows, which has already launched two virtual avatars into the wild.

Flinn got exposure to the virtual media world while at Rothenberg Ventures, the now defunct fund that invested in virtual reality and augmented reality. “I still had that lens of looking at innovation and virtual worlds and I’ve always been fascinated by what social media is doing.”

For Flinn, the virtual element of what’s being created is vitally important to the success of these ventures. “We’re not trying to create humans,” he says. “We look up to the Mickey Mouses and Looney Tunes and the Bugs Bunnies of the world. When I look at these 3D, [computer generated] human-based characters, it’s so close to the uncanny valley. We want to develop characters and we want to tell fictional stories rooted in reality.”

Like Attanasio at Toonstar, Flinn sees the speed at which digital content can be created and brought to market as a critical component of its success. “When I was at CAA you see how much money is wasted on development every year. This was an approach which was like, ‘What if you can develop in public and the best content can win?'” Flinn says.

Shadows already has two virtual avatars out in the wild, but he declined to identify which ones they were. Ultimately, he said, the goal is to have 20 characters a year, because once a couple of characters come to market and get traction with an audience, new characters can be introduced to old ones and the universe becomes a discovery engine of its own. That’s a strategy that Miquela and her crew are also employing, with varying degrees of success.

Ultimately, these types of entertainments aren’t going to go away — at least according to the investors and entrepreneurs who are creating the companies that are building them.

“People are totally fine with things that are artificial,” says Rojas. “People totally connect with Mario from Super Mario Bros. We always tell stories and have characters in whatever medium are available to us [like] Instagram and Snapchat and YouTube and Twitter. Thirty to 40 years ago it was television and radio and movies. People are going to express themselves and avatars end up being a form expression.”