This Saturday, several issues related to LGBTQ equality, including marriage, are up for referendum in Taiwan’s mid-term elections. A little more than a year after the country’s top court ruled in favor of same-sex marriage, the LGBTQ community is once again fighting for their rights due to efforts by anti-gay groups. The battle has reached social media platforms including YouTube, where a group called 3 Yes is running an ad, often appearing before popular children’s videos, that claims teaching about LGBTQ issues in schools will confuse young children about their gender identity.

3 Yes’ name refers to three referendum items (proposals 10, 11, and 12) that anti-gay groups want voters to approve during Saturday’s election. The questions ask voters “Do you agree that marriage should be restricted to being between one man and one woman under the Civil Code?”; “Do you agree that the Ministry of Education and schools at the elementary and junior high level should not teach about homosexuality as detailed in the Gender Equity Education Act?” [passed in 2004 to promote gender equality and prevent discrimination]; and “Do you agree to unions outside of the ones defined as marriage by the Civil Code to protect the right of same-sex couples to live together permanently?”

In an attempt to counteract those proposals, LGBTQ advocacy groups introduced two additional referendums (14 and 15) that ask “Do you agree that the rights of same-sex couples to get married should be guaranteed by the Civil Code’s marriage regulations?” and “Do you agree that gender equity education as defined under the Gender Equity Education Act should be taught at all stages of the national curriculum and include education about emotions, sex, and homosexuality?”

Even though Taiwan’s Constitutional Court ruled in favor of same-sex marriage in 2017, the fact that the issue and others made it to referendum this year underscores the power of anti-gay groups led by religious conservatives, including the Bread of Life Christian Church, the Happiness of the Next Generation Alliance, and the Alliance of Taiwan Religious Groups for the Protection of the Family. In addition to YouTube videos, groups such as these have also spread homophobic propaganda and misinformation through demonstrations, flyers, banners, and other online platforms including YouTube, Facebook, and Line, one of the most popular messaging apps in Taiwan. 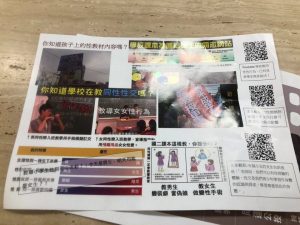 An example of a flyer denouncing education about LGBTQ issues.

3 Yes’ YouTube channel has three videos. Two appear to show same-sex couples before they suddenly veer into messaging that marriage is between one man and one woman. The third, which was uploaded to 3 Yes’ channel a week ago and is currently running as an ad, is even more pernicious.

It opens at a school, with young students looking at a textbook. A girl says “He must be 80% like a girl,” referring to a boy, who gets upset and runs home. Upset, he asks his parents “My classmates are laughing at me for being 80% like a girl. Do you think I’m a boy or girl?” as they look in shock at the textbook. His older sister then turns to their father and says “Dad, you must be 100% girl” as both parents gape at her in horror. The ad cuts to the slogan “Support ACCURATE, AGE-APPROPRIATE gender equity education.”

(It is worth pointing out, considering the video’s misogyny, that Taiwan’s government had to issue guidelines against sex-selective abortions because the preference for boys has skewed the country’s sex ratio).

I am the parent of a toddler and began noticing the ad popping up this week when we watched popular kids’ channels on YouTube. The example embedded was taken before a video by Super Simple Songs, a channel with over 12 million subscribers that features nursery rhymes and other content for very young kids. While I’ve seen it at other times, the frequency it appears in the afternoon and early evening suggests that 3 Yes scheduled their ad to run during those time slots, when many kids are home from school, in front of content targeted to them.

(It is important to note that while YouTube content creators can filter out certain advertisers from running before their videos, many may be unaware of ads like the one by 3 Yes because they aren’t located in the same market. Super Simple Songs, 3 Yes, and Google have all been contacted for comment. When reached through their Facebook page, someone from 3 Yes said they don’t run TV ads. I clarified that I mean YouTube ads and am awaiting a response.)

The ad is especially concerning because it helps the spread of misinformation about sexuality and gender by anti-gay groups in Taiwan. Debates are required for referendums and during one of them, the executive director of the National Alliance of Presidents of Parents Associations, Yang Chun-tzu, stated that children should not learn about homosexual issues during elementary and junior high school because it could influence their sexual orientation. That notion has been debunked by growing mounds of evidence that sexual orientation is mainly determined by genetic factors.

Indeed, statements like the those made by Yang and 3 Yes support the case for more education about LGBTQ issues in Taiwan’s schools, not less. 3 Yes’ video also appears to contravene Google’s new initiative against misinformation, though it’s less clear if it violates its policy against hate speech.

But even if it doesn’t incite physical violence, it promotes harmful stereotypes about LGBTQ people and is a sad echo of other instances when anti-gay ads have run on YouTube, sometimes appearing before videos by LGBTQ YouTubers. It is also a reminder that YouTube’s attempts to make its platform safer for children, including “safeguarding the emotional and physical well-being of minors,” is difficult to enforce.

Imagine being a LGBTQ child in Taiwan and seeing an ad like that pop up while you are watching your favorite channels, at a time when adults are about to vote on the basic rights of LGBTQ people, and you are already confronted every day by banners and flyers that declare you are in a lesser category of human. This is a stark reminder that social media platforms and content creators must pay more attention in different markets to the kind of ads and content that are allowed to be targeted to kids, especially during elections and other politically-charged times.