Lidar technology developer AEye will scale its operations globally through manufacturing partnerships after raising a $40 million Series B. The round was led by Taiwania Capital, the investment firm created and backed by Taiwan’s National Development Council, and includes returning investors Kleiner Perkins, Intel Capital, Airbus Ventures and Tychee Partners.

This brings the California-based startup’s total funding so far to about $61 million. In the announcement, founder and CEO Luis Dussan said Taiwania’s investment is a strategic one and will give AEye more access to manufacturing, logistics and tech resources in Asia. AEye also plans to launch a new product at CES in January.

In a press statement, Taiwania Capital’s managing partner Huang Lee said “We see AEye as the foremost innovator in this space, whose systems deliver highly precise, actionable information at speeds and distances never seen in commercially available lidar sensors. We look forward to working closely with AEye’s team to explore and pursue growth opportunities in this burgeoning space.” 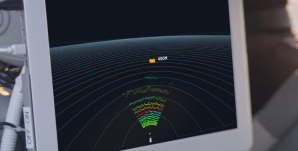 Along with its funding, AEye also claimed it has set a new record for the distance from which a lidar system is able to detect and track a moving object. (Lidar stands for “light detection and ranging” and is used to create “point clouds,” or three-dimensional maps made of coordinates from laser pulses. Lidar has many applications, but a lot of attention is being paid to how it is used by autonomous vehicles and drones).

In tests monitored and validated by VSI Labs, a research company that focuses on autonomous-vehicle technology, AEye said that its iDAR sensor, which was launched earlier this year and combines a solid-state lidar and high-resolution camera in one device, was able to detect and track a moving truck from one kilometer away. AEye claims that this is four to five times the distance other current lidar systems can detect and is possible because iDAR is better able to mimic the way human brains process visual information. In a press statement, AEye chief of staff Blair LaCorte said the company believes iDAR can potentially track moving objects, including trucks and drones, from five kilometers to 10 kilometers away.