It’s not been a pretty year for anyone who owns Bitcoin, but the last 24 hours has been a period to forget as the cryptocurrency dropped below $100 billion in market cap for the first time in more than a year.

You have to go back to the end of October — the 29th to be precise — for the last time that the total circulation of Bitcoin in the market dropped below $100 billion.

It looks like this will be the first 24-hour period to hold that rate — so much for the relative price stability that many in the industry had complained about, be careful what you wish for!

The dip follows a decline that took Bitcoin’s price below the mark $6,000 for the first time this year — it has since plunged below $5,600. That, in turn, caused havoc in the altcoin market with valuations plummeting double-digit percentages nearly across nearly all of the top 100 valued tokens. Of the top ten, Cardano is down 14 percent, Litecoin 13 percent and Ethereum and EOS 12 percent. The changing prices also saw Ripple’s XRP token rise above Ethereum to become the second most valued cryptocurrency behind only Bitcoin.

As ever, the source of the malaise is tough to diagnose.

Bitcoin Cash, which is about to undergo a hard fork, looks to be the most likely cause.

Bitcoin Cash is about to undergo a hard fork that’ll result in two different chains — Bitcoin Cash ABC (BCHABC) and Bitcoin Cash SV (BCHSV) — and that has caused a great deal of uncertainty in the market.

You could argue that this situation caused the value of Bitcoin to decrease, that often draws owners of altcoins who trade their tokens for the cheaper Bitcoin. That movement can negatively impact both Bitcoin and the altcoins that are traded.

Of course, there are a wide number of theories as to what is happening out there. One thing that is for sure is that the markets are bleeding pretty hard today. 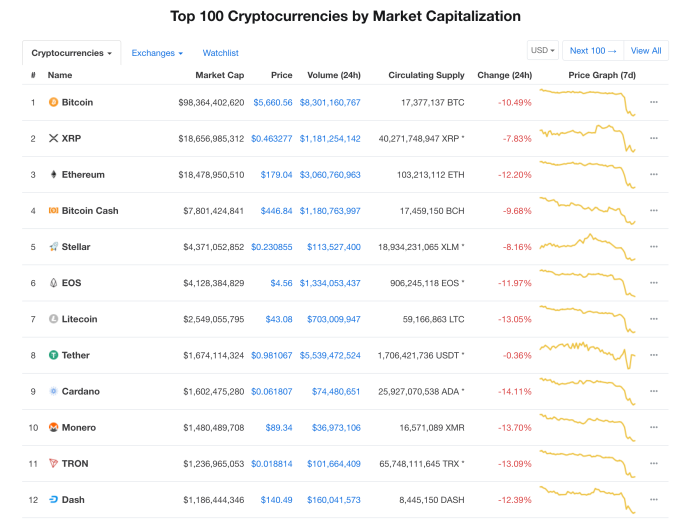