Crunchbase News recently profiled a selection of U.S. companies’ largest VC raised in 2018, and no surprise here: the 10 largest rounds all topped out well north of $100 million.

A major driver of global venture dollar growth is the relatively recent phenomenon of companies raising $100 million or more in a single venture round. We’ve called these nine and 10-figure deals, which shine brightly in the media and are hefty enough to bend the curve of VC fund sizes upwards, “supergiants” after their stellar counterparts.

And like stars, venture-backed companies tend to originate and co-exist in clusters, while the physical space between these groups is largely empty.

We noticed that many of the companies behind these supergiant rounds are headquartered in just a few metro areas around the United States. In this case, it’s mostly just the SF Bay Area, plus others scattered between Boston, Los Angeles, San Diego and one (Magic Leap) in the unfortunately named Plantation, Florida.

The San Francisco Bay Area is perhaps one of the best-known tech and startup hubs in the world. Places like Boston, NYC and Los Angeles, among others, are perhaps just as well-known. But how do these cities stack up as clusters for companies raising supergiant rounds?

That question got us wondering how these locales rank against other major metropolitan areas throughout the world. In the chart below, we’ve plotted the count of supergiant venture rounds1 topping out at $100 million or more through November 5. These numbers are based off of reported data in Crunchbase, exclude private equity rounds and do not account for deals that may have already been closed but haven’t been publicly announced yet. 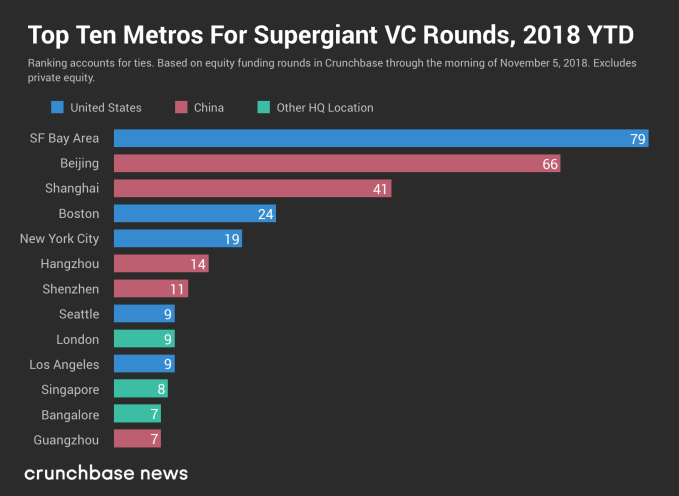