Uber may be global but it is very much the alternative in some parts of the world. One such place is Bangladesh — the South Asian country that’s home to 160 million people — where local rival Pathao is backed by Go-Jek and recently raised $10 million. Now Pathao’s closest rival, Shohoz, has also pulled in investment after it closed a $15 million funding round.

Shohoz — which means ‘easy’ in Bengali — started in 2014 offering online bus ticket sales before expanding into other tickets like ferries. The startup moved into on-demand services in January when it added motorbikes and then it recently introduced private cars. CEO Maliha Quadir told TechCrunch that it is now registering one million completed rides per month as it bids to “simplify” life in capital city Dhaka, which houses over 18 million people and offers limited transport options.

“Bus tickets will remain an important part of our business, [there’s] lots of synergy with ride-sharing,” she explained in an interview. “Dhaka has a super dense population with bad infrastructure, if anything there’s a better case for ride-sharing than Indonesia… there’s no subway and transport is a horrid nightmare.” 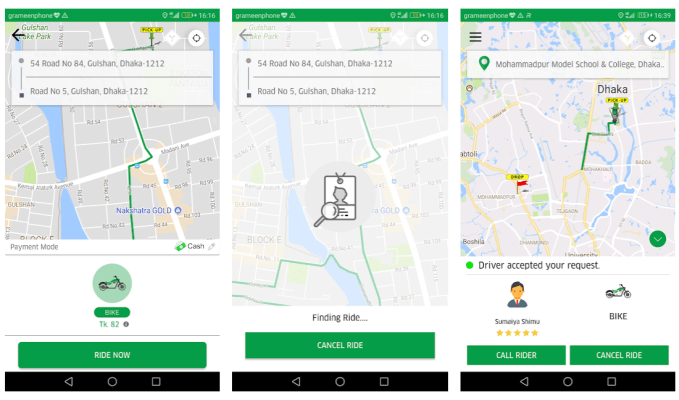 Quadir, who graduated from Havard and spent time working in finance in the U.S. and Singapore, told TechCrunch that Shohoz plans to double down on its ride-sharing business with the new round. In particular, the plan is to expand beyond Dhaka soon.

Then it is also eyeing up services that’ll take it beyond point-to-point transportation and into ‘super app’ territory in the style of Go-Jek and Grab, the two Southeast Asia-based unicorns. For Shohoz, that’ll initially include food delivery, but there are also plans to add on-demand services — Go-Jek, for example, offers services like groceries, hairdressers or massages on demand. Ultimately, Quadir plans to add financial services, too, which could mean payments and financial products in the future.

While the super apps of Southeast Asia have all expanded beyond their home markets, Shohoz isn’t looking to go international quite yet.

“It’s in my mind but there’s so much to do in Bangladesh,” Quadir explained. “In Bangladesh, you can really make an impact — it’s a green field.”

As for Uber, Quadir acknowledged that the U.S. firm has done a good job on private car vehicles but she said its Uber Moto service is dwarfed by local alternatives. It appears that Shohoz’s bet on becoming a super app is aimed at emulating the likes of Didi Chuxing in China and Grab in Southeast Asia that ultimately beat Uber using a localized strategy that went well beyond rides. Given that Pathao is pursuing the same strategy, three might well be a crowd in Bangladesh and that could spell difficulty for Uber.