The U.S. IPO window may be wide open for Chinese tech firms, but electric vehicle maker Nio has conservatively cut the target for its NYSE listing to $1.5 billion after it released a price range for its shares.

The company plans to sell 184 million shares between $6.25-$8.25. That range would yield a total raise of $1.518 billion, which is down from the initial target of $1.8 billion from the firm’s first filing in August. The range is, of course, subject to change and it doesn’t include income from the green shoe option — which allows underwriters to take an additional allocation of shares — but nevertheless, it is a notable development.

Nio also revealed in its newest filing that its existing investors have committed to investing $250 million into the IPO which, at the middle of the range, would account for 22 percent of the allocation.

There are plenty of possible explanation as to why Nio has cut its overall fundraise estimate.

The most fundamental may be around sales. The company has only just begun to generate revenue. It opened sales for its ES8 vehicle last year but it only began shipping in June. So, thus far, it has fulfilled just 481 orders but it does claims that there are 17,000 customers who reserved a model and are waiting in the wings to purchase it.

That’s meant that the company has recorded hefty losses — a negative $759 million in 2017 and minus $503 million this year to date — as it went pedal to the metal on R&D and preparation. Just a month of revenue makes it hard to gauge that potential, even though Nio has plans to scale up and open its own manufacturing plants. 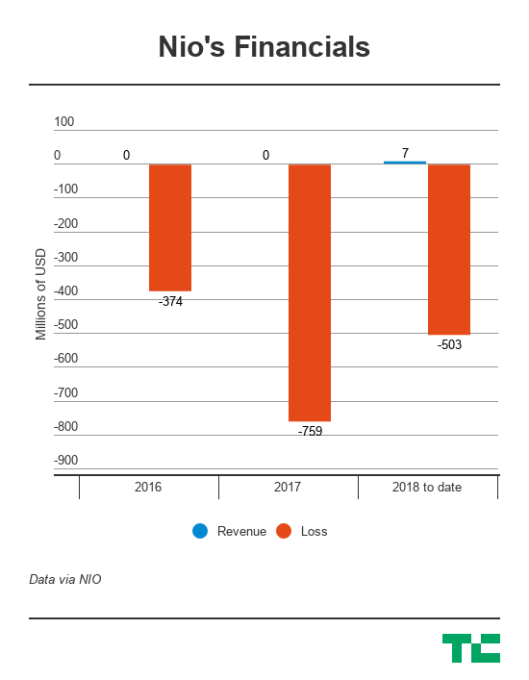 Also, however, it may also be related to general concerns around China.

Nio is an international firm which develops technology in Silicon Valley and has design teams in Germany and the UK, but China is the only market it is focused on for sales. That makes a lot of sense since China is the world’s largest market for consumer EV sales, but there is, of course, a disconnect between the country and U.S. IPO investors. While Chinese firms have performed well on U.S. public markets — Alibaba holds the record for the world’s largest IPO and the window is very much open for Chinese tech companies right now — but EVs still remain a new concept, even in the world of technology.

Then there’s also the ongoing issue of politics. In particular, there’s President’s Trump continued trade war with China — the U.S. doubled down with a range of new tariffs last week — and some concern around Beijing’s interference with China’s top technology companies.

Tencent, the $500 billion giant, had a rare earnings miss last quarter on account of government interference in some of its core business, while arch-rival Alibaba has taken criticism about the way it dressed up its latest financials, which were good on paper. Indeed, both companies — which are China’s top tech firms — have seen their share prices drop: Alibaba’s current price is down by 15 percent from what it was on January 1, while Tencent is down by 25 percent.

All those concerns gathered together have likely caused Nio to price more conservatively, but we’ll have to wait for the list price to know for sure. Still, we’re looking at a billion-dollar IPO for the company which is seen by many as the closest competitor to Tesla — even if it currently has no U.S. sale plans.

You can read more about the Nio business from our original story on the IPO filing below.