It isn’t the most usual situation for a founder to write a review trashing a competitor’s new product, but Oculus co-founder Palmer Luckey has never been the most conventional entrepreneur.

Yesterday, Luckey published a review of Magic Leap’s developer kit on his personal blog titled “Magic Leap is a Tragic Heap.” In it, he offered a few compliments, but he spent the majority of his words highlighting shortcomings of the new device while seeking to remind everyone of all the shit that Magic Leap execs talked about existing AR tech and how they nevertheless ended up running with a device that, in his opinion, made only minor improvements over the three-year-old HoloLens.

My review of Magic Leap ML1. It focuses on a few points that have not been broadly reported or analyzed by the media.https://t.co/ciBwUigIoQ

There are a number of digs he makes in his review. Perhaps most insightfully he takes on the tracking technologies used for the headset and controller, noting areas where they are actually steps back in user experience. The Magic Leap One’s controller uses magnetic tracking, a system far different and generally more complex than the optical tracking systems that almost all VR companies, including Oculus, utilize. Once you read the paragraph where he trashes the lack of a clickable trackpad, it becomes clear that this is probably more than a little personal for Luckey. 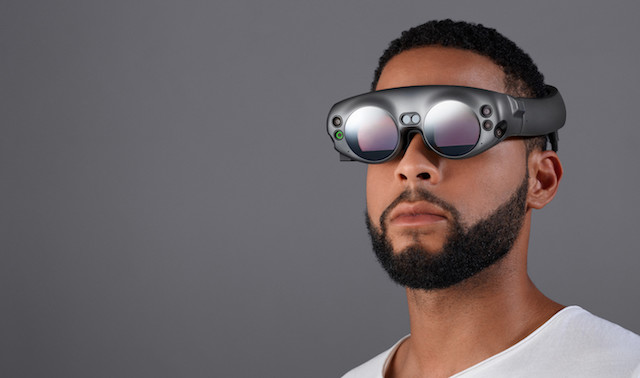 At this point, Luckey has moved beyond his VR days in a professional sense (for the most part). His new company, Anduril Industries, is focused on creating border security technologies; nevertheless, he has remained a very vocal personality in the VR space with a reputation of a hardcore hobbyist.

A lot of this beef seems easy to identify. Magic Leap CEO Rony Abovitz has spent the last several years raising a lot of money while developing technology in secret and trash-talking existing tech in public. In Luckey’s view this hasn’t been great for investment in the AR/VR space, where investors have had unrealistic expectations put in front of them that may have reduced interest in other existing companies that were taking a more conservative approach to hyping themselves.

The most brutal takes are reserved for the ML1’s display tech, which Luckey points out really isn’t any different from what other companies have been looking at. While the Magic Leap team invented terminology to describe what they have built, Luckey points out that they didn’t solve what they claimed that they would:

They call it the “Lightwear”. This is the part that has gotten the most hype over the years, with endless talk of “Photonic Lightfield Chips”, “Fiber Scanning Laser Displays”, “projecting a digital light field into the user’s eye”, and the holy-grail promise of solving vergence-accommodation conflict, an issue that has plagued HMDs for decades – in other words, ensuring that the focus of your eyes always matches their convergence, something that Magic Leap has touted as critical in avoiding “permanent neurologic deficits” and brain damage.  It is even more important for AR than VR, since you have to blend digital elements with real-world elements that are consistently correct.

TL;DR: The supposed “Photonic Lightfield Chips” are just waveguides paired with reflective sequential-color LCOS displays and LED illumination, the same technology everyone else has been using for years, including Microsoft in their last-gen HoloLens.  The ML1 is a not a “lightfield projector” or display by any broadly accepted definition, and as a Bi-Focal Display, only solves vergence-accommodation conflict in contrived demos that put all UI and environmental elements at one of two focus planes.  Mismatch occurs at all other depths.  In much the same way, a broken clock displays the correct time twice a day.

He also takes on the headset’s small field-of-view, something that honestly feels like a bit of a cheap shot when he compares it to other AR headsets that use much more simplistic optical systems. Magic Leap’s display offers a viewing area that has been estimated to be about 40 percent larger than the HoloLens, but is still a small box in someone’s perspective.

If you felt this was just someone’s occasionally harsh look at a big product, the intent is clear when Luckey attempts to estimate sales of the device by looking at the company’s order numbering system:

The Magic Leap order system was really easy to figure out for the first few days after launch.  I gathered some order numbers from friends and compared their order times, and I am pretty confident about predicting first-week sales.  Unfortunately, they changed the system shortly after I tweeted about it.  Based on what I do know, it looks like they sold about 2,000 units in the first week, with a very heavy bias towards the first 48 hours.  If I had to guess, I would put total sales at well under 3,000 units at this point.  This is unfortunate for obvious reasons – I know over a hundred people with an ML1, and almost none of them are AR developers.  Most are tech executives, “influencers”, or early adopters who work in the industry but have no plans to actually build AR apps.  This was a big problem in the early VR industry, and that was with many tens of thousands of developers among hundreds of thousands of development kits sold!  Multiplying the problem by a couple orders of magnitude is going to be rough for ML.

Luckey doesn’t seem like he’ll be publishing any follow-ups with this device either; he gave his personal device to iFixit to tear down after playing around with it for the review.

There are enough rifts in our society. Let’s unite people. Let’s unify our digital and physical worlds. Let’s create and be artists and build and play 😎

The @magicleap journey and party is going to fun, creative, and awesome. We have a clear north star. Everyone is welcome – but please be gracious.