The number of U.S. households watching streaming TV services – those that deliver cable TV-like programming over the internet – has grown a remarkable 58% over last year, according to new data from comScore. However, these services still account for a small portion of the overall market, as only 5 percent (4.9 million) of U.S. households with Wi-Fi streamed TV over one of these services in April 2018.

In citing that number, comScore was specifically looking at what it called “pure-play” vMVPDs (virtual multichannel video programming distributors) – a variation on a fancy industry term that refers to live TV services like Sling TV. These services stream multiple channels over the internet without supplying infrastructure like coax cable to do so, and don’t offer other content like original programming or user videos.

Today’s lineup of these “vMVPDs” includes: Sling TV, DirecTV Now, Playstation Vue, fuboTV, Philo, YouTube TV, and Hulu with Live TV. These “pure-play vMVPDs,” as comScore referred to them, are basically that same list, excluding Hulu Live and YouTube TV, as those also include access to non-linear, digital-only content like original programming. 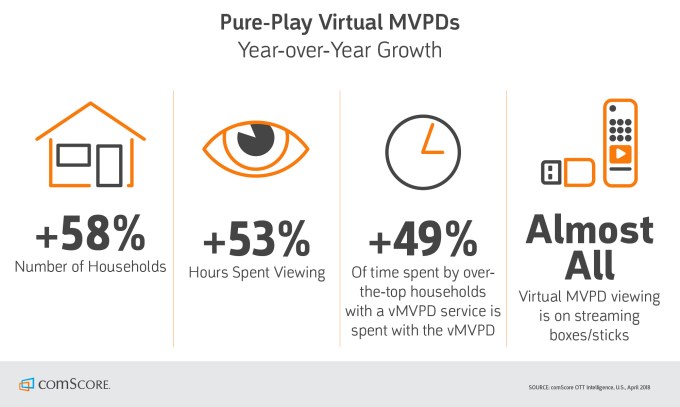 The firm found that consumer adoption of these “pure-play” live TV services is growing significantly, as more people cut the cord with traditional pay TV.

For example, these “pure-play” streaming services accounted for 10% of all the time spent streaming shows and movies over-the-top during the month of April 2018. That’s up 53% from last year.

And in households where one of these live TV services is present, nearly half the time that household spends streaming programming over-the-top is via that service.

Also interesting is the fact that, unlike with a lot of new technology, these live TV services aren’t just being adopted by younger demographics.

In April 2017, 29% of U.S. households using one of these service had a head of the household who was under the age of 35. In a year’s time. that percentage dropped 8 points to 21%, which indicates there are more older viewers now signing up. 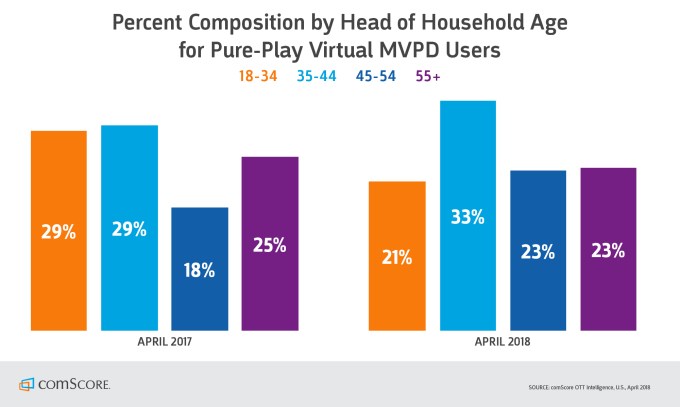 Another finding from the report is that the live TV services are coming into households that are already doing a ton of over-the-top streaming.

In April 2018, these households streamed an average of 128 hours of over-the-top content. That’s far more than the average of 54 hours. Around half the hours they spent was on streaming live TV, and the other half is streaming from other services, like video-on-demand services such as Netflix or Amazon Prime Video.

comScore estimates these live TV services will continue to grow in the months ahead, and even forecast that newcomers like Hulu Live and YouTube TV to well exceed a million users each sometime this year.

That would put all the vMVPDs at more than 7 million total users – or nearly one-third the number of households with satellite TV.