Who needs AI to have a good conversation? Spanish startup Landbot has bagged a $2.2 million seed round for a ‘dumb’ chatbot that doesn’t use AI at all but offers something closer to an old school ‘choose your adventure’ interaction by using a conversational choice interface to engage potential customers when they land on a website.

The rampant popularity of consumer messaging apps has long been influencing product development decisions, and plenty of fusty business tools have been consumerized in recent years, including by having messaging-style interfaces applied to simplify all kinds of digital interactions.

In the case of Landbot, the team is deploying a familiar rich texting interface as a website navigation tool — meaning site visitors aren’t left to figure out where to click to find stuff on their own. Instead they’re pro-actively met with an interactive, adaptive messaging thread that uses conversational choice prompts to get them the information they need.

Call it a chatty twist on the ‘lazyweb’… 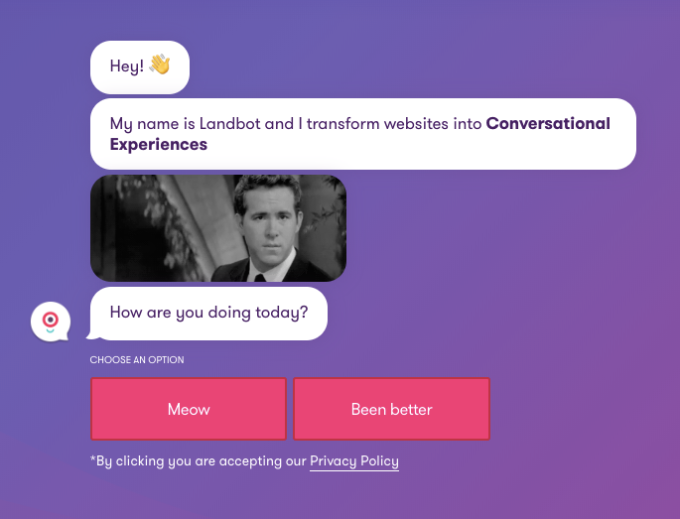 It’s also of course mobile first design, where constrained screen real estate is never very friendly to full fat homepages. Using a messaging thread interface plus marketing bots thus offers an alternative way to cut to the navigational chase, while simultaneously creaming off intent intelligence on potential customers. (Albeit it does risk getting old fast if your site visitors have a habit of clearing their cookies.)

Landbot, which was launched just over a year ago in June 2017, started as an internal experiment after its makers got frustrated by the vagaries of their own AI chatbots. So they had the idea to create a drag-and-drop style bot-builder that doesn’t require coding to support custom conversation flows.

“Since we already had a product, a business model, and some customers, we developed Landbot as an internal experiment. “What would happen with a full-screen conversation instead of the regular live-chat?,” we thought. What we got? A five times higher conversion rate on our homepage! Ever since, our whole strategy changed and Landbot, born from an experiment, became our core product,” explains CEO and co-founder Jiaqi Pan.

At the same time, the current crop of ‘cutting-edge’ AI chatbots are more often defined by their limitations than by having impressively expansive conversational capacities. Witness, for example, Google’s Duplex voice AI, heavily trained to perform very specific and pretty formulaic tasks — such as booking a hair appointment or a restaurant. Very few companies are in a position to burn so much engineering resource to try to make AI useful.

So there’s something rather elegant about eschewing the complexity and chaos of an AI engine (over)powering customer engagement tools — and just giving businesses user-friendly building blocks to create their own custom chat flows and channel site visitors through a few key flows.

After all, a small business knows its customers best. So a tool that helps SMEs create an engaging interface themselves, without having to plough resources they likely don’t have into training high maintenance chat AIs which are probably overkill for their needs anyway, seems a good and sensible thing.

Hence Pan talks about “democratizing the power of chatbots”. “Most landbot customers are marketing managers from small and medium companies that want to discover new ways of optimizing their conversion rates,” he tells us, saying that most are using the tool to convert more leads in their home/landing page; add dynamic surveys/forms to their websites; or explain their services — “in a more engaging way while scoring leads and being able to take over conversations when necessary”. (Buddy Nutrition is a Landbot customer, for example).

“We started our chatbot journey using Artificial Intelligence technology but found out that there was a huge gap between user expectations and reality. No matter how well trained our chatbots were, users were constantly dropped off the desired flow, which ended up in 20 different ways of saying “TALK WITH A HUMAN”,” he adds. “But we were in love with the conversational approach and, inspired by some great automation flow builders out there, we decided to give Conversational User Interfaces a try. Some would call them ‘dumb chatbots’.

“The results were amazing: The implementation process was way shorter, the technical background was removed from the equation and, finally, costs dropped too! Now, even companies with 100% focus on AI-based chatbots use Landbot as a truly cost-effective prototyping tool. We ended up creating the easiest and fastest chatbot builder out there. No technical knowledge, just a drag and drop interface and unlimited possibilities.”

Despite the startup-y hyperbole, the team does seem to have hit a sweet spot for their product. In less than a year since launching — via Product Hunt — Landbot has signed up more than 900 customers from 50+ countries, and is seeing a 30-40% MRR Growth MoM, according to Pan. Although they are offering a (branded) freemium version to help stoke the product’s growth, as well as paid tiers.

The $2.2M seed round is led by Nauta Capital, with Bankinter and Encomenda Smart Capital also participating. The plan for the funding is to grow headcount and pay for relocating Landbot’s head office from Valencia to Barcelona — to help with their international talent hunt as they look to triple the size of the team.

They’ll also be using the funding on their own brand marketing, rather than relying on viral growth —   acknowledging that marketing spend is going to be important to stand out in such a crowded space, with thousands of competing solutions also vying for SMEs’ cash.

And, indeed, other conversational UIs out in the wild delivering a similarly chatty experience on the customer end, though Landbot’s claim is it’s differentiating in the market behind the scenes, with easy to use, ‘no coding necessary’ customization tools.

On the competition from, Pan names the likes of Chatfuel and Manychat as “powerful but channel-dependent” rival chatbot builders, while at the more powerful end he points to DialogFlow or IBM Watson but notes they do require technical knowledge, so the market positioning is different.

“Landbot tries to bring chatbots to the average Joe,” he adds. “While still keeping features for developers that demand complex functionalities in their chatbots (they can achieve by configuring webhooks, callbacks, CSS and JS customization).”

He also identifies players in the automated lead generation space — such as Intercom (Operator) and Drift (Drift bot) — saying they are aiming to transform sales and marketing processes “into something more conversational”. “The flow customization possibilities are fewer but the whole product is robust as they cover each stage of the conversion funnel, all the way to customer service,” he adds.

In terms of capabilities, Landbot also rubs up against survey/form offerings like SurveyMonkey and Google Form — or indeed Barcelona-based Typeform, which has raised around $50M since 2012 and bills itself as a platform for “conversational data collection”.

Pan rather delightfully characterizes Typeform as “bringing that conversational essence to the almighty sequences of fields”. Though he argues it’s also more limited “in terms of integrations and real-time human take-over capabilities”, i.e. as a consequence of wrangling those “almighty sequences”. So basically his argument is that Landbot isn’t saddled with Typeform’s form(ulaic) straightjacket. (Though Typeform would probably retort that its conversational platform is flexible.)

Still, where customer engagement is concerned, there’s never going to be one way. Sometimes the straight form will do it, but for another brand or use case something more colloquial might be called for.

Commenting on the seed round in a statement, Jordi Vinas, general partner at Nauta Capital, adds: “Landbot has experienced strong commercial traction and virality over the past months and the team has been able to attract customers from a variety of countries and verticals. We strongly believe in Jiaqi’s ability to continue scaling the business in a capital efficient way.”