Swedish telehealth startup Kry has closed a $66 million Series B funding round led by Index Ventures, with participation from existing investors Accel, Creandum, and Project A.

It raised a $22.8M Series A round just over a year ago, bringing its total raised since being founded back in 2014 to around $92M.

The new funding will be put towards market expansion, with the UK and French markets its initial targets. It also says it wants to deepen its penetration in existing markets: Sweden, Norway and Spain, and to expand its medical offering to be able to offer more services via the remote consultations.

While the initial Kry offering requires patients to pay per video consultation this may not offer the best approach to scale the business in a market like the UK where healthcare is free at the point of use, as a result of the taxpayer-funded National Health Service.

“Our goal is to offer our service to as many patients as possible. We are currently exploring different models to deliver our care and are in close discussions with different stakeholders, both public and private,” a spokesperson told us.

“Just as the business models will vary across Europe so will the price,” he added. 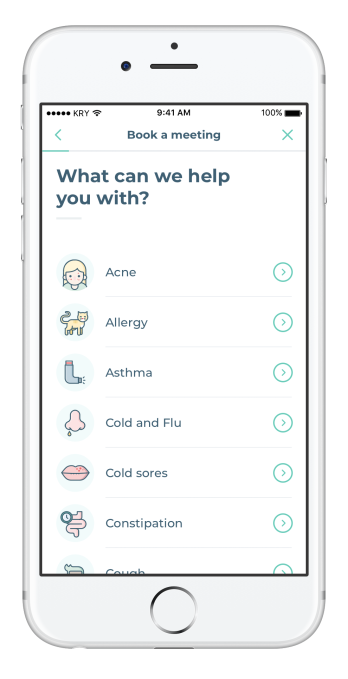 While consultations are conducted remotely, via the app’s video platform — with Kry’s pitch being tech-enabled convenience and increased accessibility to qualified healthcare professionals, i.e. thanks to the app-based delivery of the service — it specifies that doctors are always recruited locally in each market where it operates.

In terms of metrics, it says it’s had around 430,000 user registrations to date, and that some 400,000 “patients meetings” have been conducted so far (to be clear that’s not unique users, as it says some have been repeat consultations; and some of the 430k registrations are people who have not yet used the service).

Across its first three European markets it also says the service grew by 740% last year, and it claims it now accounts for more than 3% of all primary care doctor visits in Sweden — where it has more than 300 clinicians working in the service.

In March this year it also launched an online psychology service and says it’s now the largest provider of CBT-treatments in Sweden.

Commenting on the funding in a statement, Martin Mignot, partner at Index Ventures, said: “Kry offers a unique opportunity to deliver a much improved healthcare to patients across Europe and reduce the overall costs associated with primary care. Kry has already become a household name in Sweden where regulators have seen first-hand how it benefits patients and allowed Kry to become an integral part of the public healthcare system. We are excited to be working with Johannes and his team to bring Kry to the rest of Europe.”

As well as the app being the conduit for a video consultation between doctor and patient, patients must also describe in writing and input their symptoms into the app, uploading relevant pictures and responding to symptom-specific questions.

During the video call with a Kry doctor, patients may also receive prescriptions for medication, advice, referral to a specialist, or lab or home tests with a follow-up appointment — with prescribed medication and home tests able to be delivered to the patient’s home within two hours, according to the startup.

“We have users from all age groups. Our oldest patient just turned 100 years old. One big user group is families with young children but we see that usage is becoming more even over different age groups,” adds the spokesman.

There are now a number of other startups seeking to scale businesses in the video-call-a-doctor telehealth space — such as Push Doctor, in the UK, and Doctor On Demand in the US, to name two.