In startup land, the mandate is to get bought, go public or die trying.

And, as far as getting bought goes, one of tech’s Big Five could be a desirable acquirer. They have a lot of weight to throw around. Alphabet (the parent company of Google), Amazon, Apple, Facebook and Microsoft account for a titanic amount of market value — close to $3.9 trillion at time of writing. At least, that’s according to Crunchbase News’s dashboard of notable tech stocks.

When challenged by one another, these hulking behemoths of the tech sector more often fight than flee. And when challenged by a scrappy upstart, it is likely that they will gobble up the talent, technology and business of any aspiring competitor. It’s the circle of life.

And it’s those acquisitions we’re going to look at here. 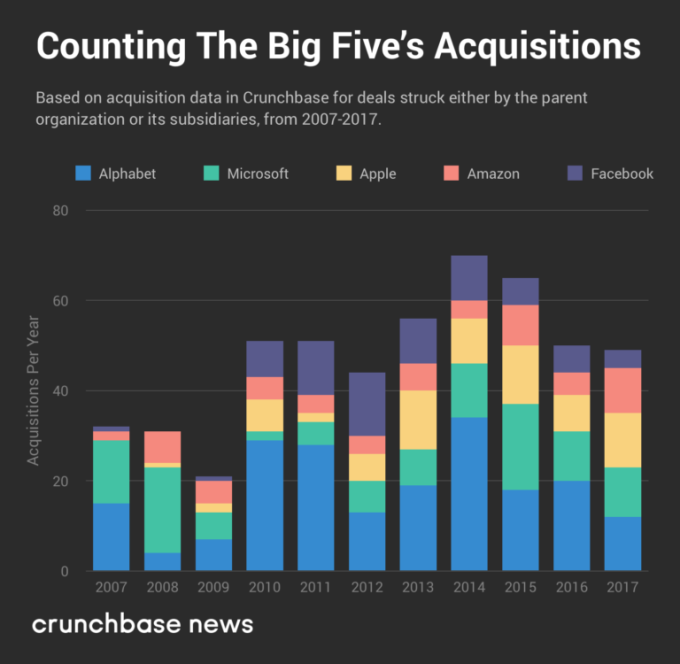 But what the Big Five lack in quantity is made up for in size. If you’ll forgive the big-game pun, acquisitions by Big Five account for a lion’s share of big deals in dollar terms.

So, for each of the Big Five, let’s see just how big some of those deals got. We base our analysis on Crunchbase data that, whenever possible, has been cross-checked with public news sources and regulatory filings. We’ll proceed from the most valuable (in market capitalization terms) to the least.

Despite being the most valuable among the Big Five, Apple’s acquisitions are not just among the smallest of the bunch, but also the least disclosed. In other words, out of the deals listed in Crunchbase and elsewhere, most of them don’t have dollar values attached to them. This may speak to Apple’s secretiveness and its tendency to build most of its products and services in-house.

Apple’s biggest M&A deal to date was its $3 billion buyout of Beats Electronics, which is perhaps best known for its flashy wireless headphones. But it’s not the headphones that caught Apple’s eye. Rather, it was its streaming service, which Apple CEO Tim Cook told ReCode’s Peter Kafka was “the first subscription service that really got it right.”

Including the Beats deal, here are the largest M&A deals we were able to find. 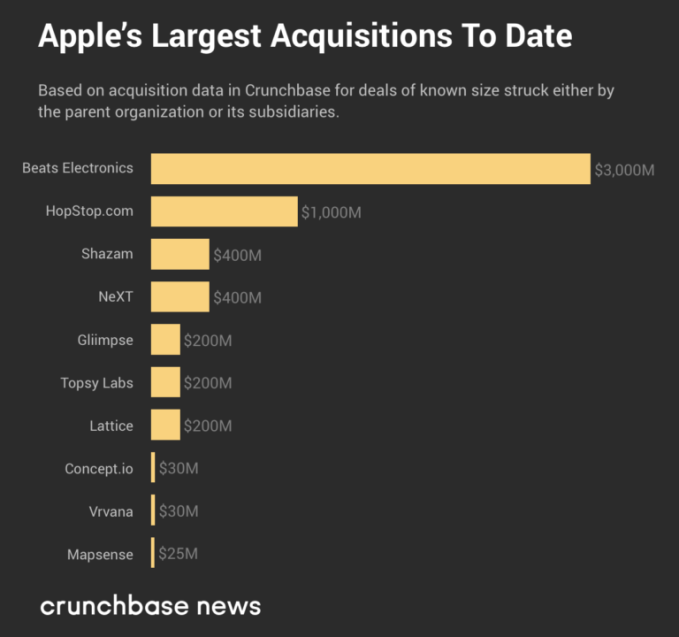 Now, in all seriousness, Amazon’s $13.7 billion buyout of Whole Foods in June 2017 brought the online shopping giant squarely into the world of brick-and-mortar retail as well. And while the Whole Foods deal was Amazon’s biggest splurge to date, it’s certainly not alone in the company’s collection of commerce company buys. These include Amazon’s buyout of Quidsi (the parent company of Diapers.com and Soap.com, which was the first to offer the free two-day shipping for which Amazon Prime is famous), footwear and clothing retailer Zappos, and Middle Eastern e-commerce site Souq.com. 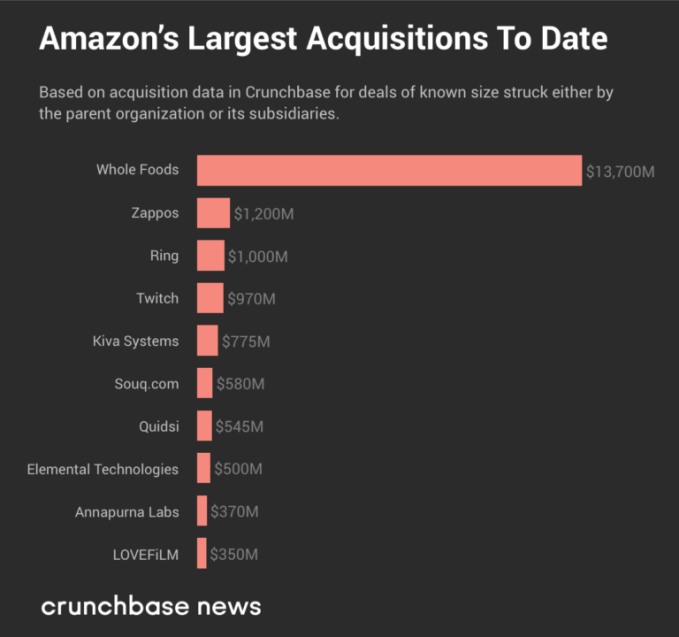 But for all the resources Alphabet has put toward M&A, its acquisitiveness resulted in a rather mixed bag of results. Most glaring amongst its duds is its $3.2 billion buyout of Nest Labs and, relatedly, the $555 million spent on Dropcam (which would later be rebranded as part of Nest’s home security offering).

Nest reportedly failed to meet revenue expectations and seize a dominant position in the connected home market, ceding ground to incumbents like Honeywell. And there are plenty of scrappy upstarts nipping Nest’s heels in markets like home security, smart doorbells and smart locks.

This being said, then-Google’s YouTube deal is likely Alphabet’s best acquisition from an ROI perspective. Although Alphabet doesn’t break out YouTube’s revenue, some good estimates and public market comps suggest the video streaming unit could be worth a cool $100 billion. 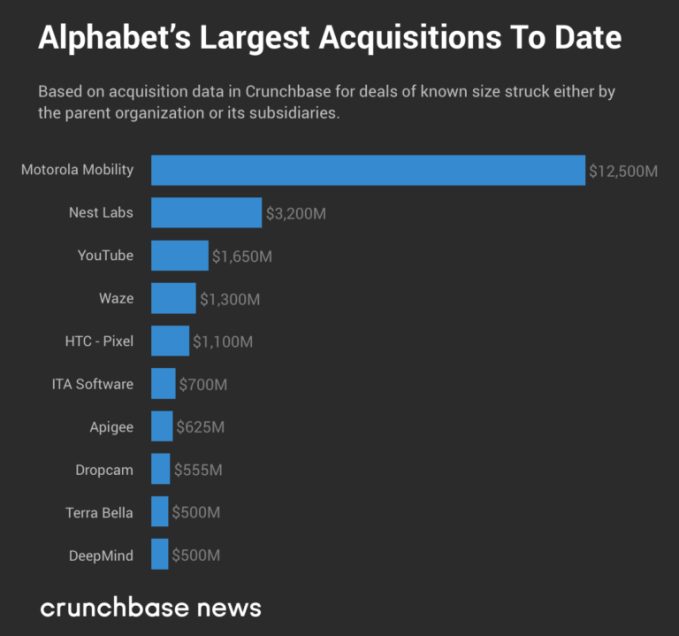 Microsoft made news this week by announcing its acquisition of software version control and code hosting platform GitHub for $7.5 billion. And, at this point, it seems like Microsoft is timing announcements of its biggest deals just to dunk on Apple. Myke Hurley, a tech podcaster and the founder of Relay FM, observed on Twitter that Microsoft’s 2016 acquisition of LinkedIn and its GitHub deal were both announced on the opening day of Apple’s Worldwide Developers Conference.

Apart from cheeky timing, you will notice that Microsoft has made the largest M&A deals among tech’s Big Five. 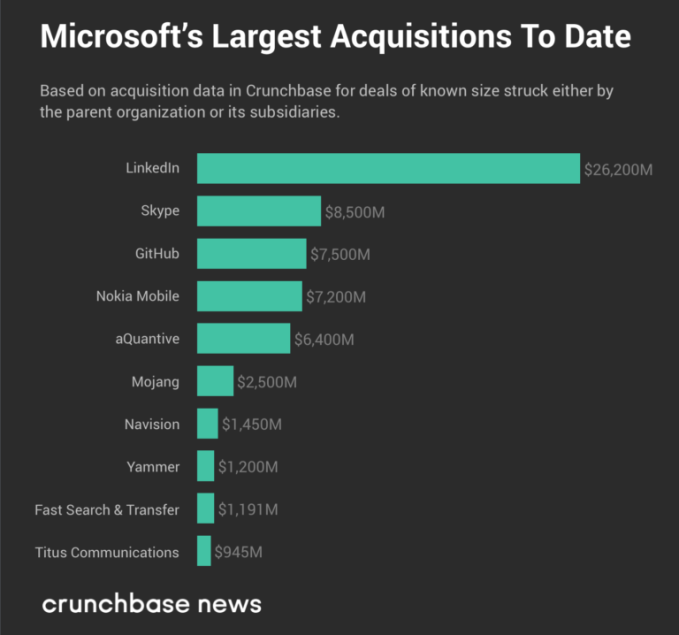 Of the Big Five companies in tech, Facebook’s M&A patterns seem to be the most binary. Its deals are either tiny or humongous. There isn’t much of a middle ground.

Some of Facebook’s biggest acquisitions present a case study of acquiring one’s way to nearly insurmountable market dominance. Although its acquisitions of Instagram and WhatsApp didn’t cause much of a stir at the time, today these deals are seen as a cautionary case for current and future antitrust regulators.

On a brighter note, though, Facebook’s M&A record is also a lesson in the “buy versus build” dilemma many companies face. It’s sometimes more expedient to buy a company (and, critically, its engineering team) than to build new features from scratch. For many of the smaller deals listed here, we can see that Facebook opted to buy. 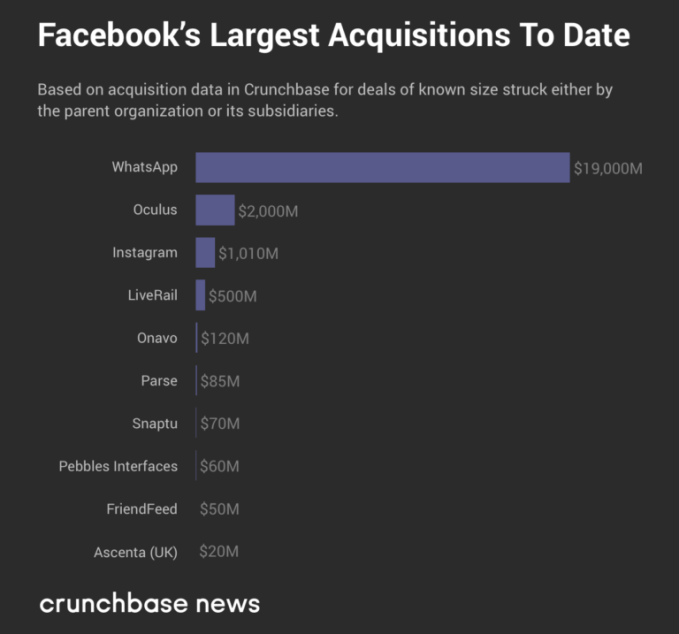 The Big Five’s acquisitions in perspective

At the very top of the tech food chain, the Big Five are in a unique position, and not just as rainmakers for VCs seeking liquidity.

Alphabet, Amazon, Apple, Facebook and Microsoft are some of the most powerful companies operating today, and their acquisitions tell part of the story of how they got to prominent positions in the first place.

Although some acquisitions appear to come out of the blue, it’s important to remember that one doesn’t just buy a company for the heck of it. There’s a strategic motivation for these deals at the time they’re made. And when these deals are struck, they can telegraph the company’s future plans.