Scout.fm wants to change the way people listen to podcasts. Instead of scouring through the over 500,000 shows in your current podcast app, this startup’s new curated podcast service will just ask you a few questions to find out what you like, then create a podcast station customized to you. The experience is primarily designed for use on smart speakers, like Amazon’s Alexa-powered Echo devices, but is also available as iOS and Android applications.

The company was founded just over a year ago by Cara Meverden (CEO), previously of Google, Twitter, Indiegogo, and Medium; along with Saul Carlin (president and COO), previously head of publisher development at Medium, and before that, Politico; and Daniel McCartney, (CTO) previously an engineer at GrubHub, Klout and Medium. 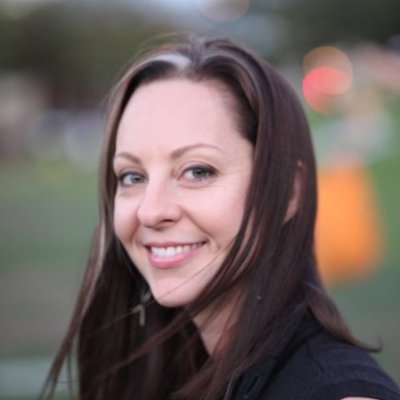 At Medium, Meverden explains, they saw an explosion of people creating great written content; but now those publishers had begun to create great audio content, as well.

But unlike on Medium, which helps to guide readers to topics they like, people today have to seek out new podcasts for themselves. Scout.fm wants to offer a better system, and hopefully bring more listeners to podcasts as a result.

“We want to take podcast listening mainstream,” she says. “We think the key to that is making podcasts as easy to listen to as the radio – and we think that’s even more critically important, as we enter the smart speaker era.”

The Scout.fm service began as a series of experiments on Alexa.

The company launched over 30 Alexa skills, including a “Game of Thones”-themed podcast radio that was popular while the show was airing on HBO. The goal was to test what worked, what topics and formats drew listeners, and gain feedback through calls-to-action to participate in user surveys.

The result is Scout.fm, a curated podcast service that’s personalized to your listening preferences – and one that improves over time.

Here’s how it works on the Alexa platform. You first launch the app by saying “Alexa, open Scout fm.” The app will respond (using a human voice actor’s voice, not Alexa’s) by explaining briefly what Scout.fm does then asks you to choose one of three types of talk radio stations: “Daily news, brain food, or true stories.”

The first is a news station, similar to Alexa’s “Flash Briefing;” the second, “brain food,” focuses on other interesting and informative content, that’s not day-to-day news; and the last is a true crime podcast station.

The voice app will then ask you a few more questions as part of this setup process to find out what other subjects appeal to you by having you respond, on a scale of one to ten, how much of a history buff you are, or how much you’re interested in culture, like art, film and literature, for example.

On subsequent launches, the app will simply ask if you want to return to your “Brain Food” (or other selected) station. If you say no, you can try one of the other options.

However, once the setup process is over, the experience becomes very much like listening to talk radio.

A podcast will begin playing – Scout.fm favors those without ads at the very beginning – allowing you to listen as long as you’d like, or say “next” to move to the next one. Each new podcast episodes has a brief, spoken introduction that Scout.fm handwrites, so you know what’s coming up. Your listening can go on for hours, offering you a hands-free means of switching podcasts and discovering new favorites.

The app will also adjust to your preferences over time, removing those you tend to skip – much like how the thumbs down works on Pandora.

Scout.fm doesn’t include every podcast that’s out there. Instead, it’s a curated selection of a few hundred with high production values, narrative storytelling and tight editing. 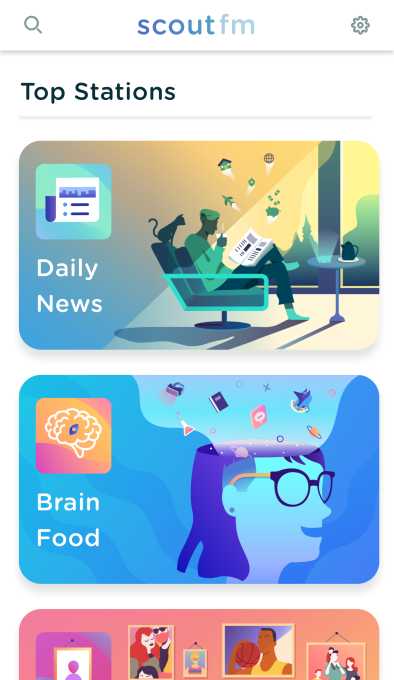 “So if we listen to something and the two co-hosts kind of go on for half an hour at the beginning, that’s not a great podcast for this format,” Meverden says. “We want shows where they’re going to get right into it. That right away limits things, but there’s still an abundance of content.”

For example, some of the podcasts Scout.fm includes come from The Wall St. Journal, The New York Times, ESPN, and podcast networks like Gimlet, Wondery, Parcast and others.

The same curated selection of podcasts is also available in Scout.fm’s mobile apps for iOS and Android, which work with the voice assistant on the phone. (For example, you can tap your AirPods to wake Siri then say “Next” to move between podcasts.)

“If you’re jogging, our apps are an excellent companion because you don’t have to go back to your phone and try to find a new thing to listen to,” notes Meverden.

Since Scout.fm’s launch, it has accrued 1.5 million minutes listened across its network of experimental apps ahead of today’s public debut. The Alexa user base listened for twice as long as mobile users.

Currently, the service is not generating revenue, but, in the future, the team envisions call-to-action ads that could work with the Alexa app to share more information about the products, as well as ways it could utilize the newer in-app purchase mechanisms for Alexa skills.

The company is backed by $1.4M in seed funding from Bloomberg Beta, Precursor Ventures, Advancit and #Angels.

“The Scout team’s unique insight is that podcasts, no matter how good, won’t go mainstream until it is much simpler for consumers to find and listen to the content that’s right for them,” said Charles Hudson, managing partner at Precursor Ventures, in a statement about the investment. “The fast adoption of smart speakers changes this. We can open up podcasts to an entirely new audience,” he said.

Scout.fm is available on Alexa, iOS and Android.