Instagram is jumping into the time well spent movement, following the unveiling of Google’s new time management controls last week. Code buried in Instagram’s Android app reveals a “Usage Insights” feature that will show users their “time spent”. It’s not exactly clear whether that will be your total time spent in Instagram ever, which could be a pretty scary number to some users, or within some shorter time frame like a day, week, or month. Instagram has also prototyped a new commenting interface with a row of quick-add emojis and an @ button for tagging friends. 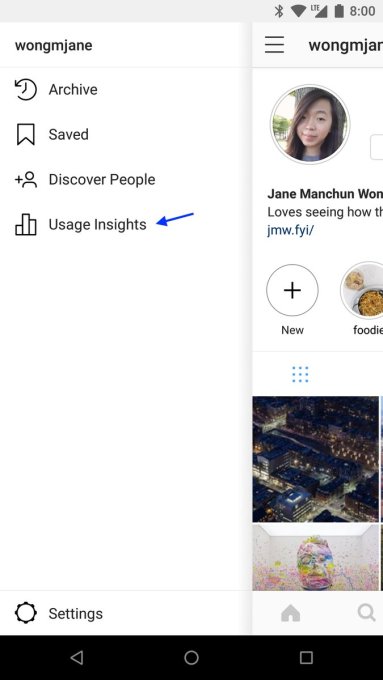 [Update 5:30pm: Instagram CEO Kevin Systrom has now tweeted a link to this article with a confirmation that Instagram is building this Usage Insights feature. “It’s true . . . We’re building tools that will help the IG community know more about the time they spend on Instagram – any time should be positive and intentional . . . Understanding how time online impacts people is important, and it’s the responsibility of all companies to be honest about this. We want to be part of the solution. I take that responsibility seriously.” This article has been updated to reflect the confirmation.

It sounds like Instagram is willing to endure a potential reduction in usage and ad views to be serve the mental health of its community. That’s an admirable pledge, and we’ll see what degree of transparency Instagram rolls out. ]

We're building tools that will help the IG community know more about the time they spend on Instagram – any time should be positive and intentional.

By being upfront with users about how much of their lives they’re investing in their favorite apps, tech giants could encourage people to adopt healthier habits and avoid the long, passive, anti-social browsing sessions that can harm their well-being. These features could also help parents keep track of what their kids are doing online. Both might lead people to spend less time on certain apps, but they could be happier with companies like Instagram.

The Usage Insights screenshot and “time spent” code were discovered by prolific app investigator Jane Manchun Wong inside the Instagram for Android application package, or “APK”. She wrote “Be self-aware or be prepared to be ashamed for Instagram addiction”. When asked by TechCrunch for more evidence about how the feature worked, she tweeted screenshot above of Instagram’s code that shows a “slideout_menu_time_spent” element. 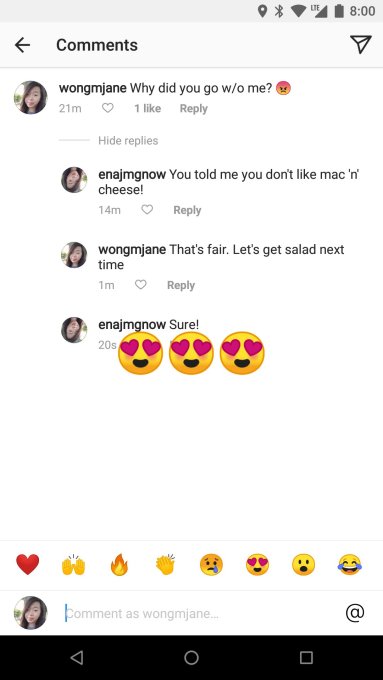 Several of Wong’s other recent discoveries of unlaunched features like Facebook Avatars and Twitter encrypted DMs were subsequently confirmed by the companies as being in testing. She also just spotted code revealing an new Instagram commenting interface with an Emoji Bar that let’s you add the most popular little icons with a single tap, and an @ button that reminds you to tag a friend.

She also found code showing Instagram prototyping Android notification actions that let you reply to a comment directly from a notification without opening the Instagram app.

Google’s I/O conference saw the debut of a new Android time management tool that shows a daily look at how much time you spend on different apps, and lets you set time limits. But since most of Google’s apps outside of YouTube are utilities designed to be used as quickly as possible, it might have less to lose by revealing how users spend time on their phones than Facebook. Many are hoping to see Apple launch time management features at WWDC this year.

Offering “Usage Insights” aligns with Facebook’s recent discussion of research that shows active social networking, like messaging, posting, or commenting can be positive for people’s well-being, but endless zombie scrolling can make people feel worse. While Facebook hasn’t created anything like this feature in its own apps, it’s started to change its algorithm to promote active interactions while downranking viral videos that people consume passively. That led to Facebook’s first ever decline in its North American daily user count in Q4 2017, though it was growing again in the region by Q1 2018. 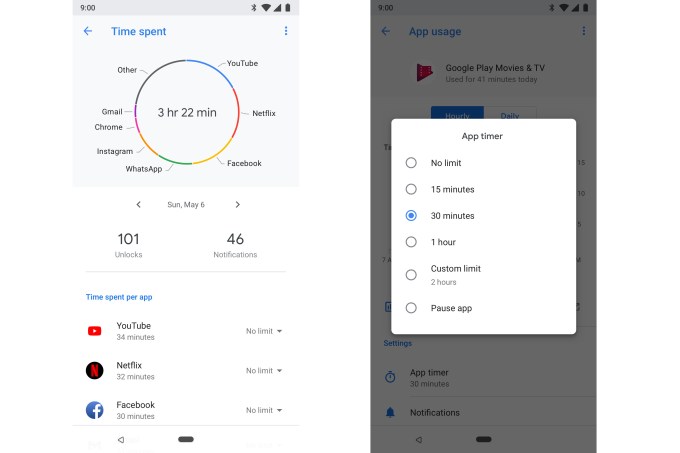 Instagram’s photo and video-heavy feed especially lends itself to the negative social networking behaviors like envy spiraling, where users constantly compare themselves against the glamorous highlights posted by their friends. Letting users know how long they’re Instagramming, or even letting them set time limits, could push people to go out and live life instead of watching through a screen as others live it.

The question is what metrics we’ll get to see. Total time spent on Instagram ever could be a terrifying statistic that might drive users away. Daily or weekly counters would encourage more concientious use without being as scary. Breaking out time by feed browsing, Explore/other browsing, Stories, and Direct could identify the most harmful passive consumption behaviors.

Systrom’s pledge mirrors that of Facebook CEO Mark Zuckerberg’s promise from January, when he wrote about the well-being algorithm change: “I expect the time people spend on Facebook and some measures of engagement will go down. But I also expect the time you do spend on Facebook will be more valuable. And if we do the right thing, I believe that will be good for our community and our business over the long term too.” They both believe that priortizing time well spent is not only moral, but the right long-term business strategy since ignoring unrest about overuse could be an existential threat to their apps’ popularity.

The difference between good and bad Facebooking