Hulu is announcing several new shows this morning at the Digital Content NewFronts, running the gamut from romantic comedy to horror.

On the romance front, the streaming service has placed a series order for an update of Four Weddings and a Funeral, which will be written and executive produced by Mindy Kaling and Matt Warburton. The pair previously worked together on The Mindy Project, which started out as a series on Fox before becoming a Hulu Original.

Will Kaling be appearing on-screen in the new show? Hulu’s announcement doesn’t say. She did appear on-stage at the very end of this morning’s NewFronts event, where she said her version of the story will feature a diverse cast including Pakistani characters, black characters, even a few older characters — “but not too many.”

As for horror, Hulu unveiled a new series called In The Dark, which will be produced by Blumhouse Television, the TV arm of the studio behind horror hits like The Purge, Split and Get Out. Each episode will be a feature-length standalone.

And rather than releasing all of them at once, or even every week, Hulu will air a new episode on the first Friday of each month — apparently each episode of will tie in to a holiday during the month it airs. The first segment, “The Body,” will air on October 5 and tell a selfie-oriented Halloween story.

“We want Hulu’s audience wondering every month what scary holiday will be next, and we hope that you will never look at a calendar the same way again,” Blumhouse founder Jason Blum said. 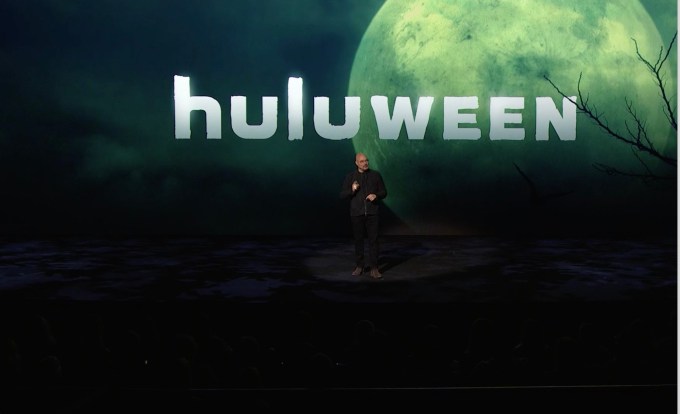 In addition, Hulu said it will be celebrating Halloween (or, uh, “Huluween”) with a short film festival focused on aspiring filmmakers.

The network also picked up Ramy, a show based on the comedy of Ramy Youssef. This is Hulu’s first series order from A24 (the independent studio that released Lady Bird, Moonlight and Ex Machina), and it will be executive produced by Jerrod Carmichael.

Hulu didn’t just announce new titles. It also revealed that The Handmaid’s Tale has been picked up for a third season — no surprise, since the show won Hulu its first Emmy Awards and is also one of the service’s most-watched dramas. And it brought out the stars of its already-announced shows Castle Rock, The First and Catch-22 to promote their titles.

Other announcements (there were a lot!): Hulu said it’s reached a deal to become the exclusive subscription streaming home for ABC’s The Good Doctor, and for future DreamWorks Animation feature films.

And the company revealed that it’s passed 20 million subscribers, with plans to add offline viewing.