CoinMarketCap seemed to appear out of nowhere last year during the rise of bitcoin and cryptocurrencies, establishing itself as the de facto source for tracking the rise and fall of valuations.

That’s brought incredible amounts of traffic and attention. Alexa ranks it as the world’s 174 most popular website, and it enjoys more traffic than the likes of the Wall Street Journal, Bloomberg and other media. Yet despite that power, precious little is known of the company, as the Journal wrote earlier this year.

CoinMarketCap has also done nothing to expand out and take advantage of its position at the center of the rise of cryptocurrencies, which are collectively worth over $400 billion. But today — its fifth anniversary since starting the website — it has released its first mobile app for iOS, rebranded its website and prepared to launch more new services.

The app itself is long-awaited, but the truth is that most crypto enthusiasts already have a go-to app for checking prices or keeping an eye on their tokens.

The app does what you’d imagine. It lets users sort by coin market cap ranking, name, price or price percentage change within 24 hours, and you can switch between all tokens, the top 100 or a ‘watchlist’ for specific tokens. There’s a single banner ad at the bottom of the app, and at the moment — somewhat annoyingly — no way to pay for an ad-free version.

Token prices themselves can be tracked across 24 hours, seven days or 30 days. There’s currently no way to track the value of specific numbers of tokens, so the app doesn’t replace portfolio trackers. 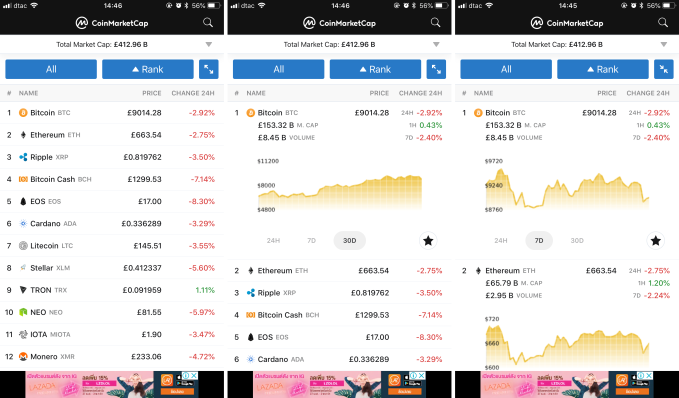 The irony is that nearly all crypto tracking apps use CoinMarketCap’s API to get their data. But the company’s sees two opportunities there. First that it has a strong brand.

“Are there other places where people can get the data and do we have copycats? Sure. However, we are the only site that you can guarantee is sourcing, gathering, and verifying the data itself and we pride ourselves in being the first and best regarded within the industry,” a spokesperson told TechCrunch via email.

In addition to the app launch, CoinMarketCap said redesigned its website and upgraded its API. It said a new commercial API, which will be include historical data, is planned with more to come. So, while the app doesn’t break new ground for consumers, it is a starting point to build a fuller experience and develop beyond a popular website that monetizes via advertising. (The company said it gets 15 million unique visitors per month.)

“We keep our eyes on incoming requests from users, paying close attention to what people want to see and how they can get the most out of our data. We’re excited to deliver on many of those requests today,” CoinMarketCap CEO Brandon Chez said in a statement.

You can get the CoinMarketCap app here.

Note: The author owns a small amount of cryptocurrency. Enough to gain an understanding, not enough to change a life