You can now pay IKEA to help you put together its confusing furniture. The company announced this morning it’s rolling out the new TaskRabbit At-Home Assembly service in select U.S. markets where TaskRabbit is available, and in six stores in New York and San Francisco.

The service is a result of IKEA’s acquisition of the contract labor marketplace TaskRabbit last September for an unknown sum. The deal arrived at a time when IKEA is pressed to compete with e-commerce rivals like Amazon, which now sells its own furniture as well as in-home assembly. It also increasingly competes with popular — and similarly affordable — online furniture stores, like Wayfair, which ship home goods directly to customers’ homes.

The new TaskRabbit assembly service will be offered both online and in-store, says IKEA, with furniture assembly starting at $36.

The fee will be based on a flat rate per type of item, and won’t include some IKEA products, like kitchens and bathrooms.

The retailer’s U.S. website, IKEA-USA.com, has been updated so online shoppers will be able to see if at-home assembly is available for the selected product based and their location. 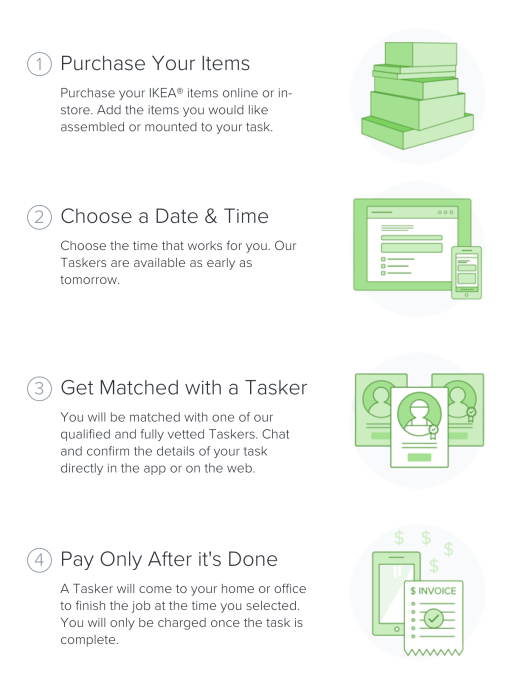 To use the service, customers will purchase their items online or in-store, as usual, and add the items they want to assemble to their task. They’ll then pick the date and time they want assembly, get matched with Tasker from TaskRabbit and pay only when the assembly is complete.

Same-day assembly is not available, however next-day may be an option.

“We are always looking at ways we can innovate and help make our customers lives at home easier,” says Jackie DeChamps, Chief Operating Officer & EVP, IKEA U.S, in a statement about the service’s launch. “We are excited to participate in the on-demand, sharing economy and give our customers access to a flexible, convenient and affordable service solution with the new TaskRabbit At-Home Assembly service.”

Ahead of its acquisition, TaskRabbit had marketed its service as an option for those who wanted help with their furniture assembly, and had even been piloting a program around this idea in the U.K., Recode had reported at the time.

It’s the latest of several initiatives IKEA is taking to bolster its online business in particular, including the recent introduction of lower shipping and delivery fees. In January, IKEA introduced a new shipping and delivery option starting at $29, no matter how many items a customer orders. (The rates may vary based on demand and distance to the IKEA store, and max out at $59). Small items also only cost a flat parcel rate of $9, regardless of ZIP code.

IKEA also rolled out Click & Collect in 31 of its 47 U.S. stores last year, allowing online shoppers to pick up in the store without having to wait in the checkout line. This will reach additional stores in 2018.

And the company began to work with Alliance Data to offer co-brand and private label credit card programs, like IKEA Projekt Card, to help customers finance their orders.