LinkedIn used to have its own business card scanning app, CardMunch, which served a useful purpose in a world where paper cards simply refuse to die. But that app was shut down back in 2014, with LinkedIn suggesting users move to Evernote instead. Today, Microsoft is bringing back business card scanning – but this time, not with a dedicated card scanner app, but with its multipurpose, A.I.-powered camera app, Microsoft Pix.

Since its launch in 2016 as an iOS app that helps you take better pictures, Microsoft has increasingly found more productivity-related uses for Pix. In September, for example, the app was updated to include a way to snap better photos of documents, post-its, whiteboards, and yes, business cards.

But with today’s update, Pix’s business cards smarts are being upgraded – this time with a LinkedIn integration. In the latest version of the iOS app, Pix includes a new business card feature that will add new contacts both to your iPhone’s address book, as well as to your LinkedIn account.

To take advantage of this option, you just launch the app and point it at the business card. Pix then automatically detects what it’s seeing, and asks you if you want to “Add Contact” or “Find on LinkedIn.”

When you tap to add the contact, Pix captures and organizes the contact information – like name, phone, address, and URL – into the correct fields, and adds the newly created contact to your iPhone’s Contacts app. If you opt for LinkedIn, you’re able to view the person’s profile in the LinkedIn app on your iPhone, and optionally add them to your list of connections.

The business card scanning feature, like others in Pix, leverages A.I. technology under the hood to enhance and improve the image. In the case of business cards, Pix is able to detect the edges of the cards, sharpen focus, and tweak the angle of the photo to render the image in a straight-on perspective so it can extract the information from the card. 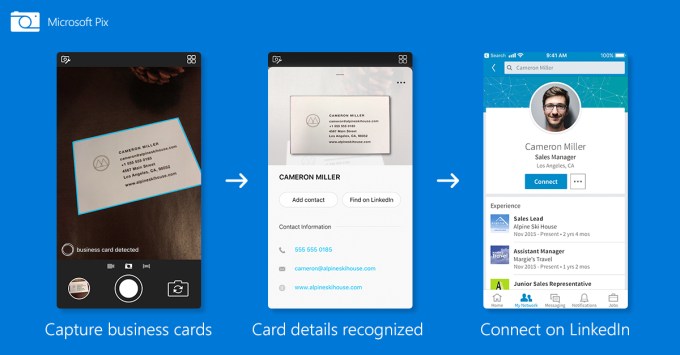 The Pix update is just one of several ways Microsoft has integrated with LinkedIn since acquiring the company for $26.2 billion in 2016. It has also tied LinkedIn into its other products, including Office 365, Outlook.com, Dynamics 365, Word, and Windows 10.

The updated version of Microsoft Pix is rolling out today. You may not have it yet, as it has to propagate across the App Store, so keep your eyes peeled.