Waze’s carpooling app for commuters is relaunching with a number of new features designed to make it easier and safer to use. The company says it will now allow people to choose their shared rides, instead of being matched blindly. That means riders will be able to pick drivers based on things like star ratings, mutual friends, whether they share the same workplace, and more. Custom filters, including those that let you select a driver by gender, plus improvements to the matching process are also being rolled out.

Originally trialed in markets like San Francisco, Sacramento and Monterey, Waze Carpool has since expanded across California, as well as to Texas and Israel.

The company says feedback from these early customers led to the launch of the new features.

Before, riders and drivers were matched up via an algorithm based on pickup and dropoff locations. But unlike with services like Uber where drivers are vetted, the carpooling app crowdsources rides from everyday commuters. That’s led to customers complaining of flaky drivers, who were late or didn’t even show up, according to the app’s reviews on the app stores.

Allowing customers to select only those drivers with high star ratings should help address that problem. 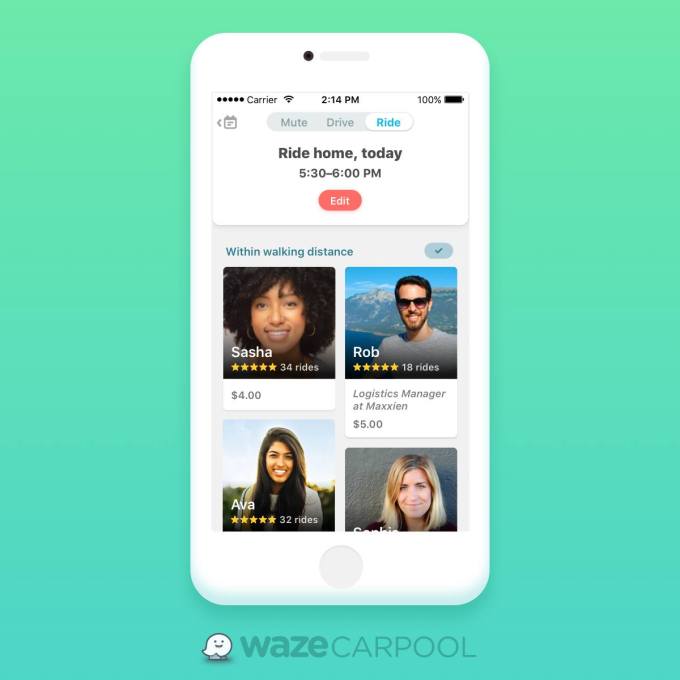 In addition, riders can choose to only be matched with co-workers or drivers who have mutual friends with them, or filter their options by gender, among other things. The goal is to help riders feel safer getting into cars with strangers, on a service where drivers aren’t screened.

Another new feature allows Waze Carpool users to improve their chances of getting matched, by allowing them to send out multiple drive or ride requests. However, the update may have hit a snag here – some drivers say that since the update launched, they aren’t getting paired with riders, even regulars, despite having a high rating. After several complaints, posted to the Waze Carpool Facebook group, Waze responded that it’s working to “correct this issue.”

Presumably, these are launch day bugs that will be worked out soon. But they’re certainly souring some users on the new app.

The updated version of Waze Carpool is available for download on iOS and Android.