Not sure what there is to add to the headline, really. Well, I guess I should probably explain a bit.

Back in 2016 (on my birthday in fact) researchers from the University of Tokyo posted an interesting video showing a projector and motion tracking system working together to project an image onto moving, deforming surfaces like a flapping piece of paper or dancing person’s shirt.

Panasonic one-upped this with a more impressive display the next year, but the original lab has clapped back with a new video (spotted by New Atlas) that combines the awkwardness of academia with the awkwardness of dancing alone in the dark. And a quote from “The Matrix.”

Really though, it’s quite cool. Check out the hardware: 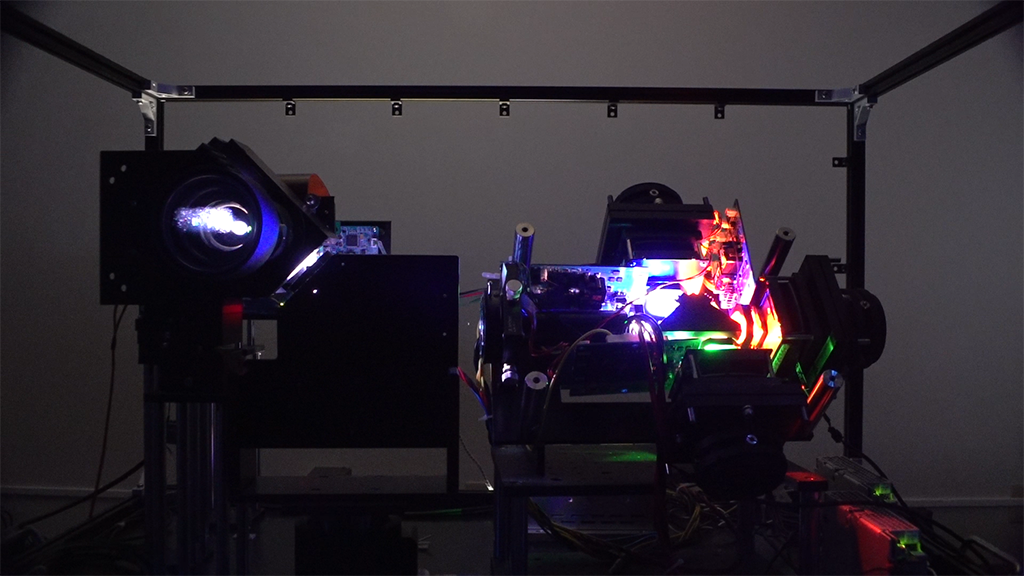 This dynamic projection mapping system, which they call DynaFlash v2, operates at 947 frames per second, using a depth-detection system running at the same rate to determine exactly where the image needs to be.

Not only does this let an image follow a person’s movement and orientation, but deformations in the material, such as stretching or the natural contortions of the body when moving.

The extreme accuracy of this process makes for strange possibilities. As Ishikawa Watanabe, the leader of the lab, puts it:

The capacity of the dynamic projection mapping linking these components is not limited to fusing colorful unrealistic texture to reality. It can freely reproduce gloss and unevenness of non-existing materials by adaptively controlling the projected image based on the three-dimensional structure and motion of the applicable surface.

Perhaps it’s easier to show you:

Creepy, right? It’s using rendering techniques most often seen in games to produce the illusion that there’s light shining on non-existent tubes on the dancer’s body. The illusion is remarkably convincing.

It’s quite a different approach to augmented reality, and while I can’t see it in many living rooms, it’s clearly too cool to go unused — expect this to show up in a few cool demos from tech companies and performance artists or musicians. I can’t wait to see what Watanabe comes up with next.