These days, home movies aren’t recorded with handheld video cameras, but rather with our smartphones. Unfortunately, there’s a downside. Our iPhones default to lower quality video so recordings won’t eat up storage space; and while you can adjust that all the way to 4K on newer devices, that would drastically increase your storage consumption. You’d soon receive “out of space” warnings if you always recorded in high quality, and would then have to continually offload your videos to the cloud. A new startup called Air wants offers an alternative solution.

Instead of using the native camera app to record, the Air app automatically records in 4K Ultra HD and automatically stores your videos in the cloud in a private gallery. That means you’ll never run out of room, even if you’re recording long-form home movies or any other hiqh-quality videos.

Of course, there are already solutions for storing video in the cloud, including iCloud which effectively comes built into the iPhone, as well as Google Photos, which is a top photo-sharing app with a handy “free up space” option. Amazon and Dropbox also have cloud storage solutions popular with consumers.

But according to Air co-founder and CEO Shane Hegde, no competitors have optimized their product for video alone.

“Video is unique because of its size and complexity, but most solutions treat them the same as photos: reducing quality and making playback a nightmare,” he says. “We’ve built our product with the same advanced video technology as Netflix and Youtube to bring users a seamless, user friendly video experience.”

Air’s service automatically transcodes all videos so they’ll adaptively stream during playback. That means you don’t have to wait for videos to load, even if you don’t currently have access to decent bandwidth. Air also doesn’t compress your videos when you want to share them – you can just send a friend or family member a link to the video and the recipient gains access to the high-quality file.

In addition, Air includes a collaborative video editing feature called Reels. Designed for capturing bigger events – like vacations or weddings, for example – anyone can contribute their video clips to a Reel, then share the end result across social media or anywhere else they prefer. 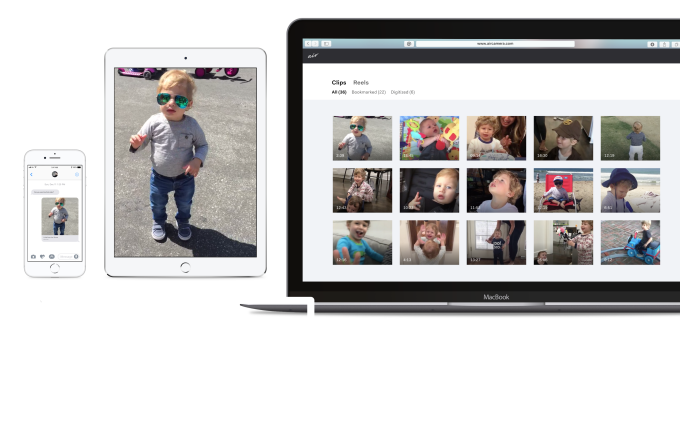 At $4.99 per month, Air comes out as a little pricier than the entry level pricing for traditional cloud storage. Today, it’s only $0.99/month for 50 GB on iCloud, for example, or $1.99/month for 100 GB on Google (which includes Photos, Gmail, and Drive), with prices that go up from there. You’ll have to regularly record a lot of home movies to benefit from paying for Air’s unlimited storage.

But that’s why the company is mainly pitching the product mainly to young parents, who do exactly that. However, semi-pro videographers could benefit as well, as could anyone else who wants to more easily record in 4K/HD without worrying about storage space.

Another perk to using Air is its optional digitization service for physical media. The service requires a $50 deposit, but accepts any storage device or video format, including VHS tape, film reels, hard drives, DVDs, USB drives, and more. Pricing is per hour of digitization and varies based on format.

Hedge, who co-founded Air with fellow Stanford grad Tyler Strand (CTO), says he was inspired to simplify recording high-quality home movies after having grown up in a family that recorded with Sony Handycams which ultimately led to a collection of unwatchable video, as technology changed.

“I didn’t have the camcorder; The new laptop lacked a DVD player; The ‘data’ sat inaccessible on outdated devices,” he says. “In late 2016, I decided to quit my job and bring the content format of home movies back to life. I wanted to create a company based entirely around this personal passion: A product that would allow people to capture unlimited home movies on their phone and a space to preserve the prized possessions they already had.”

Before Air, Hedge founded a startup called Swap while at Stanford, worked in investing at HPS Partners, then was Chief Digital Strategist for Revolt TV in L.A. Tyler, meanwhile, also launched a startup at Stanford, hostess.fm, which he sold to SFX Entertainment. Most recently he worked as founding partner and director of product at Postlight.

Brooklyn-based Air raised an undisclosed seed round in October 2017 from media and tech investors and early stage funds.

The app is available for iOS-only for now, here on the App Store.