Current, the startup behind an app-controlled debit card aimed at tweens and teens, is adding new strategic investor Fifth Third Capital, a direct equity investment subsidiary of Fifth Third Bancorp, to its recent Series A round of funding. The investment wasn’t directly disclosed, but we’ve learned it’s $1 million.

In October, Current announced it had closed on $5 million in Series A funding in a round led by QED Investors, with Cota Capital also participating.

The new investment from Fifth Thirds brings the total of the Series A to $6 million and the total raised by the company to date to $10 million.

The company makes a smart debit card for kids that works with an app on parents’ smartphones where they can automate allowance transfers and optionally set up tasks and chores that have to be completed before allowance is paid. The child then receives the “cash” on a Visa-branded debit card, which allows them to shop online or in-stores.

These additional tools set Current’s card apart from other “kid debit cards” like Visa Buxx, as it’s not simply a way to give money to kids on plastic – it’s a whole system for teaching them about money and responsibility.

While the card does give kids the feeling of autonomy, as cash does, parents can choose to enable additional protections on how the money can be used for extra control. For example, they can disable certain categories of spending – like plane tickets – as well as set daily spending limits, or limits on ATM cash withdrawals, among other things. 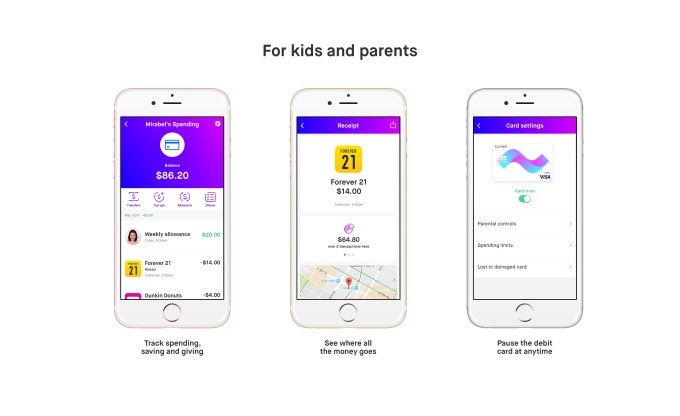 Current doesn’t disclose how many subscribers it has (it costs $3/month per child, if not on a family plan for reduced pricing), but does note there are now 30 million teenagers in the U.S. with 5 million more aging into the demographic every year. These teens are already growing up in a largely cashless society here in the U.S., are comfortable using apps on smartphones, and are often the ones informing their families about the latest changes in finance, like with cryptocurrencies.

“Current’s approach addresses an unmet need as the digitization of payments becomes increasingly popular with this young demographic,” said Vanessa Indriolo Vreeland, head of acquisitions and strategic investments for Fifth Third Capital, in a statement about the firm’s new investment. “Fifth Third has a commitment to educating kids from an early age about how to manage their finances. Current helps guide parents as they teach their teens how to spend, save and give, all within a well-designed platform. It’s a natural fit for us to invest in this young and promising company,” she said.

In a way, Current is carving out a new family banking category, but it’s not the only company doing so. Greenlight Financial also launched a smart debit card for kids, that includes a similar set of controls.

However, as a Current user myself (disclosure!), I found that I preferred the look of Current’s app, which feels fresher and more modern. The card itself, too, is more attractive, and less likely to be confused with parents’ with its white background and colorful pink and blue swirls. I also appreciated that Current’s app includes a section on “Giving,” which can help teach kids about charitable donations, when the time comes.