Unfortunately for cord cutters, the company is tweaking its pricing plan, too. Next month, YouTube TV will cost $5 more per month, bringing it more in line with competitors at $40 per month for new sign-ups.

The good news is that existing YouTube TV subscribers will remain grandfathered in to the current $35 per month plan, which today includes access to over 50 networks like ABC, CBS, FOX, NBC, CW, ESPN, AMC, FX, FXX, Disney Channel (plus Disney Jr. and XD), E!, USA, Bravo, Syfy, MSNBC, Telemundo, Sprout, Freeform, NatGeo, and others, including some regional sports networks.

In addition, those who sign up before the new pricing kicks in on March 15, 2018, will also be able to keep YouTube TV for the current $35/month price. 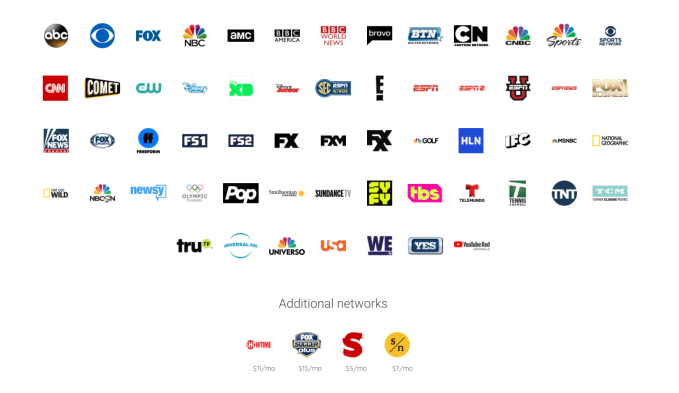 Above: All of YouTube TV’s networks available today, including the new Turner channels

The company says the decision to adjust the pricing was not necessarily due to the cost of the new networks.

“This is really an adjustment to the market skinny bundle that has evolved and market pricing,” explains Heather Moosnick, Director of Content Partnerships at YouTube TV. “We went out with a ‘skinnier’ bundle than others because we were very sensitive to price – particularly since our goal is to get users who have never subscribed to cable – or who have cut the cord – back to subscribing to live TV,” she says.

The YouTube TV demographic is, in fact, very young.

While YouTube won’t confirm the recent reports that its service is trailing Hulu Live TV with just over 300,000 users to Hulu Live’s 450,000, it would say that the majority of YouTube TV subscribers are 35 or under.

“The majority of users are millennials, and that makes sense because we’re really building this service for YouTube users, for video streamers, and for this next generation who have decided that they love live TV, but not the way it’s delivered,” Moosnick says. 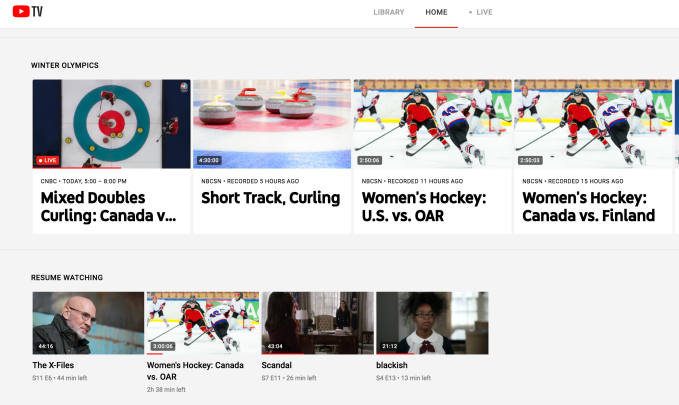 With the new additions, YouTube TV will gain a number of channels younger users may prefer. For example, CNN attracts an audience that’s seven years younger than Fox News and five years younger than MSNBC in primetime. Turner has also been shifting its programming in recent years to reach younger viewers. While total viewership may have been impacted by cord cutting, Turner’s TNT and TBS both now reach a younger overall audience, the company has said.

Another key change with the new additions is the increased access to sports programming.

And in a few months, YouTube TV will offer the ability to subscribe to NBA League Pass for watching out-of-market live games, as well as the streaming service MLB.TV.

The ability to further customize the YouTube TV experience through add-on subscriptions isn’t new. The service today offers Showtime, Fox Soccer Plus, Shudder, and Sundance Now for additional monthly charges. But this a la carte programming model is something YouTube TV plans to heavily pursue in the future as it builds out the service. 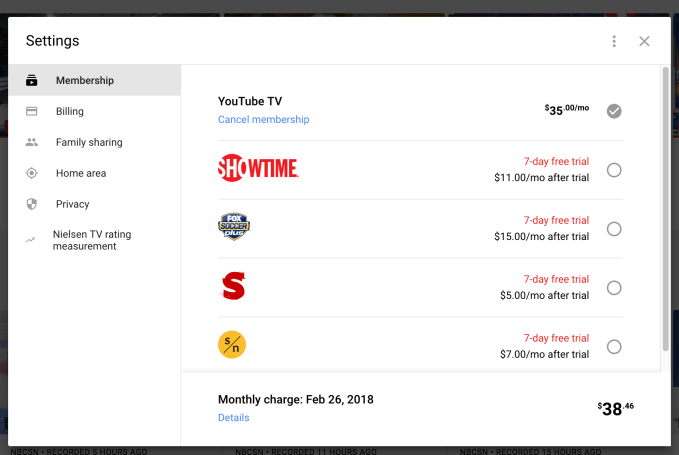 “We are planning on adding more content as buy-throughs,” Moosnick confirms. “There’s no reason not to do that…I’d expect to see more content coming into the ecosystem as a la carte and buy-through channels. We’re excited about that because it provides users with more optionality within a [user interface] and experience that is of high-quality and super reliable,” she adds.

The benefit in a la carte isn’t only in the increased revenue per user, but also the ability to further personalize YouTube TV’s recommendations, Moosnick notes.

However, the way YouTube TV will sell future add-ons may not always be as it is today – a model similar to Amazon Channels, where users pick and choose additions one-by-one. The company is also exploring the Sling TV-like idea of bundling channels into low-cost add-ons, Moosnick says.

“We’re open to individual channels – but if the best way to bring them is through packages, then we’ll be looking to do that,” she says.

Alongside the programming and pricing announcements, YouTube TV says the service is now available in all top 100 U.S. markets, or 85 percent of the country.

Most markets have the big four broadcast networks available (NBC, CBS, ABC and FOX), and a large percentage have at least three.

Still, there’s a lot of competition today in the streaming TV space – DirecTV Now, Sling TV, Hulu Live TV, PlayStation Vue. fuboTV, and Philo are all challengers of a sort. But YouTube aims to compete not just on lineup and feature set (cloud DVR, family sharing, e.g), but also on the quality and stability of the signal.

Service quality issues have plagued a number of rival services at terrible times. Most recently, for example, Hulu Live TV crashed for some viewers at the end of the Super Bowl.

In the future, YouTube TV may consider bundling its service in new ways, too, as a way to increase distribution.

“We’re always looking for new ways to let users know about our service and to partner with others to make it more convenient for users to buy the subscription….We’re very interested in working with partners to make it easier to get YouTube TV,” Moosnick hints.