Facebook’s status update box is getting a new feature called Lists, which begins rolling out today. This is the first major update to the entry field since the launch of colored backgrounds just over a year ago, and also serves as a way to encourage Facebook users to share more personal content. The feature, like it sounds, lets users make lists of anything they choose – New Year’s Resolutions, To Do’s, restaurants to try, travel ideas, and more.

Users can create their own lists with colored backgrounds, and decorate them with emoji.

The lists are also designed with the idea that friends could copy each other’s lists to share their own opinions about the subject at hand. 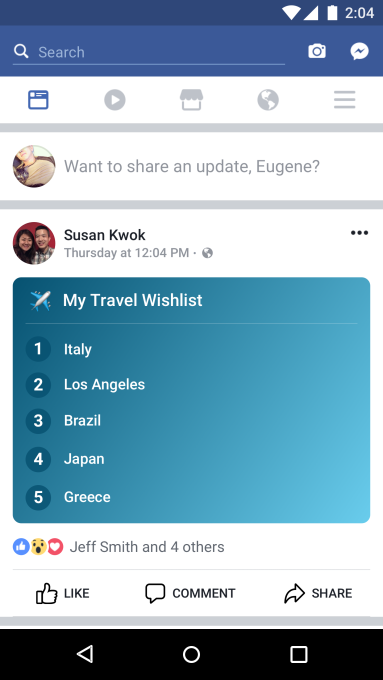 The feature is not yet broadly available, as it’s a slow global rollout starting today, we understand.

The addition appears as a part of the “What’s on your mind?” (status update) box as another option alongside things like Polls, Feeling/Activity, Photo/Video, Check In, GIF, and other items.

The goal with features like these is to push users to post more personal updates – like stories about their lives, what they’re up to, and what they’re thinking. These types of posts were once Facebook’s bread-and-butter, and enticed friends to log back in to see what others were saying. But over the years, Facebook’s News Feed has filled with videos, links, news, memes, updates from Facebook Pages, and, of course, ads. 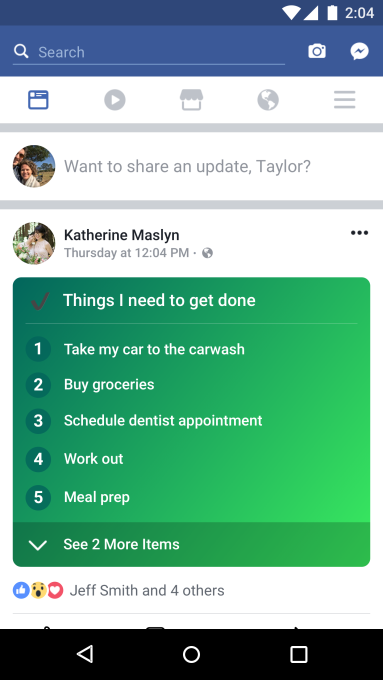 Facebook today is trying to solve the problem of too much non-personal content in its News Feed.

Recently, it said it’s tweaking the News Feed algorithm to show more posts from users’ friends and family, and fewer from brands and publishers. But one problem with that strategy is that people have been posting less personal content over the years.

A report from The Information released in December 2016 said that personal updates had declined 15 percent over the year, and had declined 21 percent from mid-2014 to mid-2015.

On top of this, Facebook’s younger user base is also in decline. According to a report from eMarketer this week, Facebook lost approximately 2.8 million U.S. users under 25 in 2017, and will lose around 2.1 million more this year.

With the hopes of reversing this trend, Facebook has been developing features to appeal to younger users. For example, it bought the viral app tbh in October 2017 and then quickly rolled out a Q&A feature similar to tbh’s in the News Feed. Lists also feel like the sort of thing that will appeal to younger users, though they could help anyone call more attention to their posts – like the colored backgrounds now do.

Facebook did not give an ETA as to when the rollout would complete, but Lists will begin appearing for some subset of users beginning today.