WhatsApp has begun testing a new payments feature in India that will allow people to send money to other WhatsApp users, excluding merchant accounts. The feature is currently in beta, according to sources familiar with the company’s plans, but hasn’t been publicly announced because it’s not widely available at this time.

The company has been  working on support for a payments feature for some time, which would take advantage of UPI (Unified Payments Interface) and include support by a number of Indian banks, including State Bank of India, ICICI Bank, HDFC Bank, and Axis Bank.

Beta testers have now found that this functionality is live, with a large list of supported banks displayed in the WhatsApp user interface. 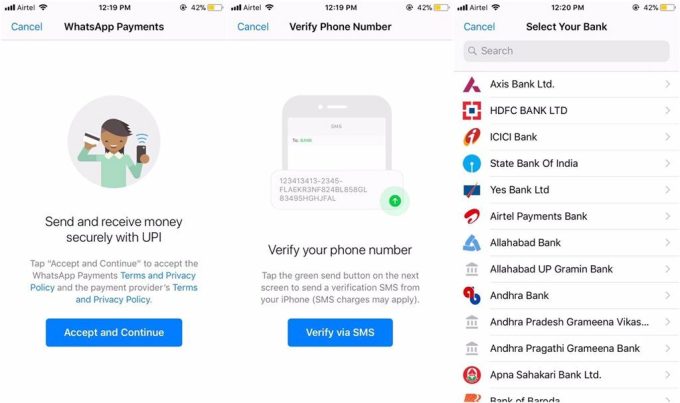 According to screenshots posted to Twitter and elsewhere, including this post from the blog iPhoneHacks, those who have gained access to the new functionality will see a payments feature appear in their WhatsApp Settings menu.

CONFIRMED!!! #IOS #ANDROID
If this option does not appear for you yet, please wait ?? https://t.co/srAKgNdLzl

Users must then configure the feature by first verifying their phone number via SMS and choosing a bank. The option to send a payment is then available from the main WhatsApp interface, in the same area where you can also share a photo, video, file, contact or location into your chat session.

The Facebook-owned company had received approval from the Indian government to integrate UPI into its messaging service last July in order to implement payments, according to The Economic Times.

The addition puts WhatsApp into competition with other messaging services that already support payments, including the recently launched Tez from Google and Tencent-backed Hike, for example, as well as digital wallet platform Paytm, which expanded into messaging in order to take on WhatsApp more directly.

However, WhatsApp’s support for payments is highly anticipated because of the app’s huge popularity among Indian users. India is WhatsApp’s largest market with over 200 million users active daily users. In fact, it’s so heavily used in that country that it’s even led to issues as Indians grapple with the social norms involving daily messaging ranging from phones’ storage filling up with “good morning” messages, to drama over exiting family group chats.

The potential for WhatsApp to dominate Indian P2P payments is strong, given that millions of people have come online in the region thanks to lower-cost data plans and cheap smartphones. The country even surpassed the U.S. for combined iOS and Android downloads for the first time in Q4 2017, according to App Annie, as smartphone adoption is surging.

We understand that WhatsApp will let users know when P2P payments becomes more widely available in India, after the best testing phase completes.