Homebuying ain’t easy. And if you’re a member of the LGBTQ community relocating from an area you know well, you’ve got a whole other set of concerns to worry about. Apparently, with the launch of a new tool geared toward homebuyers who might face discrimination on the basis of their gender or sexual orientation, real estate listing company Trulia is taking those concerns seriously. 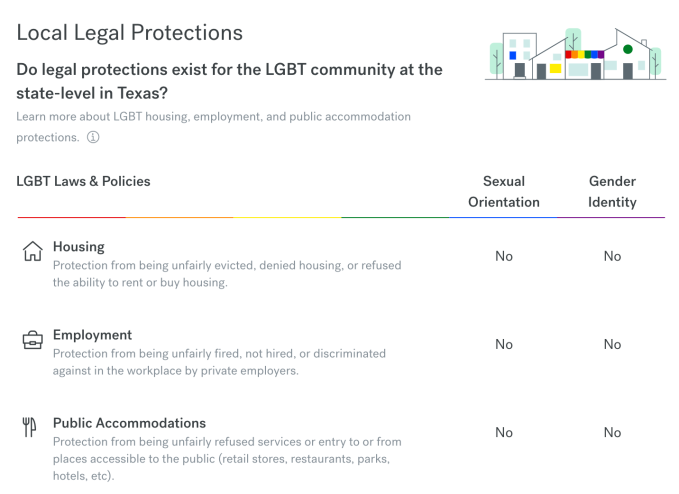 “With the Local Legal Protections feature available on all property details pages on Trulia, homebuyers will know if their prospective new home is in a place where there are laws to prevent discrimination based on sexual orientation and gender identity in the areas of housing, employment, and public accommodations,” Trulia general manager and senior vice president Tim Correia wrote in a blog post announcing the tool.

The feature is simple, offering a “yes” or “no” to three sections addressing legal status for LGBTQ people in the area of the listing: Housing, employment and public accommodations. Housing refers to “Protection from being unfairly evicted, denied housing, or refused the ability to rent or buy housing,” while the Employment section addresses local workplace protections (or lack thereof) for LGBTQ workers. The third, Public Accommodations, addresses local laws offering protection from being denied services or entry to public spaces (retail shops, etc.).

The feature was home-brewed during something Trulia calls “innovation week,” where employees come together to share progress and collaborate on ideas. The company’s own internal Pride group helped build the feature out and it draws from data collected by the Movement Advancement Project, a nonprofit that works to advance non-discrimination policies for LGBTQ people in the U.S.

“Currently, national housing and employment non-discrimination laws only protect some classes, such as sex, race, age, color, religion, and national origin,” Correia writes. “That means explicit protections for people who identify as LGBT do not exist at the federal level and are inconsistent at the state and local levels.”

As a queer person myself, genuinely helpful and normalizing tools like these are always refreshing. All Trulia listings now include the new data, indicating that the company views this as an uncontroversial asset for its diverse user base, not as something politically contentious targeted only toward users in LGBTQ-friendly regions.

Odds are if you’re a queer person moving to a new state this won’t be the only research you do on your rights locally, but it’s still handy at a glance. Beyond the current tool, it’s nice to hear that Trulia intends to build out from this simple feature to make its platform more inclusive moving forward.

“We are proud of this new feature, but acknowledge that the LGBT community isn’t the only group without explicit federal protections,” Correia said. “LGBT specific data is a starting point for our Local Legal Protections feature. We’re always looking into data sources that will give house hunters the information they need to find the right place to live.”