Google announced today it’s adding a series of features to Google Search and other products to help users looking for the latest information about the Pyeongchang 2018 Olympic Winter Games.

As the company often does for major events, extra information will begin to appear at the top of Google Search results after being triggered by various keywords and search terms. In addition, Google will connect users to live video, VR video, plus Google Earth and Street View imagery related to the Winter Games.

For example, if you search for Winter Olympics, Google will return a list of the various sports as small thumbnails you can click into to get updates – like which athletes won. It will also use your current location to provide updates about your country’s own ranking in terms of medals count, as well as display the top news stories from the Games, and more.

Also notable is how Google is incorporating YouTube into the search results.

In the US, Google’s over-the-top streaming service for cord cutters, YouTube TV, will stream live coverage of the Olympics. And in India, Pakistan, Bangladesh, Sri Lanka, Bhutan, Maldives and Nepal, the Winter Games will be aired live for free for the first time on the Olympic Channel on YouTube.

VR coverage is also available for YouTube TV subscribers, who can now use their credentials to log into the NBC Sports VR app. The app will offer the ability to stream over 50 hours of NBC’s live video coverage, including the Opening Ceremony, alpine skiing, ice hockey, figure skating, snowboarding, curling and more. 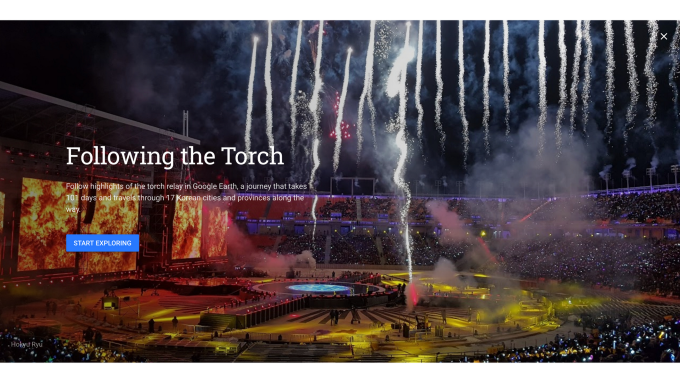 Google has integrated Olympics content into Google Earth and Street View, too. In the former, there’s now a “sports” category in the Google Earth Voyager educational feature that will include five stories about the Winter Games, like ski jumping destinations, the Olympic Torch relay, and travel itineraries in South Korea.

Street View, meanwhile, has been updated with new imagery of the stadiums, plus the towns and cities near Pyeongchang.

Google Assistant will answer questions about the Olympics as well – something its rival Alexa is also now offering. And NBC is launching an Olympics-themed trivia game for the Google Assistant platform, too.