YouTube today said it’s launching a change to its service that will offer viewers more transparency around where news broadcasters get their funding. According to a company announcement, YouTube will now add notices below videos that are uploaded by broadcasters who receive some level of government or public funding.

“Our goal is to equip users with additional information to help them better understand the sources of news content that they choose to watch on YouTube,” explained Geoff Samek, Senior Product Manager YouTube News, in the company’s blog post.

The feature’s launch was earlier reported by The WSJ, which explained how the change may help to tackle the ongoing “fake news” problem that’s spanning the web, where fringe conspiracy theories and propaganda are often given equal visibility and attention as legitimate news sources.

The change will affect sources like the U.S.’s Public Broadcasting Service (PBS), but will also increase the visibility around foreign state news organizations, like Russia’s RT. As The WSJ also pointed out, U.S. intelligence officials dubbed RT “the Kremlin’s principal international propaganda outlet.”

This new label will initially appear only to users in the U.S., and it may not always be accurate.

A “Send Feedback” form will also be available in the case that issues with attribution arise, YouTube says. 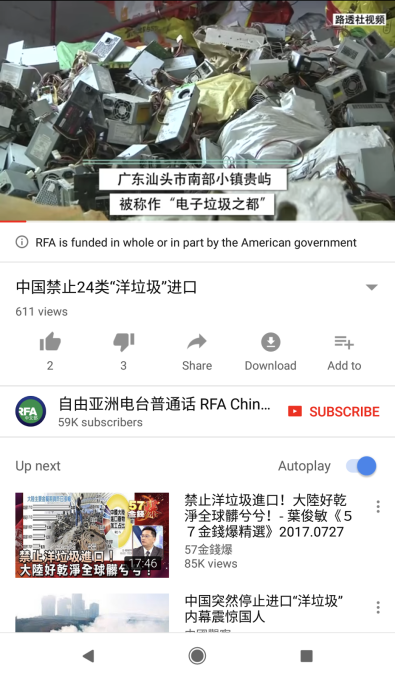 While increasing the transparency around government-funded news reporting will help, to some extent, in providing more context around news videos on YouTube’s site, it doesn’t at all go far enough to address the larger issue with fake news, conspiracy theories, or other content that’s designed to influence public opinion for either financial or political gain.

However, YouTube says that addressing the fake news problem is one of several goals it has for 2018.

As part of its efforts in tightening its content policies, the company says it’s planning to work with news partners to roll out more solutions to highlight authoritative news sources on its site in 2018.

YouTube claims it has already made progress in this area by better surfacing content from authoritative news sources on the homepage in a new “Breaking News” section as well as in search.

This goal was announced alongside several others this morning, as part of YouTube’s to-do list for the year.

Other initiatives include better communication with creators, giving creators better monetization tools, the expansion of social features like the Community tab and Reels, and increased investment in educational content.