Thirty-nine million Americans now own a smart speaker device, but the voice app ecosystem is still developing. While Alexa today has over 25,000 skills available, a number of companies haven’t yet built a skill for the platform, or offer only a very basic skill that doesn’t work that well. That’s where the startup Storyline comes in. The company is offering an easy to use, drag-and-drop visual interface for building Amazon Alexa skills that doesn’t require you to have knowledge of coding.

As the company describes it, they’re building the “Weebly for voice apps” – a reference to the drag-and-drop website building platform that’s now a popular way for non-developers to create websites without code.

Storyline was co-founded in September 2017 by Vasili Shynkarenka (CEO) and Maksim Abramchuk (CTO). Hailing from Belarus, the two had previously run a software development agency that built chat-based applications, including chatbots and voice apps, for their clients.

Their work led them to come up with Storyline, explains Vasili.

“We realized there was this big struggle with creating conversational apps,” he says. “We learned that creative people and content creators are not really good at writing code. That was the major insight.” 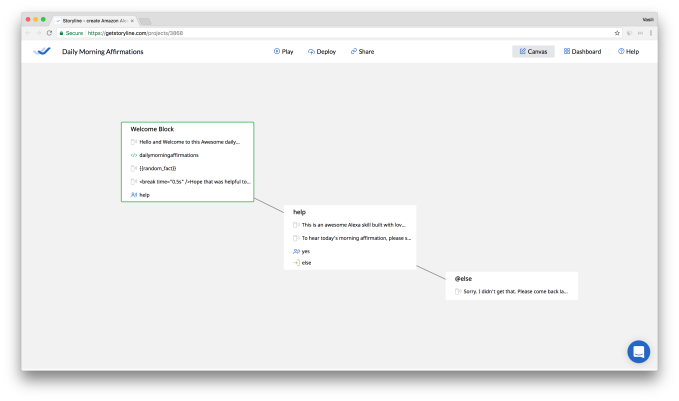 The company is targeting brands, businesses and individuals who want to reach their customers – or, in the case of publishers, their readers – using a voice platform like Alexa, and later, Google Home.

The software itself is designed to be very simple, and can be used to create either a custom skill or a Flash Briefing.

For the most basic skill, it only takes five to seven minutes, notes Vasili.

To get started with Storyline, you sign up for an account, then click which type of skill you want to build – either a Flash Briefing or custom skill. You then provide some basic information like the skill’s name and language, and it launches into a canvas where you can begin creating the skill’s conversational workflow.

Here, you’ll see a block you click on and customize by entering in your own text. This would be the first thing your voice app says when launched, like “Hello, welcome to…” followed by the app’s name, for example.

You edit this and other blocks of text in the panel on the left side of the screen, while Storyline presents a visual overview of the conversation flow on the right.

In the editing panel, you continue to click on other buttons to add more voice interactions – like other questions the skill will ask, user responses, and Alexa’s reply to those.

Each of these items is connected to one of the text blocks on the main screen, as a flow chart of sorts. You can also configure how the skill should respond if the user says something unexpected.

When you’re finished, you can test the skill in a browser by clicking “Play.” That way, you can hear how the skill sounds and test various user responses. 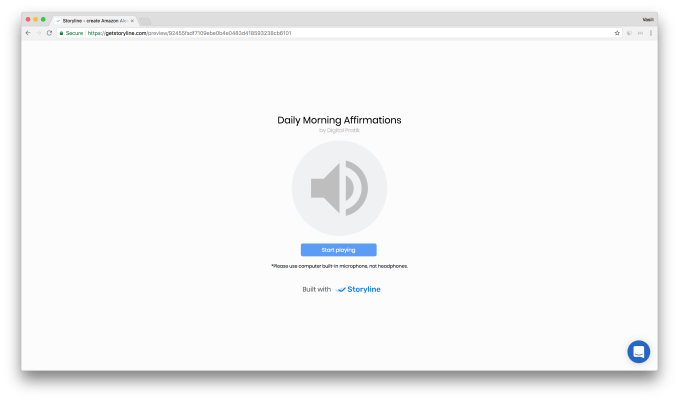 Once satisfied that your skill is ready to go, you click the “Deploy” button to publish. This redirects you to Amazon where you sign in with your Amazon account and publish. (If you don’t have an Amazon Developer account, Storyline will guide you to create one.)

This sort of visual skill development system may be easier to manage for simpler skills that have a limited number of questions and responses, but the startup says that even more advanced skills have been built using its service.

It was also used by two of the finalists in the Alexa Skills Challenge: Kids.

Since launching the first version of Storyline in October 2017, some 3,000 people have signed up for an account, and have created roughly the same number of skills. Around 200 of those have gone live to Amazon’s Skill Store.

Storyline isn’t the only company focused on helping businesses build voice apps without code these days, however.

For example, Sayspring lets designers create voice-enabled apps without code, as well, but instead of publishing the skill directly, it’s meant to be the first step in the voice app creation process. It’s where designers can flesh out how a skill should work before handing off the coding to a development team.

Vasili says this is a big differentiator between the two companies.

“Prototyping tools are great to play with and explain ideas, but it’s super hard to retain users by being a prototyping tool – because they use the tool to prototype and then that’s it,” he explains. With Storyline, customers will stay throughout the process of launching and iterating upon their voice app, he states. “We can use data from when the skill is published to improve the design,” notes Vasili.

Currently, the included analytics don’t do this – they only track users, sessions, and interactions. But the plan is to augment them over time with more capabilities.

Storyline today is free to use. But it will next week launch its first premium feature focused on scheduling posts in Flash Briefings.

Later, it will also roll out templates to speed up the skill building process for things like briefings, games (including trivia games), and more.

And it will eventually tackle publishing to other voice platforms, like Google Home.

The startup is currently participating in Y Combinator’s Winter 2018 class, and is backed by both YC and Adam Draper’s Boost VC.