Crypto investors are seeing red this week. Bitcoin plunged to two-month lows on Thursday, dipping below $9,000 for the first time since November. At the time of writing, Bitcoin had bounced back up to the $9,200 level, down from weekly highs just above $12,000. This week has seen coins across the board in the red — a sign that investors are jumping ship to fiat currencies this time instead of swapping into altcoins as we’ve seen in the recent past. 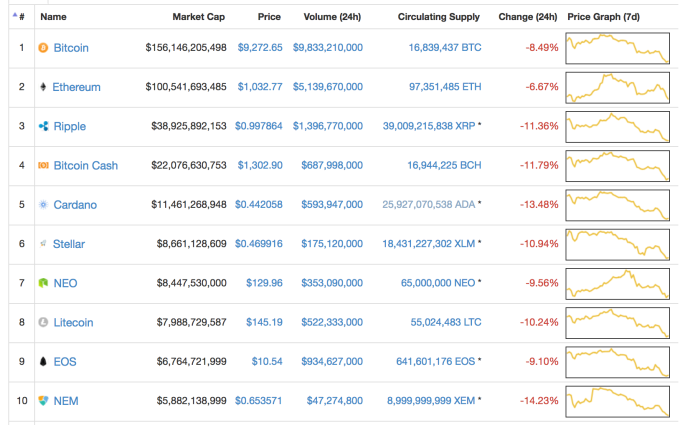 At the time of writing, the total cryptocurrency market cap weighed in at $459 billion, down from January highs around $830 billion. It’s a contraction to be sure, but not a low for the last 30 days (that low came on January 18).

Is this the bitter end for Bitcoin? For cryptos? Well, no, probably not. Get your head screwed on right and you’ll see that (for better or worse) many coins have seen unprecedented growth in the last six months to a year, even with Bitcoin’s price halved from holiday highs closer to $20,000. On this day last year, Bitcoin was sitting pretty at $982. At the height of December’s craze, most reasonable crypto-watchers could agree that the price was overheated and there was only one way for it to go in the short term. Still, in the thick of the current correction, Bitcoin’s longer-term growth is anyone’s guess.

Cryptocurrency die-hards expecting the price to bounce back, even partially, will see these tanking numbers as the perfect entry point for getting in low and maximizing gains. Late speculators who got in during the mass crypto hysteria of the holiday season aren’t likely to have such steady hands, a factor that’s likely contributing to the slide.

So what’s causing the slide to begin with? As usual, no one thing can be blamed for Bitcoin’s current downturn, but recent skittishness around a subpoena for Bitfinex and concerns around Tether — a kind of cryptocurrency counterpart to USD that matches the dollar one to one — probably factor in. Recent news that Facebook would ban ads for ICOs probably didn’t help either. And it seems like every day a new Ponzi scheme gets busted, throwing yet more doubt on the credibility of plenty of less than legit ICOs.

In India, new comments this week from Indian Finance Minister Arun Jaitley were widely interpreted as a harsh crackdown on cryptocurrency, inspiring broad regulatory fears on an international scale. “The government does not recognize cryptocurrency as legal tender or coin and will take all measures to eliminate the use of these crypto-assets in financing illegitimate activities or as part of the payment system,” Jaitley said during a budget speech in which he also expressed interest in blockchain technology. While his comments focused on illegitimate activity, reports suggesting the statement signaled a broader cryptocurrency ban indicate a need for further clarification from Jaitley. In South Korea, previously announced “know your customer” rules on real-name cryptocurrency trading also went into effect this week.

These growing pains are far from surprising. As cryptocurrencies mature — assuming they continue to do so — regulatory “bad” news will become more common as countries across the globe struggle to accommodate their citizens’ sudden interest in digital currencies. Unsurprisingly, that regulatory interest creates a sense of foreboding among cryptocurrency enthusiasts. Fear, perhaps justified fear for many speculators with too much to lose, amplifies each new regulatory revelation, even when the news is good for the long term adoption of digital currencies. But for cryptocurrencies to grow out of the current scam-laden chaotic era, a thorough house cleaning is healthy.

Bitcoin and other cryptocurrencies have also looked less responsive to positive news in the latter half of January compared to their relative buoyancy during December’s dizzying highs. Then, every little positive news blip seemed to push the prices higher. It’s also worth remembering that even beyond news cycle price influence, Bitcoin has seen a few mid-January dips before, though 2017’s Bitcoin behavior certainly broke from any seasonal patterns of the past.

Bitcoin aside, some altcoins might just be adjusting from overheated, overhyped December highs. Ripple is a good example of this, hovering around $1 Thursday, a price that’s five times its November value and only looks bad after XRP flew a bit too close to the sun with sudden early January highs above $3. Ethereum is also faring pretty well, all things considered, down from all-time highs above $1,400 but holding most of its newly built value after doubling in price from December prices around $500.

It’ll be interesting to see what happens as we move into next week’s Senate Banking Committee hearings on cryptocurrency. Titled “Virtual Currencies: The Oversight Role of the U.S. Securities and Exchange Commission and the U.S. Commodity Futures Trading Commission,” the open hearings will air on February 6 at 10:00 Eastern time. It’s possible that the upcoming discussion in Congress has traders nervous, but ultimately variables from all over the globe combine to affect the market every day.

For anyone considering riding out the current correction, a little historical perspective — in this case, even a few months’ worth — could go a long way.

Disclosure: The author holds a small position in some cryptocurrencies. Regrettably, it is not enough for a Lambo.