Snap Inc. just launched a merchandise store. The goal isn’t to make money yet, but it proves the potential for an in-app commerce platform for other brands.

Today the company opened the Snap Store, which lives in the Snapchat app’s Discover section and lets you buy Snapchat merchandise, like a $20 Dancing Hot Dog Plushie or a $30 Dog Lens T-Shirt. You can scan the Snap Code below with the Snapchat camera to open the store and buy exclusive items that will only be available for a limited time. Click here on mobile to open the in-app store.

This isn’t designed to be a serious revenue stream for Snap Inc., though, despite it missing revenue targets last quarter. A Snapchat spokesperson gave no official comment, but told me this is something the company does for its community. Essentially, it’s a way to drive brand loyalty, though it also earns Snap some free marketing as people wear the gear.

But if Snap can use its own Snap Store to prove the potential for in-app e-commerce, it could potentially develop a real revenue stream around charging brands a cut of what they sell on Snapchat or getting them to buy ads promoting their stores. 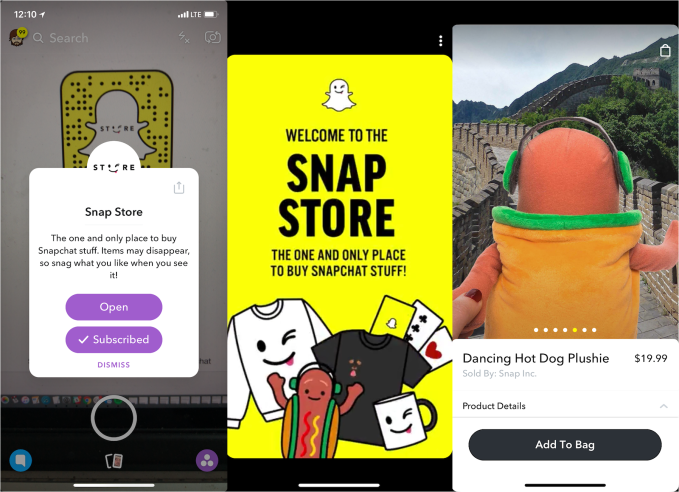 Snapchat has previously sold a few items, like a Ghostface Chillah backpack and Dancing Hot Dog Halloween costume on Amazon, and it sold its Spectacles camera sunglasses through its Snap Bots, pop-up shops, retail partnerships and online. But now Snap is running its own sales of the third-party manufactured merchandise, and appears to have pulled everything but Spectacles off of Amazon.

Users can visit the Snap Store’s site for the Snapcode (also below), and subscribe when they first open the in-app store to see it pop up in the Discover section when new items become available. The next product drop happens on February 8th. We got tipped off to the store’s launch by reader Moshe Isaacian. 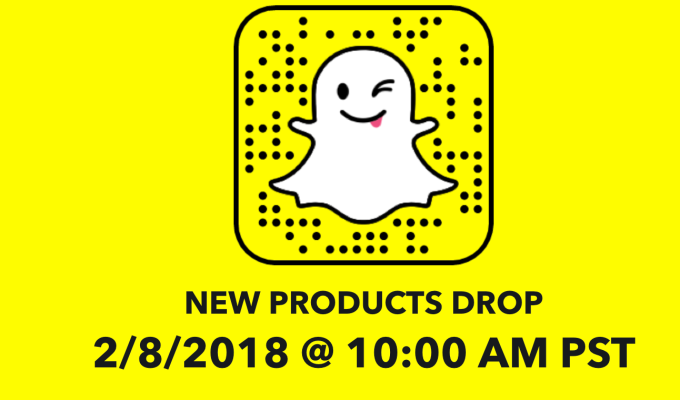 The current product offerings are:

It would have to sell a ton of these to make any dent in the revenue expectations Wall Street places on the company to justify its $16.7 billion market cap. Still, after a great morning for its share price following Facebook announcing its first-ever decline in U.S. users yesterday and its slowest-ever user growth, investors push $Snap higher on news of the store’s launch.

I bought a Dancing Hot Dog… for science. Check-out happens entirely within the app, and Snapchat prompts you to save your payment details. That means it could be building up a database of credit cards to facilitate future purchases. The fact that this was built by Snap product designer Trevor Denton, who previously worked on Starbucks’ coffee ordering app, signals that this isn’t just some throwaway project for the company.

Commerce on mobile can be incredibly annoying. Between slow-loading websites, a paralyzing array of choices and having to punch in all your payment details, tons of users drop-off before they hit Buy. Snapchat could poise itself as a way for top brands to reach a premium teen audience in a way that makes shopping a seamless part of the social experience.