Awesomeness, the digital media company acquired by Comcast for $3.8 billion in 2016, is today bringing kid-friendly programming, including original content, to Amazon Prime subscribers with the launch of DreamWorksTV on Amazon Channels. The new subscription service is aimed at kids ages 6 through 12 and will cost $4.99 per month after a 7-day free trial period.

Until now, DreamWorksTV has only been available on YouTube, where it launched in 2014. That channel has since grown to over 3.6 million subscribers, and produced more than 100 live action and animated series, the company says.

In addition to the expanded availability of DreamWorksTV content, the new channel will introduce a range of original series exclusively for Amazon.

Similar to traditional network TV, new episodes from these shows will debut every week, so there’s a regular influx of content.

Other shows on DreamWorksTV, like OMG! or I Pranked My Parents, for example, have previously been available for free to Prime subscribers, as part of Prime Video. They’re currently showing in the Amazon Prime Video app as available to stream with Prime, but on Amazon’s site, they’re showing as available through the new DreamWorksTV channel.

DreamWorksTV tells us that existing content will continue to remain free on Amazon Prime, but new seasons will only be available on the subscription service.

That was a clever move – the free access may have gotten kids hooked on the content, and now they’ll beg parents to pay. (NO ONE TELL MY KID.) 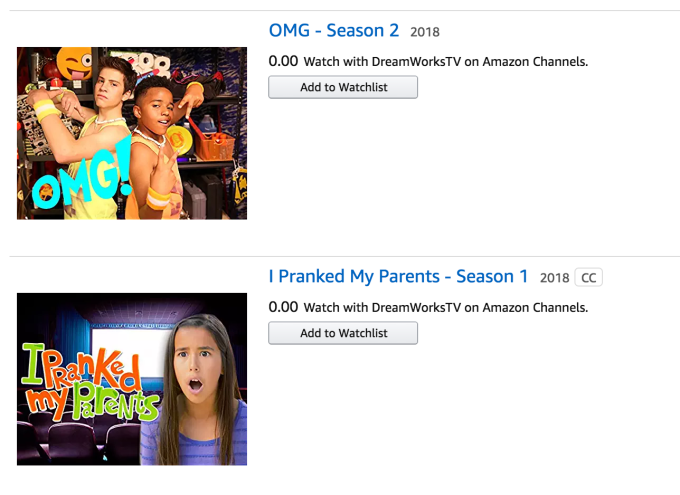 DreamWorksTV is one piece of Awesomeness’ larger media company, which also includes AwesomenessTV, Awestruck, film and television studio arms, a creator network and creative agency. The company aims to target a young, Gen Z audience with its programming across its digital networks.

“As we continue to grow the DreamWorksTV brand, this is an exciting step for us to explore revenue streams and brand engagement across platforms,” said Birk Rawlings, Head of DreamWorksTV, in a statement about the launch. “We are excited to team up with Amazon Channels as they have a highly recognized and sought-after entertainment brand that has a huge opportunity in the kids space for compelling, exclusive, and original content – all of which this channel delivers.”

Amazon has been steadily adding premium programming options to Amazon Channels, in an effort to build an alternative to today’s streaming TV services like Sling TV, Hulu Live TV, or YouTube TV, for example. Instead of offering a skinny bundle of channels for a low price, Amazon offers a Netflix-like library of on-demand content through Prime Video, then lets Prime users pick and choose the other channels they want to add.