At first, I wasn’t impressed by The Shape of Water‘s visual effects.

That might seem like a strange thing to say about a movie whose effects  have been nominated for multiple awards (though not an Oscar, despite the film’s 13 nominations). What I mean is this: When I was watching, I never wondered about the technology behind the merman — the sometimes-monstrous, sometimes-beautiful aquatic character inspired by the Creature from the Black Lagoon.

I knew that Doug Jones (who has a long history of playing monsters for director Guillermo del Toro) had the role, and whenever I saw the merman, I assumed Jones was really there on set, wearing the costume as his character was tortured in a government lab by Michael Shannon’s Col. Strickland, or as he formed a relationship with the kind, mute janitor Elisa, played by Sally Hawkins.

It turns out that Jones’ impressive costume and makeup (and his equally impressive performance) only account for part of what we see on-screen. Trey Harrell, CG supervisor at visual effects house Mr. X, told me, “Every single shot of the film where you see the creature is a visual effects shot.”

After all, Harrell said that while “Doug is an amazing actor,” his face was also hidden under “ a half inch of foam latex.” So at the very least, Mr. X had to create the merman’s eye and face movements. In other instances, like when the merman was viewed swimming inside the lab’s capsule, Mr. X was responsible for the entire creature. 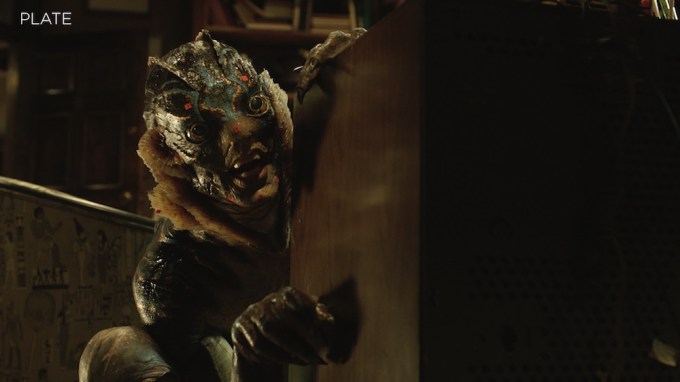 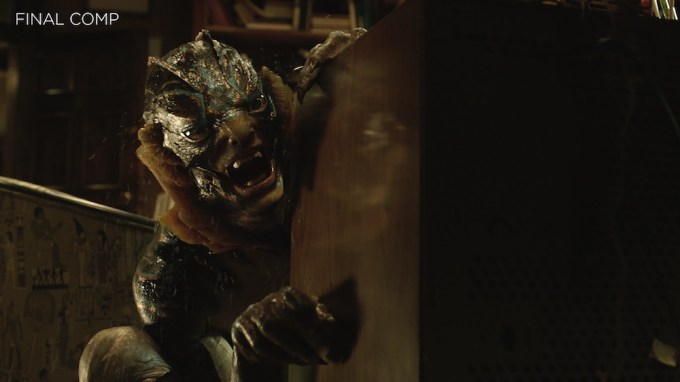 Mr. X’s work may have been less noticeable because Harrell said he “wanted people to believe” that it was all a combination of Jones’ performance and practical effects, rather than CG.

“We weren’t going for a hyperreal, CG creature,” he said. “We wanted it to be something that plausibly looked like foam latex and silicon prosthetics, a performance that could plausibly be shot on the day.”

That meant being careful about how the merman moved. In fact, Harrell said his team performed “hundreds of scans” of Jones, creating a “Doug Jones animation rig” — so whenever they designed a CG motion for the merman, they could use the rig to see if the motion felt believable for an actor in costume.

Harrell, who’s also worked on del Toro projects The Strain and Crimson Peak, said it’s part of the director’s style to “capture as much as possible in camera,” rather than relying on green screen and CG.

“You know, those of us who are a certain age, our eyes are more attuned to that,” he added. “We just find that style a little more aesthetically pleasing.”

That doesn’t mean Harrell is always in favor of practical, or practical-looking, effects: “You’re starting to see smaller, more personal projects take the best of both worlds. I personally don’t think it’s a binary argument. I’ve also got a background in practical prosthetics and makeup. I’m a fan of having a big toolbox.”

Besides augmenting the merman, Harrell said other effects challenges included creating water effects for the opening sequence and other scenes that were shot “dry for wet” (in other words, they weren’t actually underwater), and adding damage to a classic car.

Mr. X was the only visual effects house that worked on the film — maybe a necessity with The Shape of Water‘s relatively small, sub-$20 million budget, but Harrell said he “loved the hell” out of working on the film because it meant “not having a corporate infrastructure between you and the director.”

“I like smaller films that make me feel stuff,” he added.